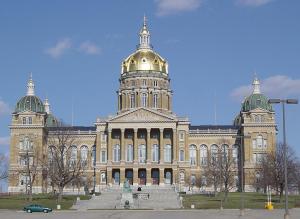 The Capitol in Des Moines.

The Iowa caucuses are over!

For the last week, presidential candidates have zoomed around Iowa making speeches and glib promises. The media have been here.  David Muir anchored the ABC news in front of the Capitol building in Des Moines.  He was charming, relaxed, well-informed, and uncondescending.  We switched to ABC from CBS, where Scott Pelley grumbled and said that Iowa didn’t matter.

I don’t know about that.  Bernie and Hillary are tied in Iowa. That means something.

I always vote in the election, but did not attend the caucus last night.  I do not really care to stand in a gym for two hours and raise my hand for a candidate. I also had  divided loyalties.  I had planned to caucus for Hillary in memory of my mother, who idolized her and even kept her Caucus for Hillary kit from 2008.  My mother, however, also disliked the caucuses, ande only attended onece, for Ted Kennedy.

But I had a revelation.

I love Hillary, but Bernie represents the vision of America held by my deepest, truest self.  I have always called myself a socialist, and I never thought a socialist would get this far.  I was raised in Iowa City, where I breathed the air of feminism,  pacifism, whole-wheat bread, and Our Bodies, Ourselves.  I can’t forget who I am.  It’s time to go back to my (slightly) radical roots.

If I had gone to the caucus, I would have supported Bernie.

There was a record turnout for the Democrats in our precinct:  662.

And Bernie won in our precinct!  Here are the numbers:

In Iowa Bernie and Hillary are virtually tied.

Now they’re gone:  we’ll see them in the fall maybe, but they’ve got other states to woo!

A brief meditation on health care.

I was horrified to learn that one of my medications would cost $1,000 a month without insurance.

I am not very political, but I know about sickness.

Every American deserves health insurance.  The creation of “Obamacare,” or the Affordable Care Act (ACA), is a miracle in our conservative country. What will happen with next year with a new president? Check the records:  Hillary and Bernie have strong records on health care, while the Republicans say they want to revoke Obamacare.

I tend to be too personal, but I will just tell you: multiple medications kept my mother alive, she lived long, and she was not ready to die when she died.  I am still middle-aged, but I, too, need  medications.  What happens to people who slip through the cracks and cannot buy the drugs they need?  Obviously, many die.

In an article in The American Scholar, “Medication Nation,” Philip Alcabes, a professor of Allied Health at the School of Nursing at Adelphi University and Director of the Public Health Program in Adelphi’s Center for Health Innovation, writes about America’s dependence on drugs. He believes drugs are over-prescribed , and cites some interesting statistics.

According to the Kaiser Family Foundation, Americans filled more than four billion prescriptions in 2014. On average, about half of all Americans use at least one prescription medication in any given month. The U.S. Food and Drug Administration reports that more than 300,000 legal nonprescription (over-the-counter, OTC) medications are also available. Eighty percent of us use OTC drugs as the first response to minor ailments.

Although I don’t doubt that many doctors overprescribe drugs, I wonder about the politics of articles like this.  They undermine the fact that many Americans do have serious health problems and desperately need medications.

Not everyone in sparsely-populated Iowa has access to  health care.  There are bleak rural areas with no doctors.   Even in the cities, there have been severe cuts to health care services.  In 2014 in Des Moines,  8,000 pyschiatric patients lost their doctors when Mercy Medical Center closed its psychiatrict hospital for adults and outpatient services.

As a consumer, I am grateful to my health care givers.  Where would we be without them?  But I was on a rocky road for a couple of years. After an excellent doctor retired, one of his/her partners proved incompetent. You may remember my account of a painful pelvic exam.

Even after you switch doctors, there are ripple effects from treatment by  incompetents.  Are you ready for this?  He/she had miscalculated the dosage of my thyroid pills.  In fact, that gave me a new disease:  my HYPOthyroidism turned into HYPERthyroidism.  (It is under control again now.)

I am very, very serious about the importance of health care.  Let me just quote our two tied Democratic candidates.

“My view is simple: health care is a right, not a privilege. We spend far more than any other country on health care, but 29 million Americans remain uninsured and millions more are under-insured. That is unacceptable. The time has come for a Medicare-for-all universal health care system that provides every American with affordable, quality care.”

“I’ve fought for quality, affordable health care my entire career. As president, I’ll defend the Affordable Care Act, build on its successes, and go even further to reduce costs. My plan will crack down on drug companies charging excessive prices, slow the growth of out-of-pocket costs, and provide a new credit to those facing high health expenses.”

2 thoughts on “The Iowa Caucuses & A Reverie on Prescription Medication”