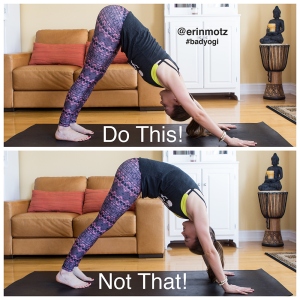 Apparently I did the “Not That!”

In an attempt to improve my rendition of the Downward Dog, which is oft-repeated in a sequence of exercises known as the Sun Salutation, I stretched my arms too far back  from my wrists.  My left wrist aches like a son of a bitch.  Pain in the wrists from the Downward Dog is common, according to yoga web sites. How many Sun Salutations does it take to perfect the Downward Dog (or do I mean change a light bulb)?

I have temporarily suspended yoga and frequently apply bags of frozen vegetables (our ice packs) to my wrist.  But I do miss my yoga!

Here’s What to Read While You Ache:   Humor or a Mystery!

1 Angela Thirkell’s Wild Strawberries.  I love Thirkell’s humorous novels, which are a bit like Barbara Pym crossed with P. G. Wodehouse.    In this whimsical novel, the disorganized Lady Emily Leslie has a house party.  She frequently loses her glasses and bag,  her husband can’t think of a

Spanish name beginning with “R” for  a bull he plans to sell to an Argentine rancher (“I had thought of Rackstraw, or Richmond…. But they don’t sound Spanish enough to me”), a French guest falls in  unrequited love with the Leslies’ beautiful married daughter, Agnes, who barely notices him except when he scoops one of her children out of a shallow pond, and a distant cousin, Mary, falls for their charming dilettante son, David, who has inherited money and whiles away his time in London applying for BBC jobs he doesn’t want, going to plays,  trying to write one, and flirting with women in restaurants, while their oldest son, John, falls for Mary.

I love Thirkell’s hilarious scenes in church.   Mr. Leslie, Lady Emily’s husband, tells her not to dawdle because they are late and “poor old Bannister is dancing in the pulpit.”  Lady Emily, however, insists that the “question of communion is important,” and arranges her family in the pews according to those who want “to escape” (they must sit on the edge of the pew) and those who want to go to communion, who must sit inside “to make less fuss.”

A fun read, and it not necessary to read Thirkell’s Barsetshire series in order, though it doesn’t hurt. This is the second.

I love the cover of this old edition!

2 Jean Kerr’s How I Got to Be Perfect.   Jean Kerr, the author of the Tony Award-winning play, King of Hearts, and the wife of  drama critic Walter Kerr,  was  one of the most amusing domestic columnists of the ’50s, ’60s, and ’70s.   How I Got to Be Perfect (1978) includes the best of three previous collections, Please Don’t Eat the Daisies, The Snake Has All the Lines, and Penny Candy, and a few “new essays.”  In “Marriage:  Unsafe at Any Speed,” she says that “Till death do we part”worked  in the Middle Ages when life expectations were short due to the plague, but she advises a written marriage test in our “enlightened age” of longevity.  I love her questionnaire.  In “As I Was Saying to the Geranium,” she writes about her bad luck with house plants.  In  “The Kerr-Hilton,” she describes their hilarious search for a bigger house after the birth of their fourth son.

For months and months we followed happy, burbling real estate agents through a succession of ruins, which, as the agents modestly conceded, “needed a little paint and paper to make them happy.”   These homes invariably had two small dark living rooms and one large turn-of-the-century kitchen–and I don’t mean the nineteenth century.

Eventually they go see a huge brick castle in “a style that Walter was later to call neo-gingerbread,” with  clock towers, cupolas, and  a courtyard that “strongly resembled an MGM set for Quo Vadis.”  Walter leans on some oak paneling and briefly disappears into a secret closet.  But they buy it because it’s the right size for their family and the layout gives them space from their four sons.

3 Julian Symons’ The Man Who Killed Himself (1967).   I have a Penguin omnibus of three novels by Symons, a crime writer, editor, poet, and literary historian, and this well-written, fast-paced mystery is the first of his I’ve read.  Arthur Littlejohn, the hero–but is he the hero?–is a timid man, bullied by his wife.  No one would think he leads a double life, but he has another identity, as the roguish Major Eastonby Mellon, and a second wife, who believes he is frequently absent because he is spy. When he plans to murder his first wife,  let’s just say it gets noirishly out of hand. 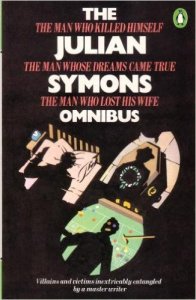 Short posts are the best, but I must cut this short because I ache again!  More ice.