I wanted to get out:  I wanted to ride my bike, but the wind gusts were 9 mph. Yesterday the gusts were 21 mph:  I  zigzagged through tree-lined neighborhoods to find shelter.  Today I dressed lightly, because it was sunny and I was optimistic.  As I rode into a fierce wind, I shivered and sweated.

I took a break at a  coffeehouse and sat on the terrace and opened my copy (actually e-book) of Middlemarch. 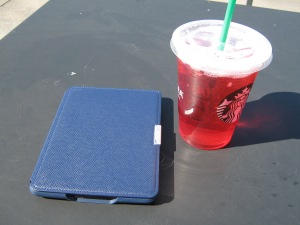 Middlemarch on my unphotogenic e-reader and  iced tea.

What is your favorite Eliot?  It is supposed to be Middlemarch, yes? I love it, but I prefer Daniel Deronda, whose arrogant heroine, Gwendolyn Harleth, makes so many horrendous mistakes:  she even loses a valuable necklace gambling.  Yet Middlemarch is a masterpiece, an absorbing, satiric portrait of characters in a provincial town.  And we channel our inner good girl as we read about Dorothea Brooke, the bright, fiery, naive young heroine who marries a homely middle-aged scholar, Mr. Casaubon, mistaking him for an intellectual. She wants to shine in a brighter light than the society of Middlemarch and imagines herself helping with the research and making a contribution to the world.  Mr. Casaubon, however, is unable to organize his life work, a mass of notes for a “Key to All Mythologies.” During their honeymoon, he cannot even be bothered to accompany her to art museums and churches, but toils at his useless work. His young cousin, Will Ladislaw, an artist-turned-writer whose education has been paid for by Mr. Casaubon, is in Italy, and begins to take Dorothea to galleries.  He says Casaubon’s scholarly has already been done in German, a language Mr. Casaubon does not know. Dorothea is startled. And Mr. Casaubon is jealous of Will, with reason. 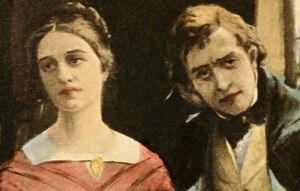 Illustration of Dorothea and Will Ladislaw, published by the Jenson Society in 1910.

E-readers are so wonderful on the road, because Middlemarch is a big book to carry  on a bike.  I was up to Chapter 50:  Mr. Casaubon has finally died, and Dorothea is infuriated by “a strange indelicate proviso” in his will stating that Dorothea will lose his money if she marries Will Ladislaw.   (Will and the will–I like the joke.)  Dorothea is humiliated–certainly she has never thought of a second marriage– but  she also believes Will should have half the money, because his mother was disinherited for marrying out of her class.

Women in Middlemarch are dependent on men.  Dorothea has her own money, but she does not have the education.  It is not Mr. Casaubon’s money that interested her, but his mind. And because of the proviso in the will, she is  exasperated to find he also expected her to continue his work  She no longer feels the obligation.

Every word Eliot writes is so vivid and brilliant, and the images are spectacular.  His useless scholarly work is “a tomb.”

…he willingly imagined her toiling under the fetters of a promise to erect a tomb with his name upon it.  (Not that Mr. Casaubon called the future volumes a tomb; he called them the Key to all Mythologies.)  But the months gained on him and left his plans belated:  he had only had time to ask for that promise by which he sought to keep his cold grasp on Dorothea’s life.

The grasp had slipped away. …now her judgment, instead of being controlled by duteous devotion, was made active by the imbittering discovery that in her past union there had lurked the hidden alienation of secrecy and suspicion.

Every word is perfect!

There are many, many characters in Middlemarch.  I am fascinated by Lydgate, a brilliant doctor with the ambition to do scientific research. His marriage prevents him:   marriage is  a trap in Middlemarch.    I am also very fond of  Mary Garth, the smart, sharp, sometimes  bitterly sarcastic young woman who, unsuited to be a governess, prefers to work as a nurse/companion to Mr. Featherstone, a dying rich man.  Mary’s morality unwittingly spoils her friend Fred Vincy’s chance of inheriting the money: I won’t tell you how.  Characters struggle in Eliot’s fictional provinces with doing the right thing.  The right things are right, but can be costly.  It takes a gambling vicar, Mr. Farebrother, to explain why Mary was right in the long run.  (And that’s why Mary should marry Mr. Farebrother, but you know it’s not going to happen.)

Whom do you love?  Not necessarily the right person in Eliot’s world:  that’s for sure!

Any introduction to Middlemarch can give you the background you need. These are just musings.  Writing about the classics is so difficult:  it is the life work of scholars.  This is not my life work!

14 thoughts on “Are We Dorothea? Reading Middlemarch on a Cold, Windy Day”