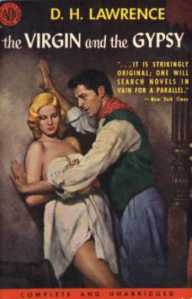 I’ve already done my summer reading:  three silly books that would have been better saved for that horsefly-haunted fishing lodge I will find myself in soon.

But they are no less frothy than most of what will be promoted this summer!

D. H. Lawrence is one of my favorite English writers. I love his poetry, novels, and travel writing.  His style can be intense,  but I appreciate intensity. Why, why, why did I not get on a train to Nottingham, his birthplace, when I was in England?  Well,  he didn’t like Nottingham much. And he wasn’t that keen on England.

Is he still in fashion? I have no idea.  My obsession began when I saw the movie Women in Love, starring Glenda Jackson, who won the Oscar for Best Actress, Oliver Reed, Alan Bates, and Jennie Linden. And then I was enraptured by the novel Women in Love, though I tried to be cool about it, because my best friend thought it was very funny.  It is one of the strangest, loveliest, most seductive books I’ve ever read.  The Rainbow, its prequel, is even more stunning.  I also like  Sons and Lovers, his beautiful coming-of-age novel.

And then there’s The Virgin and the Gipsy.

Mind you, I enjoyed The Virgin and the Gipsy, but Lawrence’s sexual philosophy can seem ridiculous when concentrated in a novella.  He needs a short story or a novel.

It is actually a typical Lawrence story  of forbidden sexual attraction between a middle-class woman and a lower-class man.  Think Lady Chatterley’s Lover, only sillier. It begins almost like a fairy tale.  The rebellious Yvette and her older sister, Lucille, are trapped in the rigid life of a rectory dominated by a grim granny referred to as the Mater.   We learn that their mother, Cynthia, left the rector for a penniless man when the girls were children.  And their Aunt Cissie sizzles furiously about the house hating both girls, but especially Yvette.

So, naturally, the girls like to get out.  One day the wild Yvette is out in a car with Lucille and  some other young people, and they almost run down a gipsy cart.  The cart finally gets over to the side of the road, but the driver is furious.

Yvette’s heart gave a jump. The man on the cart was a gipsy, one of the black, loose-bodied, handsome sort.

He asks if they would like their fortunes told.

She met his dark eyes for a second, their level search, their insolence, their complete indifference to people like Bob and Leo, and something took fire in her breast.  She thought:  “he is stronger than I am!  He doesn’t care!”

Yvette experiences pure sexual attraction.  This is a little overwritten, though.

Yvette has clandestine meetings with the gipsy.  Sometimes he drives his cart past their house and she runs out, other times Yvette resists.  She is also scandalizes her granny by befriending a couple who are living in sin while they wait for the woman’s divorce.

It’s a little silly.   Still, it seemed pure sex when I was an adolescent. 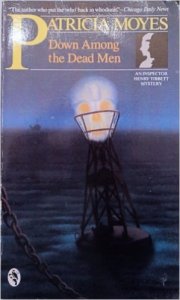 I picked up a couple of mysteries by Patricia Moyes, because they were  very nice paperback editions with crisp pages. I THINK I read about them at a blog.

Well, damn, Down Among the Dead Men is just not that  good.

Chief Inspector Henry Tibbetts and his wife Emmy go on vacation with friends, Rosemary and Alastair, who have a sailboat.  And then they (and we) have to learn everything about sailing.

Alastair looked at him pityingly.  “If the jib didn’t have a port and a starboard sheet, how could you come about?”  Henry said he had no idea, and watched humbly as Alastair picked up another rope from the deck.

If the jib didn’t…?  It’s a lot like Nancy Drew. Everything has to be explained, and over-explained, until you’re ready actually to put your backs into it and heave ho!

Anyhow, they sail with a bunch of friends, including a saucy sexpot of a woman, Ann, whom the other women hate (including me).

And Henry figures out that a friend of theirs who died tragically was actually murdered.

And Ann puts her hands all over him and makes him promise to stop saying he was murdered.

Okay, but not good enough.  Maybe this isn’t Moyes’ best? 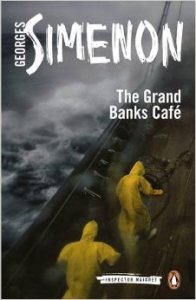 Of course Simenon is excellent, if you like that kind of thing.  The Grand Banks Cafe is a police procedural, straight investigation with no real rounded characters, and lots of re-creation of the crime going on in Maigret’s mind.

Maigret, a French detective, and his wife go on vacation in a fishing port so he can help clear the name of a teacher friend’s student, Pierre, who was the wireless operator of a ship whose voyage was apparently doomed.  (Lots of accidents.)  Pierre is  accused of murdering the captain after they came ashore.  The investigation gets stranger and more bizarre as Maigret discovers that a femme fatale was involved with three of the men on the ship.

Very tight, short, and fast.  One of the better Simenons.

And if you want it, it’s yours.  I’m giving away the Simenon.  Leave a comment if you’d like the book.

11 thoughts on “What Could Be More Predictable Than Too Frothy Summer Reading? The Virgin & the Gipsy, A Too-Cozy Cozy Mystery, and a Very Simenon-y Simenon”