After I was hospitalized for an infectious disease cured by trial and error by a smart team of doctors, I was very weak.  I could barely walk from my apartment house to the corner. Kind friends brought casseroles and books. They also gave me a  lot of cozy mysteries.

My friend Ann introduced me to Lilian Jackson Braun’s  charming series, The Cat Who books. The hero, Jim Quilleran, a prize-winning reporter who has left the big city to live in Moose County, solves crimes with the help of his two Siamese cats, Koko and Yum Yum.  Well, the cats don’t help much, but the books are very funny.  Braun wrote 29 novels and three collections of stories between 1966 and 2007. 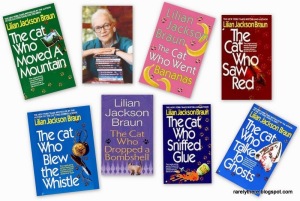 My fondness for cozies has continued since my illness. Sure, I love Golden Age detective fiction, but since 2000 I have also read a slew of trendy new series by women about amateur sleuths who own their own business.  Who knew that female owners of bookshops, tea shops, coffee shops, knitting shops, bakeries, herb shops, and inns investigated so many murders?    Some  are better written than others–I enjoy Lorna Barrett’s Booktown series, Laura Childs’ Tea Shop series,  and Susan Wittig Albert’s China Bayles series–but I love the details about their shops as much as I do the mysteries.  You don’t read these for the style.

I should warn you:  these are very, very, very light.  Perfect to read in a heat wave.

I have recently read a couple of titles in Lorna Barrett’s Booktown series.  The heroine, Tricia Myles. owns a mystery bookshop in a small tourist town in New Hampshire.  Her sister, Angelica, a chef, is also in the book business: she owns a cookbook store and a small restaurant, Booked for Lunch.

Lo and behold! Trish finds a lot of dead bodies. And she can solve a crime faster than the police chief (whom she has dated somewhere in the series:  I am not reading them in order).  And you’ve got to love her employees, Pixie, a former prostitute, and Mr. Everett, a retired 77-year-old man whose wife runs a charitable trust.

I started the series in medias res with Book Clubbed.   In the opening paragraph, Barrett introduces the heroine and manages to capture the mood of a slow winter in New Hampshire.

For once the winter weather seemed to be cooperating, meaning that unless any unforeseen complication arose, Tricia Myles, owner of the mystery bookstore Haven’t Got a Clue, would get a lot more accomplished on that particular Saturday in February.  No ice, or snow, and though the sun had not yet made an appearance in Booktown, otherwise known as Stoneham, New Hampshire, the skies were due to clear before lunchtime–hopefully bringing plenty of book-buying customers with it.

Tricia and Angelica have an appointment to look at a private book collection, but Angelica, also president of the Chamber of Commerce,  is late:  she is busy arguing with the cranky secretary, Betsy, who is complaining about having to use the public restroom.  Betsy storms out to take out the trash, and a few minutes later they hear a commotion upstairs.   They find Betsy strangled and crushed by a bookcase.

Nobody liked Betsy, who lived by Robert’s Rules of Order.  And it turns out she was a hoarder and embezzler who also kept incriminating dossiers on everybody in the Chamber of Commerce. Turns out Betsy is a millionaire.  Where did the money come from, and who killed her?

There are also cats on the covers of these books. That’s why my husband thinks I read them.   Tricia’s cat is called Miss Marple.

Lorna Barrett is not Simenon.  I hope I’ve made that clear!