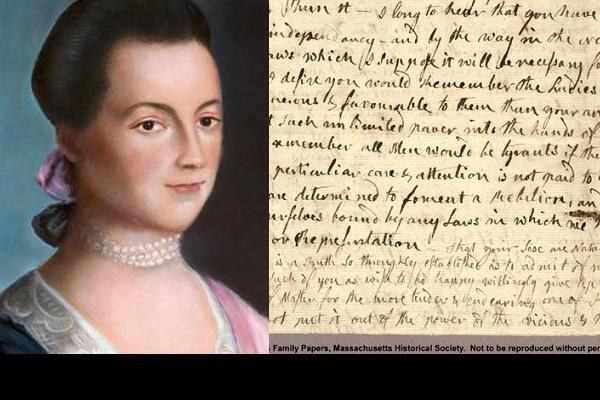 A portrait of Abigail Adams & a letter.

The Fourth of July is a wonderful holiday if you like fireworks, but it’s also a redneck holiday.  You know–guys in wifebeaters arrive with a case of  beer at dawn at the park to reserve the best place for viewing the fireworks.  For us it’s about grilling burgers, worrying about the salmonella factor of deviled eggs and potato salad,  swigging Arnold Palmers, eating cupcakes with red, white, and blue sprinkles, and twirling a few sparklers.

Why do we like it?  Well,  it is the sine qua non of  the Declaration of Independence and subsequent classics by Hawthorne,  Thoreau, Emerson, Harriet Beecher Stowe, Theodore Dreiser, Upton Sinclair, Martha Gellhorn, Hemingway, Kay Boyle, Dawn Powell, Grace Paley, Ann Beattie, Philip Roth, and on and on and on…

Usually I prefer history books about the Romans or the Tudors, but I plan to read at least a few pages about the American Revolutionary War before the 4th. Here is  my list of

BOOKS TO READ ON INDEPENDENCE DAY! 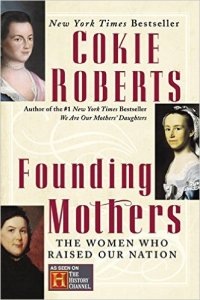 1. Cokie Roberts’s Founding Mothers:  The Women Who Raised Our Nation. I’ve always admired Roberts’ journalism on NPR, and this might be the book to kick off my interest in American women’s history. Goodreads says it’s the story of “women who fought the Revolution as valiantly as the men….. Drawing upon personal correspondence, private journals, and even favoured recipes, Roberts reveals the often surprising stories of these fascinating women, bringing to life the everyday trials and extraordinary triumphs of individuals like Abigail Adams, Mercy Otis Warren, Deborah Read Franklin, Eliza Pinckney, Catherine Littlefield Green, Esther DeBerdt Reed and Martha Washington–proving that without our exemplary women, the new country might have never survived.” 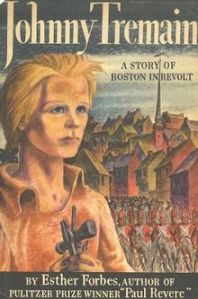 2. Esther Forbes’s Johnny Tremain, winner of the Newbery Award in 1944. This stunning historical novel, usually shelved in the children’s or Y.A. section, is really for all ages.  It is the story  of Johnny Tremain, young silversmith’s apprentice, who, after a crippling accident, can no longer work with silver.   He finds a job delivering a Whig newspaper, and gradually gets to know John Hancock and John and Samuel Adams.  Lots of history:  the Boston Tea Party, spying for the Sons of Liberty, and Paul Revere’s ride.  My husband and I love this book! 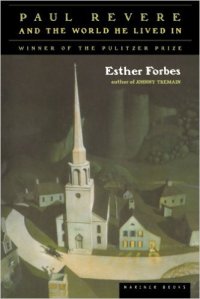 3.  Esther Forbes’s Paul Revere and the World He Lived in.   I’ve never actually seen this biography, but Forbes won the Pulitzer Prize for it in 1942.  If I ever find it… 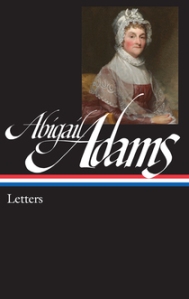 5 The American Revolution: Writings from the War of Independence 1775–1783 (Library of America).  The LOA description says:  “Drawn from letters, diaries, newspaper articles, public declarations, contemporary narratives, and private memoranda, The American Revolution brings together over 120 pieces by more than 70 participants and eyewitnesses to create a unique literary panorama of the War of Independence”.  And, by the way, it is on sale for $2.95 at the LOA website. 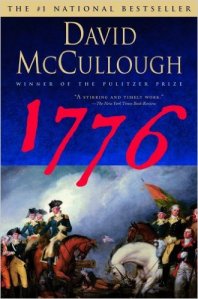 6 1776 by David McCullough, a historian who has won two Pulitzer Prizes, the Presidential Medal of Freedom, and the National Book Foundation Medal for Distinguished Contribution to American Letters. According to Goodreads, it is “the intensely human story of those who marched with General George Washington in the year of the Declaration of Independence – when the whole American cause was riding on their success, without which all hope for independence would have been dashed and the noble ideals of the Declaration would have amounted to little more than words on paper.” 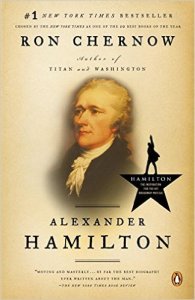 7  Alexander Hamilton by Ron Chernow.  This biography was the inspiration for the musical “Hamilton.” According to Goodreads: “Few figures in American history have been more hotly debated or more grossly misunderstood than Alexander Hamilton. Chernow’s biography gives Hamilton his due and sets the record straight, deftly illustrating that the political and economic greatness of today’s America is the result of Hamilton’s countless sacrifices to champion ideas that were often wildly disputed during his time. ‘To repudiate his legacy,’ Chernow writes,’ is, in many ways, to repudiate the modern world.’  (If only the cover were less boring…) 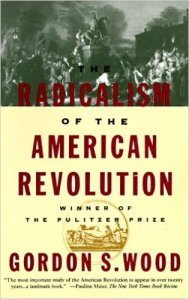 8 The Radicalism of the American Revolution by Gordon S. Wood. Goodreads says this Pulitzer Prize-winning book is “a grand and immemsely readable synthesis of historical, political, cultural, and economic analysis, a prize-winning historian depicts much more than a break with England. He gives readers a revolution that transformed an almost feudal society into a democratic one, whose emerging realities sometimes baffled and disappointed its founding fathers.” 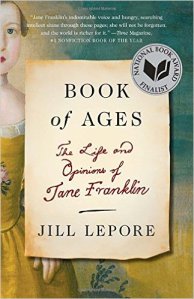 9 Book of Ages: The Life and Opinions of Jane Franklin by Jill Lepore.  Goodreads says,   “From one of our most accomplished and widely admired historians-a revelatory portrait of Benjamin Franklin’s youngest sister, whose obscurity and poverty were matched only by her brother’s fame and wealth but who, like him, was a passionate reader, a gifted writer, and an astonishingly shrewd political commentator.” 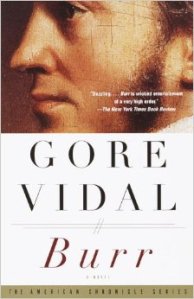 10 Gore Vidal’s Burr.  You can’t go wrong with Gore Vidal, a masterly writer of historical fiction.  Goodreads says, “Burr is a portrait of perhaps the most complex and misunderstood of the Founding Fathers. In 1804, while serving as vice president, Aaron Burr fought a duel with his political nemesis, Alexander Hamilton, and killed him. In 1807, he was arrested, tried, and acquitted of treason. In 1833, Burr is newly married, an aging statesman considered a monster by many. Burr retains much of his political influence if not the respect of all. And he is determined to tell his own story. As his amanuensis, he chooses Charles Schermerhorn Schuyler, a young New York City journalist, and together they explore both Burr’s past and the continuing political intrigues of the still young United States.”

Enjoy!  And let me know your own favorite Independence Day books.