I read several blogs yesterday and added ten books to my TBR pile.  That cannot be good!

1 Thomas at Hogglestock.com has posted pictures of his  beautiful Limited Editions Club copy of Sinclair Lewis’s Main Street, with illustrations by Grant Wood. It is signed by Wood.  I’m gobsmacked!

And Thomas is a fellow Lewis fan.  He writes,

Nine years before Virginia Woolf published A Room of One’s Own, Lewis’s heroine Carol Kennicott asked for a room of her own in Main Street. Even though Main Street is seen a classic take down of small town America, I think it should be read as well as an early feminist classic.

If you haven’t read the Nobel Prize-winning Lewis, you’re in for a treat.  I often think of him as the American John Galsworthy, another Nobel Prize winner whose popular books are now relegated to the musty middlebrow arena.

I first read Main Street in an Images of Women in American Fiction class at a midwestern university.   I  identified with Carol Kennicott, a versatile young woman who  at “Blodgett College” (Lewis, a Minnesota native who got away, can’t help but mock Midwestern culture ) flirts with art, music, drama, and even playing basketball and wonders what her special talent will be.  She knows she will have to earn her living.  But how?  Almost all of us in the class were wondering the same thing.

But how she was to earn it, how she was to conquer the world—almost entirely for the world’s own good—she did not see. Most of the girls who were not betrothed meant to be teachers. Of these there were two sorts: careless young women who admitted that they intended to leave the “beastly classroom and grubby children” the minute they had a chance to marry; and studious, sometimes bulbous-browed and pop-eyed maidens who at class prayer-meetings requested God to “guide their feet along the paths of greatest usefulness.” Neither sort tempted Carol. The former seemed insincere (a favorite word of hers at this era). The earnest virgins were, she fancied, as likely to do harm as to do good by their faith in the value of parsing Caesar.

Carol goes to library school in Chicago and works in a public library in St. Paul, but her patrons don’t need her recommendations.  So she  falls in love  and marries the robust Dr. Will Kennicott, and moves to his small conservative hometown, Gopher Prairie. Her fantasies of importing culture to Gopher Prairie are sweet but absurd and Lewis gently satirizes her, but at the same time traces her growth and maturity.  She is one of my favorite American heroines.

And is Gopher Prairie as bad as it seems?  Yes and no. 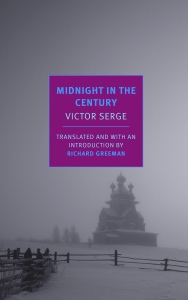 2 Karen at Kaggsysbookishramblings has almost convinced me to read the Soviet writer Victor Serge. (I have a roll of “Dostoevsky pills” handy –Necco wafers!– in case it proves too depressing.)    Midnight in the Century sounds fascinating, if grim.

Victor Serge is fast becoming an author I turn to when I want a book that I know will be enthralling and beautifully written. After discovering him via his “Conquered City” in 2014, I was recently bowled over by “The Case of Comrade Tulayev”. And after spending some time in the rarefied world of (fictional) history (I’m reviewing a little out of order here), I felt that I needed to read something that dealt with the human side of the past and how it affected people on a smaller scale – so Serge seemed the ideal choice.

3 Melissa at The Bookbinder’s Daughter reviewed Elizabeth Jane Howard’s Getting It Right, which has been reissued by Open Road Media. And, guess what, I found my old paperbook copy with the tanned pages.  Those tanned pages are the reason for e-books! I love Howard’s witty women’s fiction and must reread something by her soon..

Meanwhile, Melissa begins her review of Getting It Right:

Gavin Lamb is a thirty-one year old virgin who still lives at home with his parents.  It’s not that he can’t afford to move out because he has a very lucrative career as a hairdresser in London.  But he doesn’t like change and moving out of his childhood home would be more change than he could possibly handle.  His doting and old-fashioned mother would also have a very hard time letting go of her son.

4 Ellen Moody has written a stunning poem, “Washed Away by Sorrow.” You can read it at Under the Sign of Sylvia.

Here is the first stanza.

Sorrow is not the same as sadness:
For me it’s been a great dissolver
It has washed away many emotions
that used to actuate me
however obscurely, however blindly
however misunderstood.

8 thoughts on “What Bloggers Are Reading: Main Street, Midnight in the Century, Getting It Right, & a Poem by Ellen Moody”