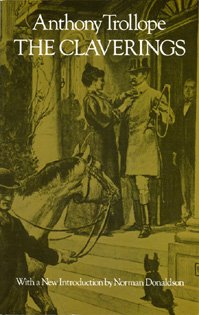 What do you read when you’ve read Trollope’s Barsetshire series too many times?  Well, try The Claverings.  It is not his best book, but I loved it.   I disappeared inside the pages for hours and thought about the characters when I was walking or bicycling. I wanted to know who would marry Harry.  God knows he didn’t know!

The hero, Harry Clavering, the son of the rector of Clavering, has almost too many choices:  he is handsome, brilliant, and a Fellow at Cambridge, but he doesn’t want to take Holy Orders.  He apprentices himself to a surveyor/engineer, but when he gets a job in London he doesn’t apply himself.

And what about love?  At the beginning of the novel, he is  jilted by Julia Brabazon, the most beautiful, witty, and only slightly wicked character in the novel: she is his cousin Lord Hugh Clavering’s sister-in-law.  Why does Julia dump Harry?  She says outright she is marrying Lord Onger for money.  Harry soon consoles himself and  gets engaged to kind, sweet, smart Florence Burton.   Meanwhile, Julia has suffered like a character in Dante’s Inferno.  She has been degraded by association with the dissolute, drunken Lord Unger, and  gossip has linked her name with one of his friends.  When Lord Unger dies and Julia returns to London, Lord Hugh will not receive her. 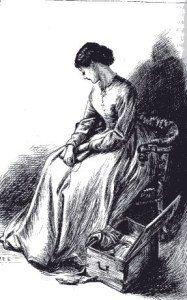 Florence grieving and preparing a packet of letters to return to Harry.

But then Harry meets her again, and he is attracted. He doesn’t tell Julia he is engaged.  He flirts and then gets physical.  After she hears of his engagement,  Harry assures Julia that he wants to marry her.  What is Julia to think?

So what is Florence do about his treachery?  She still loves him. Is she engaged to him, or is Julia?  Florence’s  sister-in-law visits Julia, who says that  Harry must decide the question of marriage.

Florence grieves, weeps, is depressed, but also is furious.  She asks her sister-in-law:

“Does she say that she loves him?”

And he;–what does she say of him?”

“She says what you also must say, Florence;–though it is hard that it should be so. It must be as he shall decide.”

You go, girl!  Well, it isn’t as simple as that, because she still loves him.  I won’t tell you WHO decides whom Harry should marry, but it is surprising that Harry is so indecisive. If only he could have listened to Hank Williams’ “Your Cheatin’ Heart.” That would have turned him around.  As it is…

But I can’t give it away!

Loved the book!  Not great, but I loved it.