The other night I listened to a brilliant BBC Radio Four adaptation of Doris Lessing’s The Golden Notebook, dramatized by Sarah Daniels.  If you loved the book, or if you have meant to read Lessing but never gotten around to it, this two-part radio play will inspire or revive your interest.  There is a vividness to listening instead of looking at a stage, though the voices of the heroine Anna (Susanna Harker), a blocked writer, and her friend Molly (Fenella Woolgar), an actress, are not as I imagined. Why?  Apparently I read Lessing’s books with an American accent!  Who knew?  But Harker and Woolgar bring exactly the right mix of trust and impatience to this long-standing friendship:  they are truthful (to a point) and intense, witty and observant, sophisticated and yet raw.  Much of the dialogue comes right out of Lessing’s book.

In 2012, on the 50th anniversary of the publication of Lessing’s 1962 classic, I posted the following at my old blog about The Golden Notebook. This is a rerun.

Lessing, the Nobel Prize-winning writer whose brilliant novels rely as much on her interpretation of history as on the delineation of the lives of modern women, has always denied it is a feminist novel. But for many feminists, its publication dwarfed other historical events of 1962: it had more impact on me than did the Cuban Missile Crisis, the Rolling Stones’ debut, and The United Nations General Assembly’s resolution condemning South Africa’s racist apartheid. 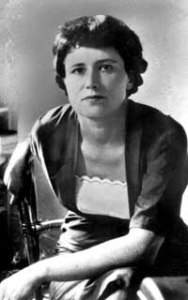 Her powerful novel centers on Anna, a writer and single mother whose life is fragmented because she somehow cannot write the truth. She has contempt for her best-selling novel about an interracial relationship in Africa, is disillusioned by the reports of communist torture and anti-Zionism in the Soviet Union, and seemingly falls in love only with men who cannot love deeply. But this painful, honest novel suggested alternative futures for women who had decided that society was breaking down, that marriage wasn’t viable, and that they needed to experiment. Lessing chronicles a collapsed society, broken by the trauma of war, fear of the bomb, and emotional frigidity.

So has The Golden Notebook stood the test of time?

It was my favorite novel when I was 15. For some reason, though I was a virgin and my giggling friends and I hung glittered tampons from trees in the yards of boys we liked, I identified with Anna. (A very immature Anna, I might add.)  When I reread it in my 30s I understood Anna’s difficulties with writing (I had sold out as a “pop-culture” freelance writer, and enjoyed writing trivial nonsense), her encounters with men (when you’re divorced in your 30s, you’re lucky if you ever meet a normal unmarried man again), and her radical politics.

The experimental structure of the novel is bold. Lessing alternates sections of a short traditional novel about Anna, “Free Women,” with Anna’s writings in four notebooks–black, red, yellow, and blue–in which she tries to measure out the truth about her life of organized chaos, often writing in fragments, experimenting with different styles, chronicling her experience straightforwardly in the communist party in Africa, her marriage and love affairs, her difficulty with writing. She also writes a novel about an alter ego, Ella, who is more brittle than Anna, but undergoes similar emotional upheaval.

But it isn’t only the terror everywhere, and the fear of being conscious of it, that freezes people. It’s more than that. People know they are in a society dead or dying. They are refusing emotion because at the end of every emotion are property, money, power they work and despise their work, and so freeze themselves. They love but know that it’s a half-love or a twisted love, and so they freeze themselves.

I recognize that emotional freezing.

In some ways, this was a novel for its time. Anna’s quest for sexual freedom is commonplace in the 21st century, although it often occurs without intelligence or self-respect: just a “hook-up.” Freudian analysis–Anna has been in analysis with a psychiatrist she calls Mother Sugar, who keeps trying to get her to write–has been replaced by pharmaceutical remedies (at least in the U.S.). Anna’s portrait of her misogynistic gay lodger, Ivor, seems believable in the context of the book–he and his lover mock her, refer to her as a cow, use her makeup, and so she has to throw them out–but many would feel more comfortable if Ivor were rewritten as Paul Rudd’s character in that movie with Jennifer Anniston.  Which is true to the times?

Lessing’s Children of Violence series, about the heroine Martha Quest, treats similar material. The first three novels, Martha Quest, A Proper Marriage, and A Ripple from the Storm are traditional in form, the fourth, Landlocked, is slightly experimental, and the fifth, The Four-Gated City, is so over-the-top that it makes The Golden Notebook look straightforward; parts of The Four-Gated City are science fiction. Martha is altogether a harder character than Anna–she leaves one unloved husband and daughter, then marries another man she doesn’t love just because they’re in the communist party together, works hard as a communist until the reports of concentrations camps come in, divorces her second husband, and then escapes to England…where I must say unexpected things happen.

Some of you will prefer The Golden Notebook. Political attitudes have changed in the last 50 years, and you have to respect those attitudes of the ’50s and learn from them while you inhabit the book.  Many of Anna’s experiences still ring true.

I can’t wait to reread the book.