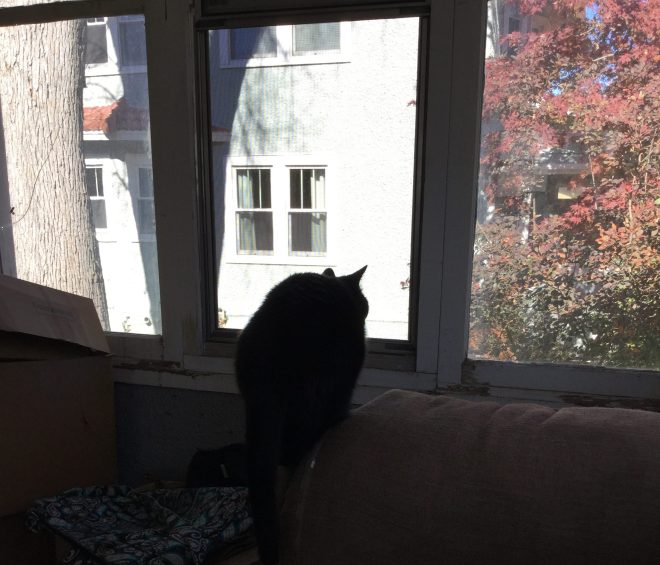 Hanging out on the porch in November.

It’s never fun to have strangers ripping up your walls, and when our tiny house was disrupted during a recent black mold scare, I  stayed home with the cats. We could have gone to a hotel, but the cats prefer their own environment, to the point that I rarely travel and once stayed home with them during a bomb scare.  I did not believe our neighborhood would blow up, nor did it.

The cats are fine after the black mold removal, but I am exhausted.  And so I went on a binge:  a Virago-and-Diet-Coke binge.

My addiction to Viragos started in the 1980s when an eccentric bookshop owner may or may not have been illegally selling British editions of books. My two favorite Virago writers are  among the first I read: Barbara Comyns and  Dorothy Baker.

The American writer Dorothy Baker‘s masterpiece Cassandra at the Wedding (which I wrote at length about here)  has been reissued both by Virago and NYRB.  In  this remarkable novel about twins, sexuality, and depression, the narrator, Cassandra, a suicidal graduate student, drives from Berkeley to the family ranch for her twin sister Judith’s wedding.   Judith, a musician, plans to marry Jack, a medical student.  Only Cassandra, their father, and grandmother, and a few of their grandmother’s friends will attend the private ceremony. Cassandra has been fragile since their mother, a writer, died of cancer. She tries to talk Judith out of getting married:  she says Jack is redundant and the sisters belong together. After Judith disagrees, disaster ensues.

I wish I could say all of Baker’s books were equally wonderful, but they are not, and perhaps that’s why Virago only reissued this one.   Trio is a pulp menage a trois novel, in which a lesbian relationship is threatened by a young man’s attentions to the younger woman: it is slightly reminiscent of D. H. Lawrence’s The Fox.    Young Man with a Horn, reissued by NYRB,  based on the life of jazz musician Bix Beiderbecke, lacks the star quality of Cassandra.  I tracked down a copy of Our Gifted Son, and have attempted to read it twice.  Oh, dear, all I can say is that it’s set in Mexico.  I WANT to love her  books, but why did she write so little?  Why was only one truly great?  What on earth happened to her?

Barbara Comyns, on the other hand, is a reliable writer.  She didn’t write one great book, but several. Her narrators are charming and original, people you’d want for your  friends, but their lives are not always happy:   they deal with abusive fathers, unfulfilling affairs and marriages, and poverty.  Sometimes there are happy endings, sometimes not.

Our Spoons Came from Woolworth’s is one of my favorite novels.  I put it in the same class as Dodie Smith’s I Capture the Castle and Lynne Reid Banks’ The L-Shaped Room.  The captivating, gentle narrator, Sophia, tells us the tragicomic story of her first marriage to a self-centered but charming artist, Charles Fairclough, whose selfishness plunges them into poverty and makes her ill.  He won’t work, they are very poor, and the description of poverty is detailed:  we feel the cold.

But they are very happy when they are engaged.   You have to read her comic prose to know how charming this is.

Charles and I were both twenty when we met, and as soon as we were twenty-one we decided to get married secretly.  There was a church next door to the house where I had a bed-sitting-room, so we went there to ask the priest to put the banns up.  We dared not ring the bell at first, we felt too shy.  Charles said they would ask us in and give us a glass of sherry and some funeral biscuits.  We stood on the doorstep rehearsing what to say and the priest must have heard us, because he suddenly opened the door though we hadn’t rung the bell.  He took one look at us with his deepset eyes and said “Banns” in a shouting kind of voice.

Then she gets pregnant, and their little boy Sandro gets some kind of milk allowance from the clinic, but Sophia and Charles don’t always eat.  When she goes back to work full-time at an artists’ studio, she has to leave Sandro with some very mean-spirited relatives of Charles. Then they have a daughter, and  Charles tells her he doesn’t want a family and they must leave.  The consequences are tragic.

And yet Sophia’s gentle, observant tone gives the narrative almost a fairy-tale atmosphere.  We cry for Sophia but she doesn’t cry for herself.  She courageously makes a new life for herself.  There is a slow transformation, after she goes off on her own.  She has to keep going.  She is that kind of person.  And she has second and third chances.

There is a happy ending.

And that is a relief after the black mold week I’ve had.