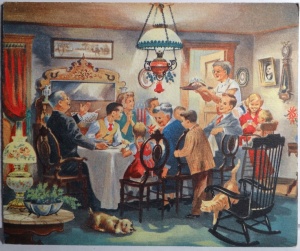 I have been musing about favorites.

Speaking of favorites, I recently metamorphosed into my favorite aunt.

I was not her favorite niece. That is not how things work.   Her favorite was Sandra, my maverick cousin, a talented violinist who dropped out of college, lived in a van for a year during a cross-country trip, got an associate’s degree in graphic design, worked for a marketing firm, and later went back to college.

“I thought you would be her favorite,” said my mother.

When my aunt retired, she moved to the small town where my father lived.  It is an extremely ugly town, but he was her favorite brother. She joined a church, became active in the community, and told me not to gossip at the cafe  because it would be all over the town within minutes. Once when I was staying at her house, I got an empathetic call from a stranger about something I had mentioned in public.

My aunt was authoritative.  Everybody shaped up.  My father no longer made inappropriate sexist remarks at the table.  I cannot say what he said elsewhere.

And she got us all together for the holidays.

“How will you feel if you haven’t seen your father before he dies?” she asked.  (N.B.  He was perfectly well.)

I thought about it.  I realized it was my duty.  It didn’t go very well, but I visited once a year.

My father didn’t appreciate her interventions or even notice my presence on those rare visits.

“She pays people to do everything for her,” he said resentfully.  Bossy women:  they just don’t appeal, do they?

And it was true:  she had a gardener and a cleaning lady.  She had holiday dinners  catered.  She either ordered  from Harry and David or went in for catering from the Hy-Vee.

And how lovely those dinners were!  The conversation was scintillating, considering . We learned who was protesting against the war, who was struggling to succeed as a nurse practitioner, and who was getting married or divorced.  As for me, I  mentioned reading Anna Kavan:   it upset her when I said  Kavan was a heroin addict, so I learned I had a ways to go in the fine art of conversation.

After my aunt died, the family scattered.  As I said, I am not the favorite (not outside my immediate family), and I have not been able to be a good holiday hostess.  Nor has anyone else.

For instance this year I ruined the turkey.

I turned up the temp too high.  I usually cook it at 325 degrees for a very, very long time.  This year I had it at 350.  It was the first time I’ve ever ruined the turkey.

My husband went out and bought smoked turkey and the fixin’s at the Hy-Vee.  We sat in front of the TV and ate excellent, reasonably healthy food.  AND I DIDN’T PREPARE ANY OF IT.

Thinking about my aunt, I ponder the Subject of Duty.   I am not Electra.  My father was unkind to my mother and me.

I am my mother’s daughter.

It’s not just my aunt.  It’s the bloody Latin.  No, I don’t separate it from my own life.  I taught Virgil and pietas (duty to the gods, country, and family) for so many years.

What is my duty? Not to leave the students during a bloody earthquake?

If my aunt was right, it goes beyond work.

I’m still figuring it out.  But at least I know I can have my holiday dinners catered.

14 thoughts on “How I Became My Aunt”