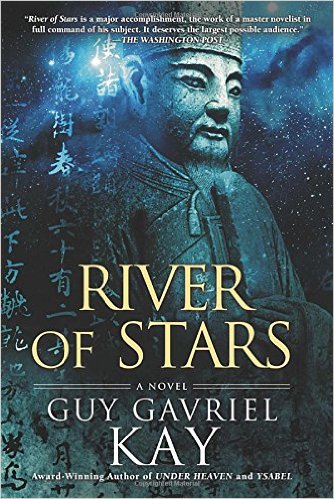 You don’t have to be an SF/fantasy fan to enjoy Guy Gavriel Kay’s beautifully-written River of Stars, an engrossing novel of  war, politics, poetry, and love, set in a fictional  country inspired by China in the Northern Song Dynasty.

I began to read Kay’s gorgeous fantasy novels after I read Washington Post critic Michael Dirda’s review of Under Heaven, the first book in this  series.  Dirda wrote,

Guy Gavriel Kay’s “Under Heaven” isn’t quite historical fiction, nor is it quite fantasy. It’s set in a slightly reimagined Tang dynasty China, sometimes seems reminiscent of films like “Crouching Tiger, Hidden Dragon” and depicts the unimaginable consequences of a single generous gift. Most important of all, it is the novel you’ll want for your summer vacation.

The second novel, River of Stars, set four centuries later,  is equally intriguing but heartbreakingly sad. I only hope there will be a sequel. My only real criticism?   Like George R. R. Martin’s  Game of Thrones, Kay’s novel has a huge cast of characters and  switches constantly from one character’s narrative to another. I found this annoying, because just as I’m getting used to one character he shifts.  But  obviously fans of Martin don’t mind this kind of thing, and  reviewers of River of Stars were very enthusiastic.

Anyway, here  is a quote from Laura Miller’s review at Salon:

Kay’s exquisite Asian-inspired epic fantasy offers a fresh twist on intrigue and adventure…  Here you’ll find all the scheming and skulduggery that give Game of Thrones its zest, refined to the subltlest of arts.

Leave a comment if you want the  book!  Anyone in the U.S. or Canada is eligible, but, alas, I can’t afford the postage elsewhere.  (Nor can you!)