Balzac, a strange-looking gent, no?

Bloggers have so many projects. There are the reviews (in my case, the “bookish” posts), the group reads, the photos of bookshelves, the Year of This and the Month of That. Bloggers frequently complain of exhaustion, and no wonder. We’re essentially writing our own book newsletters, and some of us write too much. I wrote one post a day in 2013: it really cut into my reading time.

I seldom participate in group reads, because I’m too old, too well-educated, and too well-read. Yup, and since I only have a decade or two left, I direct my own reading . But I very much enjoyed the posts on the year-long group reading of Dorothy Richardson, and even participated in Virago Month, Women in Translation Month, and the 1947 Club (I’m dyslexic with numbers and hope I got the year right. ) These group readings are the equivalent of Yahoo book groups, only more loosely organized.

This has been a bad year politically–I am not happy about the prospect of living in the United States of Exxon next year. So I am about to become a project blogger,

I need distractions.  And so I have made a list of projects for 2017 A very long list.  I’ll only do a few of them.  But here are a couple of my ideas.

Project # 1:  The Year of Reading Balzac 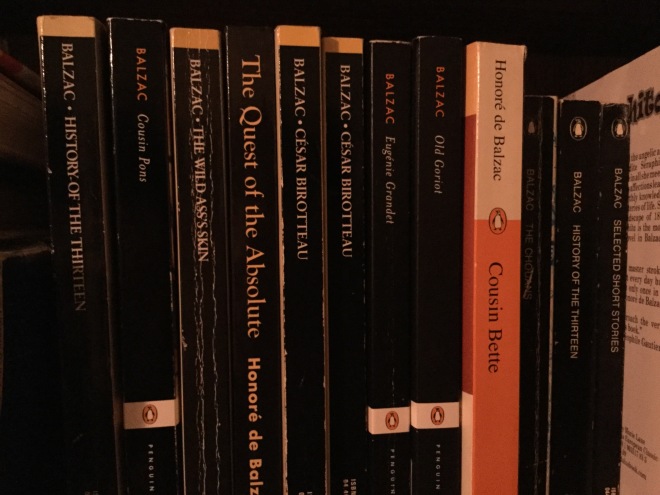 Some of my Balzac books:  2 copies of Cesar B.

More Balzac:  a second copy of History of Thirteen.Balzac was prolific.  He wrote all night, neglected his need for food and drink to churn out journalism and reviews as well as fiction, and died young.

Balzac was prolific.  He wrote all night, lived on coffee, and churned out journalism and reviews as well as fiction.  He neglected his health.  But he had a project.

The Human Comedy consisted of 94 novels and stories.  I will try to read all 95,  but plan to focus on my paperback collection.

On the second shelf we have Seraphita, Lost Illusions, A Harlot High and Low, Droll Stories, A Murky Business, a Colonel Chabert, The Black Sheep, and At the Sign of the Cat and Racket.  Of these I have read four.

I also have a few 19th-century editions of Balzac in a box.  My husband has no idea that I am cutting brittle nasty acidic pages in old books and getting paper cuts. I can’t do much of that because I seem to be allergic!  Oh dear I love books but I may have to go the e-book route.

It can’t be done.  I can’t promote free books anymore.  I hardly ever do it, but it’s a burden.  There’s just so much I want to read.  I’m finishing Alice HOffman’s Fidelity, which is a throwback to her earlier novels about dreamy rebellious women who live emotionally behind layers of fairy tale scrims.   The problem is I would have enjoyed it more had I bought the book and read it at leisure.  As it is I read it on my e-reader in line at Target. Not the best place to appreciate her delicate writing.

Any projects pending for you?

A new year, a new start!