I dropped out after the first year of college.  I didn’t know what the hell I was doing or wanted to do. I was majoring in “boyfriend,” with a minor in cutting classes. Although I tolerated my literature classes, I preferred reading Virginia Woolf –she was not on any syllabus then–to skimming the Psychology textbook, which focused on rats, not psychoanalysis or the The Minnesota Multiphasic Personality Inventory (MMPI) .  While reading Woolf’s A Writer’s Diary, I imagined myself one day living in Bloomsbury and mysteriously learning to write as beautifully as Woolf. It would indeed have been mysterious, as I wrote very little and preferred reading.

Anyway, the “gap year,” i.e., dropout year, was wonderful. I had an undemanding job, with a good salary and benefits.  I completed my work in two hours and spent the rest of the day discreetly reading.  No one minded, so long as I didn’t flaunt it.

The year was remarkable,  because I had time to read what I wanted, and knew other people who had time to read. I hung out with college graduates who couldn’t find an appropriate professional job because they chose to stay in a  university town. And for some reason, maybe because it was a university town and the bookstores carried so many classics, we did not read many new books. Well, we did read some by Writers’ Workshop grads and professors: Gail Godwin, Kurt Vonnegut, John Cheever, and Marvin Bell are a few I remember.  But in general we were reading the dead.

It was not a wasted year: it prepared me to appreciate a university education.

I joined The Literary Guild Book Club, at the pressing of a friend. The books were not as nice as the editions printed by the publishers, but I enjoyed the company of this smart bibliophile, and she and I became addicted to the book club’s cheap hardcover sets of the classics.

The sets were not particularly nice, but they were adequate.  I wryly refer to this period as my “personal prep school.”  When I taught at a prep school a few years later,  I observed that the students received the equivalent of an  undergraduate education at an age when few were mature enough to understand it .   But it gave them the advantage as an undergrad, because it was their second time through the material.   And thus the well-educated rich have an advantage over the public-school-educated middle class and poor.

I returned to the university after my “gap”/dropout year more confident than when I had left.   Like Susanna Kaysen in Girl, Interrupted, I intended to build a life on literature and boyfriends.  I earned a degree in School of Letters, which required proficiency in two foreign languages and a slew of classes in English and literature in translation.  Essentially I did classics and English.

Tonight I surfed the internet and lo and behold!  found  images of some the Literary Guild sets I used to own.  They’re for sale at eBay and other sites for ridiculous prices.  But what a good reading list!  I loved my sets.

I plan to return to some of these books later this year.

HERE ARE SOME OF THE LITERARY GUILD SETS THAT SHAPED MY GAP YEAR READING.

1 The Henry James set:  The Portrait of a Lady The Golden Bowl, and The Spoils of Poynton.  I fell in love with James and have never understood why he is considered difficult.

3.  The F. Scott Fitzgerald set.:   The Last Tycoon, The Great Gatsby, This Side of Pardise, Tender Is the Night.  I’ve gone back to Gatsby many times, and even read the original manuscript, Trimalchio.

5. The Galsworthy set:  The Forsyte Saga, A Modern Comedy, and End of the Chapter.   I watched the TV series and naturally had to read the books. 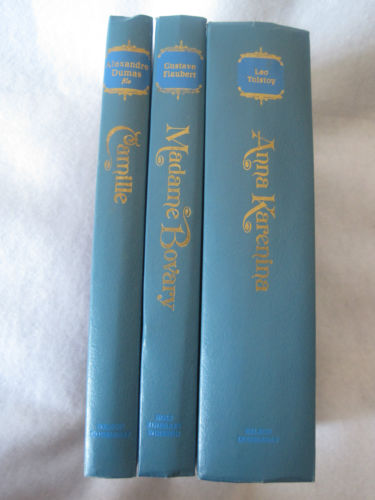 6.  What I call The Love Affair and Adultery set:  Dumas’ Camille, Tolstoy’s Anna Karenina, and Flaubert’s Madame Bovary.  I love Anna and Bovary and have read both multiple time.  Is it time to return to Camille, which I barely remember?

What were your gap year, or dropout, reading experiences like?  They are intense, no?

11 thoughts on “The “Gap Year” Canon: How I Dropped Out, Tuned in, & Read the Classics”