Turgenev is one of my favorite Russian writers.

But I wonder:  Who reads Turgenev now?  My guess is he is one of Russia’s best-kept secrets. Sure, he is dubbed one of the “giants” of nineteenth-century Russian literature, along with Chekhov, Dostoevsky, and Tolstoy, but his name doesn’t resonate with the average reader.  Type the phrase “Turgenev reviews” on Google and you’ll find a paltry 206,000  results,  while “Chekhov reviews” garners 511,000, Tolstoy 453,000, and Dostoevsky 435,000.  Does this unscientific survey mean the other three are more than twice as popular!

Well, I read Turgenev’s short, luminous books over and over. No one writes better about love and politics. His characters include fiery nihilists, intellectual women, star-crossed lovers, and aristocrats who are nostalgic for a simpler time.  Their fervent discussions of love and politics not only reflect the concerns of 19th century Russia but of our own time.  They are as confused about politics as we were during the recent election. 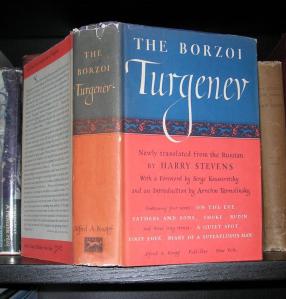 If you are a fan of elegant prose and originality, you’ve got to read Turgenev.  I have read his  gorgeous novels innumerable times and am jsut discovering the stories.   I recently  read  and enjoyed his 1850  novella, The Diary of a Superfluous Man.  (I read Harry Stevens’ translation in The Borzoi Turgenev, a collection of four novels and three long stories.)

Chulkatirin, the cynical hero of The Diary of a Superfluous Man, considers himself an unimportant man who accomplished nothing in his life.  He calls himself “a superfluous man.”  Literary critics adopted Turgenev’s phrase to describe a popular character type in 19th-century Russian literature.  Two of Chulkatirin’s “superfluous man” predecessors are Pushkin’s Eugene Onegin, and Lermontov’s Pechorin in  A Hero of Our Time.  All three are courteous, attractive, and well-educated, but are too cynical, bored, and contemptuous of society to define a goal or prove their high opinion of themselves. And they cannot resist fighting pointless duels.  (By the way, both Pushkin and Lermontov died in duels.)

As The Diary of a Superfluous Man opens, the dying hero Chulkaturin decides to start a diary .  He wants to analyze his life.   He claims he accomplished nothing and was unloved and superfluous.  He coins the phrase “superfluous man.”

Superfluous, superfluous…  I have thought of an excellent word.  The farther I penetrate into myself, the more closely I examine all my past life, the more convinced I am of the stern truth of that expression.  Superfluous–precisely.  To other people that word is not applicable.  People are bad, good, intelligent, stupid, pleasant, and unpleasant; but superfluous…no.  Yet understand me:  even without these people the universe could manage quite well–of course; but uselessness is not their main quality, not their distinctive characteristic, and when you speak of them the word ‘superfluous’ is not the first to come to the tongue.  But I–about me it is not possible to say anything else:  I am superfluous, and that is all there is to it. 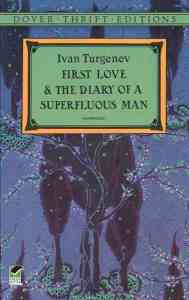 Chulkatirin sketches his early life, but then zeroes in on the events of the few short vivid months he spent in the district town O—-.  During his stay, he  fell  in love with Liza,  the pretty daughter of  Kirila Matveevich Ozhogin, a wealthy county official.  Though he had difficulty expressing himself and was not socially astute, Chulkatirin believed that her politeness indicated she returned his feelings.   Then Prince N. arrived, and Liza is radiant when he is in the room.  Chulkatirin assumes  her vivacity is aimed at him, not the prince.  Finally, at a ball, Chulkatirin cannot ignore her radiance as she dances the mazurka with Prince N. and realizes the two are in love.  He insults Prince N. and they fight a duel which proves to be ridiculous:  the superfluous man’s life is a comedy.  What does Chulkatirin gain by his passion?  Nothing.

Russian novels are chock-full of superfluous men, including the famous Bazarov in Fathers and Sons.  Finally I know the source of the phrase.

37 thoughts on “Turgenev’s The Diary of a Superfluous Man”