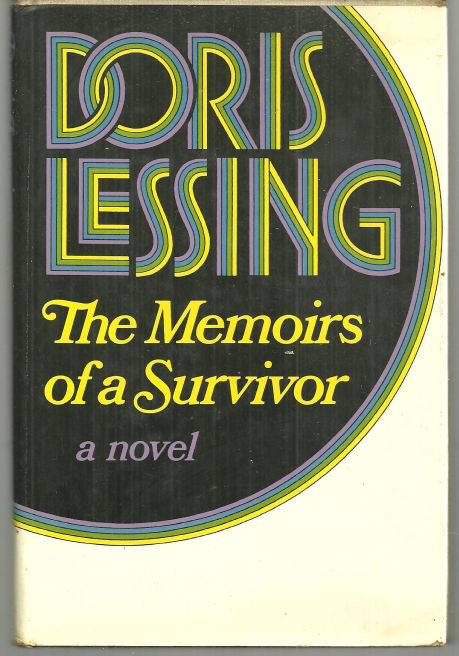 I’m checking in briefly to make a few remarks about Doris Lessing.   I  just finished rereading her superb 1974 post-apocalyptic novel, The Memoirs of a Survivor, and want to say a few words about it while it is fresh in my mind.

Some read The Memoirs strictly as dystopian fiction, but it is also a psychological, often surreal, portrait of Lessing. The narrator, an “older woman,” tries to understand the breakdown of society as the city crumbles around her and the media become increasingly unreliable and propagandistic.  She knows that eventually she will have to leave her flat, because the city is becoming dangerous, people must scrounge and barter, tribes of young people are leaving the city, and only the rich are still on the grid.  In a surreal scene, she becomes the guardian of a young girl, Emily: throughout the novel, the narrator struggles to help Emily, obviously her younger self  (and very like Martha Quest in The Children of Violence series).  You should also know that Lessing’s mother was named Emily, and that Lessing frequently explored mother-daughter relationships in her work.

A few years ago  Jenny Diski, in her “memoir” of Doris Lessing, which was first published in the London Review of Books, claimed that she was Emily in the novel.  Well, I was skeptical, but my assumption was that all writers and most sophisticated readers  realize that memoirs are to a certain extent made up, and that all would take this with a grain of salt.  Some of the material in Diski’s book is mined from Lessing’s novels,  without attribution.  So I was surprised that so many bloggers, at least, read her book as the literal truth about Lessing.  And so it makes me wonder about the breakdown of critical thinking, as well as the breakdown of society.  (But has there ever BEEN critical thinking?) 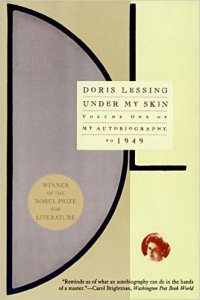 Well, obviously I’m not writing a thesis about this, but  tonight I opened Lessing’s Under My Skin:  Volume One of My Autobiography at random, and, as I suspected, my reading of The Memoirs is correct:  Emily IS Lessing (and sometimes Lessing’s mother)!

Compare these two incidents, one from Memoirs of a Survivor and one from Under My Skin, in which Emily/Doris is sadistically tickled by her father, a World War I veteran.  In Memoirs of a Survivor,  we see this scene because the narrator frequently visits the past: she travels behind the walls of her flat where there is another house in a different dimension in which rooms (her psyche) need tidying, painting, etc.  She also visits Emily/Doris’s past, set in different times, sometimes at the turn of the (20th) century, sometimes mid-century, but always long before the time of the events of the novel.  Well, Lessing was born in 1919, hence our travels through the 20th century.

From The Memoirs of a Survivor:

In a large chair set against the curtains, the soldier-like man sat with his knees apart, gripping between them the small girl who stood shrieking.  On his face, under the moustache, was a small tight smile. He was “tickling” the child.  This was a “game,” the bedtime “game,” a ritual.  The elder child was played with, was being made tired, was being given her allowance of attention, and it was a service by the father to the mother, who could not cope with the demands of her day, the demands of Emily.  …  her body was contorting and twisting to escape the man’s great hands that squeezed and dug into her ribs, to escape the great cruel face that bent so close over her with its look of private satisfaction. …  She shrieked, “No, no, no, no”…helpless, being explored and laid bare by this man.

From Under My Skin:

And then the moment when Daddy captures his little daughter and her face is forced down into his lap or crotch, into the unwashed smell–he never did go in for washing much, and–don’t forget–this was before easy dry-cleaning, and people’s clothes smelled, they smelled horrible.  By now my head is aching badly, the knocking headache of over-excitement.  His great hands go to work on my ribs.  My screams, helpless, hysterical, desperate.  Then tears…

… But I did not stop having nightmares about those great hands torturing my ribs until I was seven or eight.  Those nightmares were clear in my mind now as they were then, though the emotion has long gone away.  I became an expert on nightmares and how to outwit them when I was a small child, and the nightmare of being helpless and “tickled” was the worst.

A horrifying scene!  And I’m sure there is more, much more, in her autobiography to  parallel scenes in this novel.  I am writing this because I think it is important to realize that this novel is not about Jenny Diski.

Here is what Diski said (I don’t have her book, but I copied this excerpt from the LRB into a blog post a few years ago):

t made familiar and disturbing reading. I could see Emily in me, just as I could see my elderly neighbour’s description of me aged three. It is as accurate a reading of me as Emily’s harsh commentary on others. It is true, but it is, of course, a doubly edited version, a view of me from the narrator’s point of view, which itself has been taken and worked for fiction’s purpose from Doris’s point of view. If there is pity in the narrator’s response to Emily, it is strained for. I discovered after a while that Doris had a habit of describing people in fiction and in life as, for example, ‘heartbreaking’ in her most distant, coolest tone, as if to mitigate her dislike of them. She saw it as being fair, I think.

I do not believe for a minute that The Memoirs of a Survivor is about Diski.  It is a misreading, and, believe me, this is one of her kinder interpretations of Lessing.  I guess it’s possible to publish anything, if you say it’s about Doris Lessing.  Honestly!  Writers.  (I really have nothing against Diski,  but this book…ugh.)