Brenda had fashioned a bolster to put down the middle of the bed and a row of books to ensure that they lay less intimately at night. Freda complained that the books were uncomfortable—but then she had never been married.
—Beryl Bainbridge’s “The Bottle Factory Outing”

Well, it’s not quite that simple.

I enjoy her later work, which on some level can be labeled historical fiction. I loved The Birthday Boys, a flawless, entertaining novel based on Scott’s expedition to Antarctica.  But I find her early books both mordant and morbid, and though I admire them, I always think at the end, “God, I need to read Barbara Pym.” 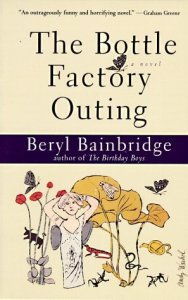 So I’m not quite a Bainbridge person.

This weekend I sped through her very short, witty, edgy novel, The Bottle Factory Outing. Her comically realistic portrayal of ill-matched roommates, Freda, a domineering big blonde, and Brenda, a  likable thirtyish woman who has recently left her husband, is hilarious.  The two women squabble constantly. Freda dominates, but Brenda protests.  Freda insists they take part-time jobs at a neighboring Italian wine-bottling factory:  she wants contact with the working class.  Freda tries to organize a union, but they pay no more attention to Freda ultimately than Brenda does. And I have to laugh, having known Fredas and Brendas.

It starts with a funeral—Freda cries as she looks out the window at a hearse with flowers on top.  Four paid men carry a coffin with an old lady down the stairs. Brenda doesn’t want to look.

“I like funerals. All those flowers—a full life coming to a close.”

“She didn’t look as if she had a full life,” said Brenda. “She only had the cat. There weren’t any mourners—no sons or anything.”

“Take a lesson from it then. It could happen to you.  When I go I shall have my family about me–daughters–sons–my husband, grey and distinguished, dabbing a handkerchief to his lips…”

Freda has no one:  she is an orphan, brought up by an aunt she never sees. And because she has no one, we have a flash of intuition that she might end up like the old woman. Brenda, on the other hand, comes from a big well-to-do family, went to private school, and still has contact with her husband and mother-in-law. When the  mother-in-law shows up  one day to threaten Brenda with a gun, Freda is envious that she excites so much passion.

At first we think Freda might be the weaker of the two, but she is the one who orchestrates their lives and needs action.  She first saw Brenda having a  breakdown in the butcher’s shop, weeping that her husband has left her (though it turns out that Brenda has left him). Freda loves to organize:  she takes Brenda under her wing and finds them a tiny flat where, unfortunately they must sleep in the same bed—and they are not gay.   Brenda puts a bolster and a pile of books between them at night so there can be no contact. I never thought of a book barrier!

Freda does not attract people—though it’s not that she’s not pretty. She is too brash and argumentative for the Italian men at the factory.  She has a crush on Vittorio, the factory owner’s nephew, but he is engaged to someone else. . Rossi, the boss, keeps cornering Brenda for a little bit of “fun”:  Brenda attracts men but wants nothing to with them.  Finally Freda marches into the office and tells Rossi to leave Brenda alone.  Freda organizes  a Sunday outing for the bottle factory workers because she wants to spend time with Vittorio.

Everything at the outing goes wrong.  And I do mean everything. The van doesn’t show up. A few people cram themselves into cars, but most have to go home.  .The boss, Rossi, drives them to Windsor park instead of the stately home Freda had arranged.  They tour Windsor Castle, and Freda is furious that the dungeon is closed.  Clearly she is heading for a fall.

After the picnic, the men play soccer.   There are walks in the woods and stones are thrown.  I won’t tell you who, what, when, why or how  but someone dies. And the book ends with a macabre funeral–coming back full circle.