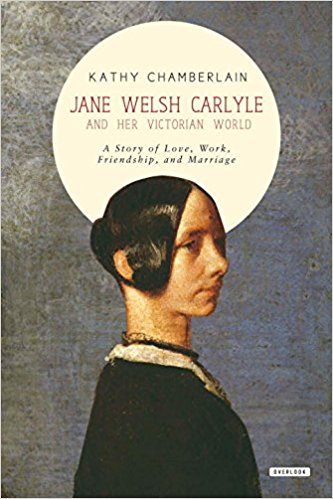 I love Victorian novels, but do not read many biographies.  I seemed an unlikely candidate for Kathy Chamberlain’s brilliant new biography, Jane Welsh Carlyle and Her Victorian World.

But the biography arrived in the mail, and I was intrigued by the introduction.  Virginia Woolf called Jane Welsh Carlyle, Thomas Carlyle’s wife, one of “the great letter writers.” Like many women, my friends and I were keen letter writers before the internet, so I was fascinated by the idea of what Elizabeth Hardwick called Jane Carlyle’s “private writing career.”

Kathy Chamberlain concentrates on a very short period, the years 1843–1849, which sharpens the narrative and vivifies  our understanding of Jane’s character. Jane is in her forties, 20 years into her (possibly sexless) childless marriage to Thomas, and though they are comfortable together,  she often must endure his gloom, depression, and egotism.  In the first chapter, Chamberlain describes the morning of December 18, 1843, at the Carlyles’ house in London.  She borrows novelistic techniques, setting a realistic scene and using quotes from the letters as dialogue. She introduces Jane, describes her dress, hairstyle, and pastimes.

As always in a thrifty Victorian household, much sewing needs to be done (clothing, not yet available ready-to-wear, is far cheaper when made and repaired at home), and the woman, Jane Welsh Carlyle, has resigned herself to tackling her basket of work today.  She would rather do the darning herself than hire a sewing girl to come in–such a nuisance to have a stranger girl around the house and underfoot.  Besides, residing in close quarters with a single servant, and a most eccentric one, is problematic enough.  Her maid-of-all work is busy just now with the baking–a faint fragrance of gingerbread rises from the kitchen below.

Then Carlyle enters in his long plaid dressing gown and throws his Oliver Cromwell manuscript in the fire, saying he must start over.  How would you like to live with that while you’re darning his socks?  One of Jane’s witty lines is:  “Cromwell must come to an end, or he and I will come to an end.”

Jane Carlyle was witty and popular, and knew many writers, among them Elizabeth Gaskell, Thackeray, Dickens, John Stuart Mill, Tennyson, Emerson, Geraldine Jewsbury, Harriet Martineau, and Margaret Fuller.  Everybody loved Jane and competed for her attention.  Indeed, men fell in unrequited love with her, and in one case that almost alienated her close friend Geraldine Jewsbury.

It is no wonder she was popular with writers.  She was a passionate reader. She and Thomas were both touched by Dickens’ A Christmas Carol, which inspired Jane to think more about the poor, and, at Thomas’s insistence,  to give two parties that Christmas. She also loved Charlotte’ Bronte’s Shirley:  she said she and Charlotte “must have been much together in a previous state of existence.”   She was infatuated with  Ludwick Tieck’s now forgotten historical novel, The Roman Matron, or  Vittoria Accorombona, set in Italy during the Renaissance, with a creative, philosophical, independent heroine who hates the thought of marriage.

As so often, husbands and wives do not always care for the same books. Naturally, Thomas doesn’t admireTieck’s book: he enjoyed it, but call it as untrue as opera.  Jane wrote, “And you do not like my beautiful Vittoria!–Oh what want of taste!”

Jane’s witty style reminds Chamberlain (and me) of Jane Austen.  But Jane disliked Austen, calling her books “washy waterygruel.”  In one hilarious letter, however, she writes about a scene in  life that reminds her of  a scene in Persuasion.  A gentleman she had noticed at an inn passes her admiringly in a public place.

He looked at me, but said nothing–and a minute or two after I saw him also drive past the window.  Some twenty minutes after; I started myself, in a little gig, with a brisk little horse, and silent driver–Nothing could be more pleasant–than so pirring thro’ quiet roads in the dusk–with the moon coming out–I felt as if I were reading about myself in a Miss Austin novel!“

Among her closest friends were the Italian revolutionary Giuseppe Mazzini and the novelist Geraldine Jewsbury.  Jane was very altruistic, befriending people with money problems and helping them find jobs. She had a long ambivalent friendship with a German translator, Miss Amely Bolte, for whom she found governess jobs.   But Amely often got on Jane’s nerves, staying in their spare room for too long between jobs.

Richard Plattnauer, another  German friend, had a nervous breakdown at a vegetarian commune and ended up in an asylum.  Jane consulted a doctor,  visited him at the asylum, and eventually arranged for him to come home with her .  His bipolar mood swings were hard to cope with, in the days before medication, but she took care of him until she could arrange for him to return to his family in Germany.

Although the Carlyles were comfortable together, there were marital problems.  Thomas became a little too close to Lady Harriet Baring, who had her own salon.

A writer in her own right, Jane led a full life.

A fascinating biography! And you can read Jane’s letters online.