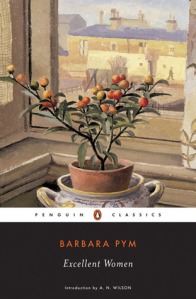 Like all of us prim-yet-not-so prim bachelor girls of the late 1970s, I used to read The New York Times Book Review cover-to-cover.  I lived above a bookstore, and around the corner from another bookstore, so sometimes I strolled downstairs  and bought the books.  One weekend I was thrilled to read about the revival of a neglected writer Barbara Pym.  Philip Larkin’s praise of her in the TLS  in 1977 had triggered American interest:    in 1978, Dutton simultaneously published two of her novels., Excellent Women and A Quartet in Autumn.

There’s something about spinster lit. I did of course buy both books, and read them in the company of my Siamese cat, a suitable familiar for a spinster.  But during a recent binge rereading of  Pym, I realized that Pym’s heroines are not all spinsters.  They may be spinsters at the beginning, but they are often attractive to men, despite their tweedy clothes, and sometimes they marry, or we learn in a later book that they have married:  for instance,  in An Unsuitable Attachment, we  hear secondhand that the heroine of  Excellent Women has married an anthropologist.

In Excellent Women, first published in 1952, the narrator, Mildred Lathbury, a clergyman’s daughter, works part-time for an organization which helps distressed gentlewomen.  She is astonished that “I should have managed to make a life for myself in London so very much like the life I had lived in a country rectory when my parents were alive.”  As you might expect, she is active in a neighborhood church, St. Mary’s, and is a friend of  Father Mallory and his sister, who live next door.  But she resents being viewed as one of those excellent women who are expected to put others’ interests ahead of their own.  And she is annoyed when one of the churchwardens teases her for watching the furniture movers in front of her house.  “I expect you know all about it.”

I suppose an unmarried woman just over thirty, who lives alone and has no apparent ties, must expect to find herself involved or interested in other people’s business, and if she is also a clergyman’s daughter then one might really say that there is no  hope for her.

Her new neighbor, Helena Napier, is the object of Mildred’s curiosity.  She has moved into the flat downstairs, and they will have to share a bathroom.  Helena is an anthropologist whose husband, Rockingham, a naval officer, is still in Italy,  where she claims he has  nothing to do “but be charming to a lot of dreary Wren officers in ill-fitting white uniforms…”  But he will join her in London soon.

The small events of Mildred’s daily life are richly observed.  She is slightly scandalized that Helena stays out late with another anthropologist, Everard Bone, with whom she is writing up their notes from 18 months in Africa.  Helena is out with Everard Bone the evening the charming Rockingham arrives, so Mildred gives Rocky a cup of coffee and soon they are gossiping about their shared love of Victoriana.  In subsequent chapters, Helena admits she is in love with Everard Bone, who does not return her affections. Rockingham is furious after Helena puts down a pan on a valuable wooden table and scorches it.  Helena moves out,  and   Mildred  washes all the dishes she left behind.  And then Everard loiters outside her office and asks her out for lunch.

Then there are parish troubles:  Mrs. Allegra Gray, a clergyman’s widow, moves into the flat in Father Mallory’s house and vamps him.   Before you can blink she is engaged to Father Mallory, and poor Winifred learns Allegra intends to throw her out of the house after the wedding.  She wonders if she could live with Mildred. (It’s not an option.)

Oddly, Mildred becomes the confidant of Rockhingham  and Everard Bone; she also occasionally hears from a school friend’s brother, William Caldicote (he seems to be gay).  And, annoyingly, everyone believes Mildred is in love with Father Mallory.  Surprises lie ahead for all:  when Allegra and Father Mallory break up, and smug Father Mallory approaches Mildred flirtatiously, she is happy to tell him that she was never in love with him.

Pym  is often compared to Jane Austen, but that is not quite accurate. The marriage plot, such as it is in Pym, is different, important, but not the be-all and end-all. And Pym’s gentle, whimsical humor falls somewhere between the spiky wit of Austen, the offbeat hilarity of Nancy Mitford, and the gentle charm of Dodie Smith. Pym is subtle and offhand in a droll way that always makes me smile.  And Pym is the only writer who can make me burst out laughing with the use of the words “anthropologist”  and “indexer.”   Even “researcher” can cause a chuckle.

I love Pym’s books, and Excellent Women is a gem.  More on the  Pym binge later.