Very depressing news: a bunch of political yahoos legislating a women’s reproductive dystopia on an overpopulated planet. As we will not be moving to Mars after all, despite the pulp science fiction dreams of the ’50s, which didn’t turn out so well in Ray Bradbury’s The Martian Chronicles, access to information about birth control (not just “family planning”) and abortion might slow population growth and extend human life on a ravaged Earth. Why not pass a law requiring birth control and limiting the number of children each woman can have? No, of course I don’t support such a law, but it is no more absurd than canceling funding for Planned Parenthood. Seriously, rich women will continue to find good health care and abortions, while the middle-class and lower-income women pay the price. Back to the ’50s, honey, in an apron!

Well, on a lighter note, we went to the Planned Parenthood Book Sale, which is held twice a year on the Iowa State Fairgrounds.  And so we did something to support women’s health.

We didn’t go on the first day, and the tables were picked over by the time we got there.  But we enjoyed ourselves, and came home with many books. 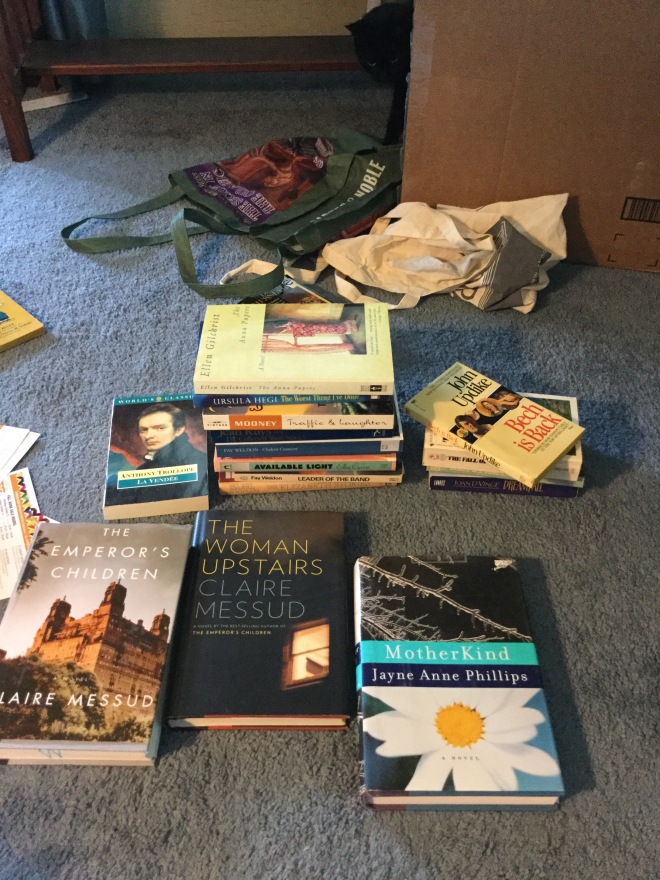 The classics were picked-over, but I did find a copy of Trollope’s La Vendee, John Updike’s Bech Is Back, and The Collected Stories of Jean Rhys.

Because the books on the tables were thinned, I spotted more contemporary fiction than usual.  Many people have recommended Claire Messud so  I picked up The Emperor’s Children and The Woman Upstairs. And I was thrilled find Jayne Anne Phillips’ MotherKind (2000), a novel that tells the story of a woman caring for her dying mother and giving birth to her first child.  Phillips truly is a great American writer.  So many don’t hold up, but she gets better and better. 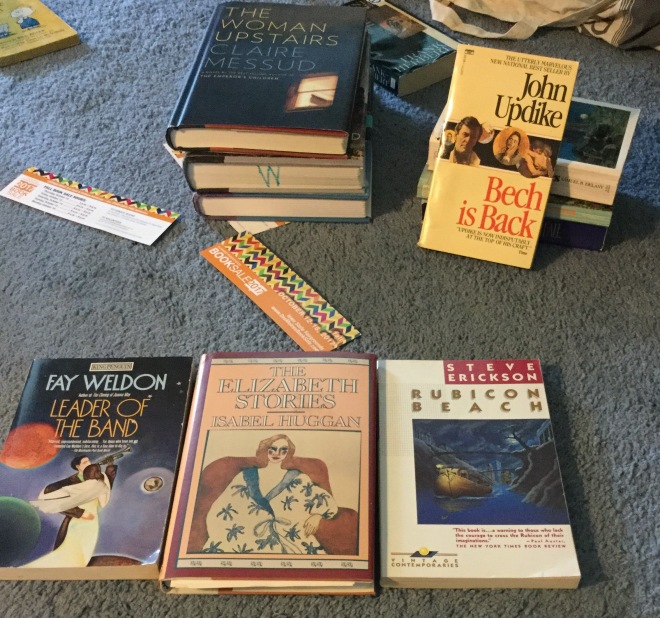 I love Fay Weldon, and should never have weeded her books, because I now have an urge to reread them.  I was pleased to find Leader of the Band.  Isabel Huggan is a Canadian writer:  I actually reviewed The Elizabeth Stories in the ’80s and have a vague idea of having been very kind.  So will it be as good as I thought or said?    (I shall find out.)  Steve Erickson’s Rubicon Beach is described as “part science fiction, part surrealist love story, part political fable.”  Sounds like my thing.

You can’t go wrong with Ellen Gilchrist, a stunning Southern writer who won the National Book Award for her collection of stories,  Victory over Japan.  I found another Fay Weldon, Chalcot Crescent, published by Europat.  And of course there’s the Jean Rhys.  In the background of this pic on the right are three mass market science fiction books, Samuel R. Delany’s The Fall of the Towers, John Wyndham’s Rebirth, and Joan D. Vinge’s Dreamfall.  I know these authors but not these particular books.

I used to be a fan of Ted Mooney and suspect I may have read Traffic and Laughter,  but I picked it up for $1.  Ellen Currie was very popular and well-reviewed in the ’80s but this book does look a little dated.  We shall see.  We all read and loved Ursula Hegi’s lyrical novel, Stones from the River, which was an Oprah selection, but I missed this 2007 novel and it looks very good indeed.

It’s fair to say we had a good day at the sale.

8 thoughts on “Dystopia and the Planned Parenthood Book Sale”