On a sunny spring day in 2017, I sat on the porch rereading Tolstoy’s Anna Karenina. I was sipping tea and reading a hefty Vintage paperback edition of the Maude translation of the novel instead of preparing a lunch from a Martha Stewart recipe for cousins visiting from Marshalltown.  Knowing they would be late, I lounged on the Barcalounger, surrounded by bookcases and boxes filled with the overflow from the Planned Parenthood Book Sale. The branches on the maple tree in the yard had finally leafed and the porch was in shade and alternate wavy bars of light. One cat perched on the top of the  Barcalounger  chewing my hair (she likes my shampoo) and the other sat on my lap tapping me with her paws to be petted. 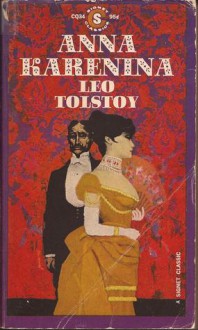 I cannot tell you how many times I have read Anna Karenina. Or rather I can, but won’t. I first read it under inauspicious circumstances at the age of fifteen, after my father semi-kidnapped me from my grandmother’s house, with my grandmother and mother sobbing for me to stay, and even physically trying to restrain me. (My father was separated from my mother, and it was the first time he had paid attention to me in my life, perhaps to get back at my mother, she thought.)  We camped in the basement of Dad’s friend the poet’s house in Coralville, where I was “literally,” as the poet said, sleeping under the workbench among his carpentry tools. I spent hours reading Anna Karenina on the cot under the workbench, under a glaring light, because I had no privacy and there was nothing to do.  Corvalville was too far away from Iowa City to see my friends every day after school.  And so I was stuck with Anna, though I’m not sure she left much impression on me.

The next time I read it I was 20, and I had been married for a year to a kind older man. It is foolish to marry when you are young, I realized as I watched my husband get drunk night after night, pass out on lawns, and eventually get fired from his  job for leaving the  premises to go drinking in a bar.  “Why does he drink so much?” a friend hissed at me.  I tried to cover for him, as one does.  “He only does this at parties.”  The cover-up was part of the relationship with an alcoholic.

I had to leave and I knew it.  I had to find the energy to leave. As so often in these circumstances, there is both co-dependence and a flattening fatigue before you get your act together.  An intense reading of Anna Karenina helped me escape and process the situation.  I identified with her and imagined myself in the 19th-century Petersburg society, where  I fantasized that would fit like a charm, despite my jeans, t-shirts, walking sandals, and drip-dry hair, and the fact that my very average prettiness had been much exaggerated by my mother. Still, I  perfectly identified with Anna’s revelation that she did not love Alexis Karenin, just as I knew I didn’t really love my Alexis.   My situation was not as sticky–no children, no high society, no house–but eventually I had to face it.  I went off with my clothes and books in a shopping cart, like a bag lady.

I was in my fifties when I last read it. After a certain age, you read differently.  There is less identifying with characters; more focus on less familiar parts of the text and subtexts.   I concentrated more on Kitty and Levin during that reading than Anna and Vronsky.  But there is one constant in my reading and rereading:  I prefer the 1918  translation by Louise and Aylmer Maude, which Tolstoy approved, to all the others. 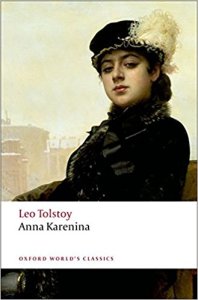 I now snap up paperbacks of the Maude, because I see it being edged out by modern translations and worry that it may fall out of print altogether. You can’t have too many copies: sometimes I give them away. I like to have a copy of Anna Karenina in every room, says the Tolstoy-obsessed reader. When I leave off reading, I note the chapter number (the page number does no good) on a slip of paper and return to the book later in another edition in another room, between household tasks or while cooking. The strikingly designed red Vintage Russian Classics Series tome is my newest: I bought it for the print size, which is slightly larger than the print in my other copies: two Oxford editions, a paperback with the Maude translation and a hardcover with the new Rosamund Bartlett, the Modern Library edition of Constance Garnett, and a 1975 Folio Society edition with Rosemary Edmonds’ excellent translation.

Weddings, marriage, and infidelity: it’s all a big part of Anna Karenina. The critics say it is a family novel, and, indeed Tolstoy confided in his wife that what he loved about it was the family aspect. He did not entirely approve of Anna: he was inspired by fragments of Pushkin about an unfaithful wife; he also had seen the corpse of Anna Pirogova, a landowner’s mistress who committed suicide by throwing herself in front of a train. But during many drafts, he made her a more sympathetic character.   And He was influenced by the development of the European novel, especially French and English novels, says W. Gareth Jones in the 1995 introduction to the Oxford World Classics edition:

…Tolstoy showed that he had understood the development of the European novel, its capacity to range over society, to cram its pages with a throng of individualized characters and yet to maintain an overall design, and convey an author’s view of life.

And I personally find Anna very sympathetic.  She tends to excite controversy among reader. Some find Tolstoy’s portrait of her sexist; others find her selfish; still others love her. I love Anna in all her different facets:  Anna, graceful and animated in a black gown at the ball, dancing with handsome Vronsky; Anna, negotiating a truce between her adulteours brother Stiva Oblonsky and his wife Dolly, who is shattered at finding a note indicating he is having an affair with the former governess; Anna, terrified at the races when Vronksy’s horse falls and has to be shot. Ironically, later in the book, when Anna has fallen in love with Vronsky and wants to leave her husband but keep her son, her brother Stiva Oblonsky tries to persuade Karenin to divorce her. Tolstoy tars Stiva and Anna with the same brush:  they are  adulterers. But there is a double standard;  Stiva’s adultery is tolerated and Anna’s makes her an outcast and leads to tragedy.

When Anna coaxes Dolly to forgive Stiva for adultery, she is warm, listens closely, and feels compassion for Dolly’s grief.  Anna does not yet have her own marital problems.  Things are not complicated for her.  Her simplicity and honesty are obvious.  This exchange sums it up:

“‘But suppose the infatuation is repeated?’

‘And you, would you forgive?’

‘I do not know, I cannot judge…. Yes, I can,’ said Anna, after a minute’s consideration. Her mind had taken in and weighed the situation, and she added, ‘Yes, I can, I can. Yes, I should forgive. I should not remain the same woman—no, but I should forgive, and forgive it as utterly as if it had never happened at all.’”

When I was young, and failed to understand the complexities of marriage, I identified completely with Anna.  Now that I do understand, I consider Karenin’s grief (he is repulsive, but he grieves), and Kitty’s new maturity after marriage, and her role in helping Levin’s dying brother.  Every time I read it I see a scene in a new way.

So back to the Barcalounger for more AK.  And, remember, any time you come to my house, there are plenty of copies for you to read!

9 thoughts on “Musings on Anna Karenina on a Spring Day”