Can coffee cure your headache?

We were on a road trip this weekend. We ended up in  Clear Lake, Iowa.

Do you like road trips? My husband  is an interstate man.  We do not see the lovely scenery:  we see cars, construction, and rest stops.  So, no, I’m not a fan of road trips.

But every summer there are Shakespeare festivals in  small university towns.   And so we were on our way to Winona, Minnesota, to the Great River Shakespeare Festival to see Richard III.

How many times have I seen Richard III? Thrice?  Four times?  We’ve seen good productions, and bad productions. The bad ones are fun, too.  Actually, the best  I’ve seen was not in Stratford, as you might think, but in Winona in 2005.  I remember Jonathan Gillard Daly hunching around with a sinister, yet mesmerizing manner.   As the Winona Daily News said, “Richard is one bad dude. But he’s kind of fun.”

Why do we enjoy Richard III?  Years ago, in a very smoky Shakespeare class (everybody chain-smoked then),  I wrote a paper on  Richard III and the Richard III-obsessed detective in Josephine Tey’s mystery, The Daughter of Time.  Long before my blogging days,  I gambled on pop culture treatises, guessing that a light essay would be a relief from  the paraphrases of the Pelican Shakespeare.  (And by the way, I reread  The Daughter of Time a few years ago and posted about it here.  And I appreciate Detective Alan Grant’s obsession.) 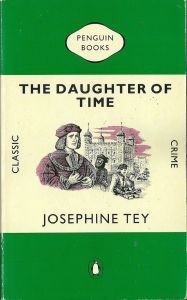 Anyway, there I was this weekend,  sitting in a hot car, on the way to see Richard III.  It got hotter, hotter, and hotter, and suddenly my head felt as if it were splitting.  I moaned, “I’ve  got heat stroke.”

My husband explained that if that were the case my whole body would go into shock and I would  be dead.

But we did find a place called  Cabin Coffee.  The coffee was weak and there were no sleeves for the cups.

So we missed our Shakespeare. We turned around and drove home.  Hours later, I diagnosed my illness (online!) as a migraine.  I took more Advil, sinus pills, and brewed up various herbal teas.   The head-splitting feeling went on well into Sunday.

Now that my migraine is gone, I think I’ll read my Shakespeare.  But first, look at this  charming photo of Captain Picard (Patrick Stewart)  holding his copy of Shakespeare on Star Trek:  The Next Gen. 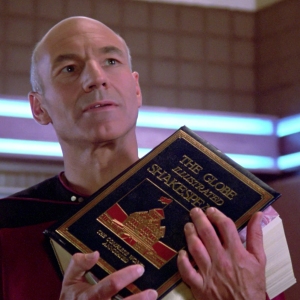