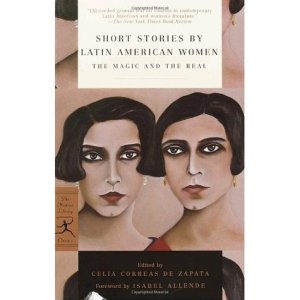 I missed the so-called” Latin American boom” of the ’60s and ’70s. I was not seduced by magic realism.  In fact, I did not finish Gabriel Garcia Marquez’s A Hundred Years of Solitude on a beach vacation in Mexico where I got the worst sunburn of my life.  ( I wasn’t happy till I found a bookstore in Veracruz.)  It wasn’t until  years later that I discovered the surreal stories of Borges.  Then I fell in love with  Garcia Marquez,  Julio Cortazar, Pablo Neruda, and Octavio Paz.

I realized recently I have read only a  few Latin American women writers; in the last decade, only the brilliant Isabel Allende and Angelica Gorodischer, the Argentine science fiction writer who has been translated by Ursula K. Le Guin, come to mind.

And then I found this stunning anthology, Short Stories by Latin American Women:  The Magic and the Real, edited by Celia Correas de Zapata.  It includes the work of 31 writers, among them Allende, Clarice Lispector, and  Josefina Pla.   The stories are so marvelous that I tried to find their books.  Very few of these wrtiers have been translated.

Men have traditionally dominated Latin American literature.  And I wonder if that is still true of the translators.

This book is a gem:  at the end, there are short biographies of all the authors and translators. Isabel Allende writes in the preface:  “For women in South America, setting down a short story is like screaming out loud; it breaks the rules, violates the code of silence into which we were born.  Through these stories, each author selected by Dr. Zapata shouts out defiantly and reveals our experience to the world.”

Allende’s short story, “An Act of Vengeance” is my favorite. Her always colorful, poetic language is interwoven seamlessly with a plot made vivid by magic realism.    The style reminds me of that of Louise Erdrich, and the opening sentence is worth the price of the book.

On the glorious noonday when Dulce Rosa Orellano was crowned with the jasmines of Carnival Queen, the mothers of the other candidates murmured that it was unfair for her to win just because she was the only daughter of the most powerful man in the entire province, Senator Anselmo Orellano.

Dulce Rosa is beautiful, not so much physically as for her charm, grace, and infectious happiness.  Tales of her beauty have spread, and poets in distant cities praise her. Even the guerilla Tadeo Cespedes  has heard of her, but never dreams he’ll meet her.  And then Tadeo raids the town of Santa Theresa with 120 men, and kills  the senator, who is the last man standing.  The sight of Dulce Rosa drives Tadeo into a frenzy, and he rapes her. As she washes off his semen, she vows she will get revenge.  Thirty years go by…and the plot twists and turns.

In  “Culinary Lesson,” Roario Castellanos’ humorous monologue is reminiscent of a Dorothy Parker story mixed with the musings in Sue Kaufman’s feminist classic, The Diary of a Mad Housewife.  The heroine cannot cook, and cannot understand the cookbooks, and I empathize.  In Rosario Ferre’s “A Poisoned Tale,” a fairy tale book turns out to be lethal for an evil stepmother.  In “Blame the Tlaxcaltes,” a wretched housewife lives in two different times, with two different husbands, and only the maid understands she does not belong in the present.

I could go on, on, and on, but you’ll have to read it.  I  am giving it to everyone for Christmas.

And it’s Women in Translation Month.  Finally, something I can get behind!

8 thoughts on “Short Stories by Latin American Women: The Magic and the Real”