Did you know the translation of classics is male-dominated?  Check your bookshelf:  is Aeschylus’s Oresteia translated by Robert Fagles, Richmond Lattimore, or Ted Hughes?  How about Ovid’s Metamorphoses? Maybe  David Raeburn, Allen Mandelbaum, Charles Martin, or Rolfe Humphreys is the translator.

I never considered the issue of women translators of classics until I read Emily Wilson’s brilliant article in the Guardian,  “Found in Translation:  How Women Are Making the Classics Their Own” (July 7, 2017).  Wilson, whose new translation of Homer’s Odyssey will be published this fall, writes a compelling case for women translators after centuries of men.

For hundreds of years, the study of ancient Greece and Rome was largely the domain of elite white men and their bored sons. One might assume optimistically that things have changed. After all, women from a wide variety of backgrounds are now able to enrol at prestigious universities and colleges and learn Latin and Greek from scratch; knowledge of the ancient languages is no longer open only to men. But the legacy of male domination is still with us – inside the discipline of classics itself and in how non-specialist general readers gain access to the history and literature of the ancient world.

She says in the last decade we have begun to see more women translators of classics:  she mentions Caroline Alexander, Pamela Mensch, Sarah Ruden,  and Josephine Balmer.  On my shelves I have Betty Rose Nagle’s brilliant translations of Ovid’s Fasti and Statius’s Silvae, the classicist/poet Anne Carson’s Euripides, and Susan H. Braund’s  Civil Wars by Lucan.  That’s it.

If not for Wilson’s article, I would not have discovered the clever, charming book by Yopie Prins,  Ladies’ Greek:  Victorian Translations of Tragedies. I am reading it with great enthusiasm.  And I would say this is not just for classicists, though it helps to know Greek tragedies. The book revolves around Victorian women classicists, writers, and poets who translated tragedies, among them Elizabeth Barrett Browning, Virginia Woolf, H.D., Amy Levy, and Edith Hamilton.

Elizabeth Barrett Browning was very keen on Greek, and the phrase “lady’s Greek”  comes from her  novel/poem, Aurora Leigh.  The heroine of the poem, Aurora Leigh, is a passionate reader of Greek who hopes to become a  poet.  Her cousin Romney, who proposes to her on her 20th birthday  cannot resist teasing her, i.e., denigrating her education.  He mocks her Greek marginalia in a book of poems.

Here’s a book I found!
No name writ on it–poems, by the form;
Some Greek upon the margin,–lady’s Greek
Without the accents.

The phrase “lady’s Greek” implies that Aurora does not really know Greek: in her personal notes, she has omitted the accents and breathing marks.  Browning may have encountered such sexism. She  was so passionate about Greek that she once wrote to the scholar Hugh Stuart Boyd, with whom she used to read Greek, “I intend to give up Greek when I give up poetry; & not till then!” 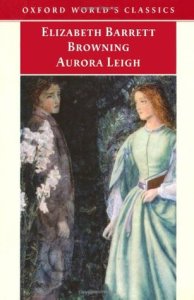 Mind you, I am as thrilled to read about Victorian women classicists  as about famous poets and novelists, but you will probably be more interested in the latter.  Fans of Woolf may have read  her essay, “On Not Knowing Greek.”  And, truly, she did not know Greek very well.  She studied as  a young woman with a Miss Janet Case (whose background Prins also describes).  At the age of 40,  Woolf returned to Aeschylus’s Agamemnon before she wrote her essay.  And she was rusty.

To give you an idea of the challenge Woolf faced–her Greek was far from fresh–let me tell you that even scholars use dictionaries and grammars to translate tragedies.  Ancient Greek  is not a spoken language, the dialects can be difficult,  the vocabulary is entirely different from that of prose, and you are reading writers over a period of many centuries. So Woolf devised a crib for Agamemnon, consisting of a Greek text cut and pasted into the notebook, with Arthur Verrall’s English translation copied out in her own handwriting on the other side of the page. She began to realize it was impossible  for her to read the mystical and occasionally mystifying Greek quickly.  As she pored over the obscure poetry of Aeschylus, she wrote, “it is necessary to take that dangerous leap through the air without the support of words.”  (I think a better grasp of Greek grammar also would have helped.)

Prins is equally adept at portraying the Victorian women who first studied classics at Newnham College, Cambridge, and Somerville college, Oxford.  Agnata Frances Ramsay was the first woman to receive Top Honors in Part One of Tripos Examination at Cambridge.  How was she rewarded by the press?  A cartoon in Punch portrayed her stepping into a train coach marked First Class and Ladies’ Only, next to Punch himself and a dancing dog:  Samuel Johnson said an educated woman preaching is like a circus dog performing tricks.

After graduating from Newnham, Cambridge, Jane Harrison had an enormous influence: she popularized Greek through lectures, classes, and articles in women’s magazines and popular journals before returning to Cambridge to teach.  And Helen Magill, an American with a classics degree at Swarthmore who went to Cambridge  only to get a third in the Tripos at Cambridge–she blanked out–went back to the U.S., earned a Ph.D., and taught Greek in the women’s annex at Princeton.

Magill developed her own theory about studying Greek. She wrote, “Latin and Greek are by far the best instruments for training the mind in grammar and logic, but this training should not come first.  Every language should be studied as an art before it is studied as a science.”

This is very much like Virginia Woolf’s theory.  I myself think art and training should be simultaneous.

I am reading and loving this book, and  I do think many of you would enjoy it.

9 thoughts on “Reading the Classics and Yopie Prins’ “Ladies’ Greek: The Victorian Translations of Tragedies””