I am still reading Yopie Prins’s Ladies’ Greek:  Victorian Translations of Tragedies, a lively history of Victorian women who studied and translated Greek tragedies.  Some were classicists; others amateurs. An entire chapter is devoted to Virginia Woolf”s Agamemnon notebook.

Elizabeth Barrett Browning was a passionate Greek student, and the phrase “lady’s Greek”  comes from  her novel/poem, Aurora Leigh.  The heroine, Aurora, is a passionate reader of Greek, but her cousin Romney teases her about the Greek marginalia in her book of poetry. He denigrates her Greek, implying that it is not up to the level of the typical schoolboy.

Were the men defeated by Crosby and Schaeffer?

Inspired by EBB, I got out my Greek copy of Prometheus Bound (there is a translation by EBB) and suddenly realized:   I took an actual “ladies’ Greek” class as an undergraduate! Don’t get me wrong:  it was real  Greek, of the kind American schoolboys learned in the 1920s, in a “minimalist”  textbook known as Crosby and Schaeffer.  We  memorized paradigms and translated sentences like: “The satrap himself wrote as follows” and “Not being able to find the road, the captain perished.” And we loved it!

All the men dropped out of  Greek after the first rigorous year. What wimps!  Yes, we fair ones are the strong sex.  In second-year Greek, six or seven of us women ecstatically pored over Lysias and Euripides.  Some of us studied Greek for classics or related majors; others were enthusiastic but had less time.  And this was the situation of many of the classicists and amateurs in Prins’ book.  Populizers of Greek like Jane Harrison and Edith Hamilton encouraged the study of Greek for women, with an emphasis on  art as well as grammar.  Virginia Woolf, returning to Greek in middle age, had to devise a system by which she could read Agamemnon with a crib.  Her Greek was rusty, and she finally discovered a way to muse on the Greek words but also read quickly with the crib.

Was there sexism in our “ladies’ Greek” class?  Well, yes, but it was often hard to distinguish between sexism and classism.  Our professors were men with elite educations. They would much rather NOT have been teaching at state universities. Once this was actually discussed in front of us women, when a male transfer student from an elite school chatted to our professor about how unimpressed he was by our university.   Yes, the professor  regretted the low level.   Well, we women were not impressed by the young man’s Greek, who was not held to the same high standard we were. Our professor was one of the best teachers I have ever had, regardless of what he thought of us.   And the strict training in grammar, translation, and prosody prepared us well for a Hellenistic future.  Not that it ever arrived!

One other incident has stayed with me.  A friend from Greek class and I attended an evening lecture on Boethius.  (I was also an earnest Latin student, and though I had not read Boethius in Latin, I had read an English translation.) The professor asked us after the lecture what we thought of it.  Like the unpolitical babes in the wood we were, we told him we found it very dull indeed. (And it was–so dull!) “It might help if you read Boethius,” he said.  “We did,” we replied,.  (‘Nuff said?  Bit weren’t we silly not to say we thought it brilliant?)

In graduate school in classics, there was no more ladies’ Greek.  The number of male and female students 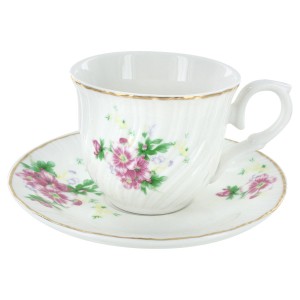 was roughly equal. And, as far as I could tell, we were all treated equally. I had an independent study in Plato at a professor’s house:  there was much chinking of teacups and dropping of notes, but, as he said, my Greek was very good. My priority in graduate school was improving my Greek and Latin, and teaching.  I must confess I did not read many of the very, very, very dull articles assigned in classical journals because most of my time went to languages, and nary a one of these articles was relevant to my master’s exams.  And if I didn’t have time to read novels, I would go mad.  I mean I needed it!  Without Dickens or Trollope at the end of the day I could not sleep!

My one great disappointment in grad school? I did not take the Aeschylus seminar!  Greek prose composition (which I also loved) was scheduled for the same time, and I did need that course.  Can I go back in time? The professor retired.  And, really, I do not live near a university with a classics department. Fortunately I relearned my Greek grammar in middle age and hence dip into Aeschylus on my own. I am elbow-deep in dictionaries and grammars.

And that is something we Ladies in Greek do. We relearn our grammar, get out our vocabulary lists, and go for it! 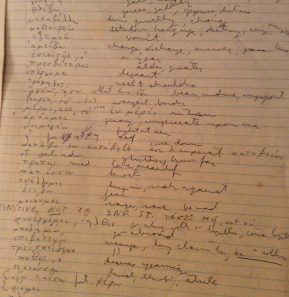 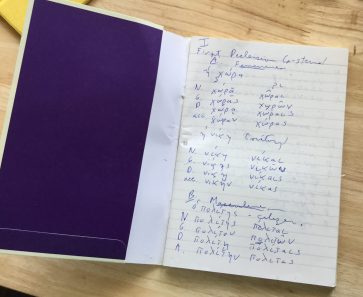 3 thoughts on “My Experience with “Ladies’ Greek,” in the Free-Wheeling 1970s”