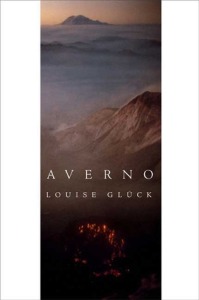 Louise Glück, the winner of the Pulitzer Prize, the National Book Award, and the Bollinger Award, often writes poetry based on myths.  The title of her 2006 collection, Averno, refers to a crater lake in Italy, which is the mythic gateway to the underworld of the dead, known as Avernus in Latin—you may remember it from Virgil’s Aeneid.

Glück’s  book is nothing like Virgil’s: it provides a woman’s view of the underworld.  The cycle of poems revolves around Persephone, the goddess of spring and summer, abducted and raped by Hades, her uncle, the god of the underworld.  Her mother, Demeter,  searches the earth for her daughter, and upon discovering her  whereabouts,  makes  a deal with Zeus,  Persephone’s father, to bring Persephone back.  Unfortunately,  Persephone has eaten six pomegranate seeds in the underworld;  thus she can return above ground only six months a year, in spring and summer.

In Averno, Gluck meditates on the soul, death, and winter.  Sometimes the observations are modern, from the perspective of the poet/artist, an older woman confronting the specter of death, and other times in the form of a narrative of Persephone and the dead.  The persona of the poem doubts the effectiveness of Persephone’s return from the dead, and the magic work with flowers and food.  She wonders if Persephone wouldn’t prefer to be dead. At one point, in “Persephone the Wanderer,” Glück writes that the rift in the human soul “should be read/as an argument between the mother and the lover–/the daughter is just meat.”

She does know the earth
is run by mothers, this much
is certain. She also knows
she is not what is called
a girl any longer. Regarding
incarceration, she believes

she has been a prisoner since she was a daughter.

In “A Myth of Devotion,” she writes about Hades’ creepy plot to abduct Persephone.  He built a duplicate of Earth below the ground, including the meadow where she picks flowers.  And he watched her for years before he took her.

Later in the book, there is a second version of “Persephone the Wanderer,”the emphasis on Demeter’s complicated relationship to her daugher.

In the second version, Persephone
is dead. She dies, her mother grieves–
problems of sexuality need not
trouble us here.

A powerful collection of poems, but very, very bleak.  Beneath the stark language, there is emotion.

Well, I opted for Penny and loved it:  Still Life, set in Quebec, in the mythical village of Three Pines, is mainly a police procedural, but there are elements of the cozy. The village is charming, hardly the place where you’d expect a murder. The residents are artists, poets, bookstore owners, bed-and-breakfast owners, and other entrepreneurs.

Chief inspector Gamache is philosophical in the manner of Simenon’s Maigret.  He listens very carefully, notes details, speaks little,and quotes poetry. And it all adds up to solving crimes.    Experienced detective though he is, he is shocked to see the body of Miss Jane Neal, a beloved retired teacher,  shot by an arrow in the woods.

Chief Inspector reacts with sorrow as he leans over the body.

The scent of mothballs, his grandmother’s perfume, met him halfway. Jane’s gentle and kindly eyes stared as though surprised to see him.

He was surprised to see her. That was his little secret. Not that he’d ever seen her before. No. His little secret was that in his mid-fifties, at the height of a long and now apparently stalled career, violent death still surprised him. Which was odd, for the head of homicide, and perhaps one of the reasons he hadn’t progressed further in the cynical world of the Sûreté. Gamache always hoped maybe someone had gotten it wrong, and there was no dead body. But there was no mistaking the increasingly rigid Miss Neal. Straightening up with the help of Inspector Beauvoir, he buttoned his lined Burberry against the October chill and wondered.

The mystery is  riveting.  Was it an accident? Was it murder?  There is an archery club in the village. So many opportunities. But oddly it happened only after Jane’s first painting was accepted in the local art show.  Was something stirred up by the painting?

It is well-written and great fun.  But it was very hard to get anything done until I finished it! And I do feel a need to read the second one. But I must be disciplined.  More Penny on the weekend!