Thomas Hardy is one of my favorite novelists.  In the last week and a half, I have reread three Wessex novels, The Woodlanders. A Laodicean, and The Well-Beloved.  In our mellow golden autumn, Hardy’s fictitious countryside, Wessex (based on his native Dorset), seems particularly vivid to me.  I do wish I could travel to Wessex,  but, no, I’m more likely to watch the film of The Woodlanders.  (Is it any good?)

I loved two of these books, but, alas!  I have never been able to warm up to The Well-Beloved. Considered one of his lightest novels, it has always struck me as very chilly.  Is  it a novel?  Is it a fable?

Hardy is a passionate writer, and though critics attacked the sexuality and sensuality of Tess of the d’Urbervilles  and Jude the Obscure, somehow The Well-Beloved slipped under the radar. 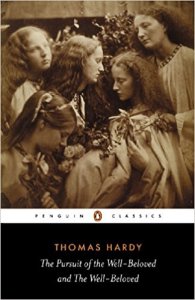 Perhaps Hardy was influenced by Wilde’s The Picture of Dorian Grey in the conception of this odd little book.  The handsome hero, Jocelyn Pierston, a sculptor, is something of a womanizer for decades.  He is always in love,  but “the Well-Beloved,” as he calls his love of the moment, migrates from one woman’s body to another.  And since the Well-Beloved keeps shifting shape, he does not hold himself responsible for hurting rejected lovers.

To his Well-Beloved he had always been faithful; but she had had many embodiments. Each individuality known as Lucy, Jane, Flora, Evangeline, or what-not, had been merely a transient condition of her. He did not recognize this as an excuse or as a defence, but as a fact simply. Essentially she was perhaps of no tangible substance; a spirit, a dream, a frenzy, a conception, an aroma, an epitomized sex, a light of the eye, a parting of the lips. God only knew what she really was; Pierston did not. She was indescribable.

In the course of the book,  Jocelyn falls in love with three identical women of different generations of one family: his childhood friend, Avice Caro; her daughter, Ann Avice; and Ann Avice’s daughter, Avice.  And isn’t that the ultimate male fantasy?

At 20,  Jocelyn visits his father on the “Isle of Slingers” (Portland, Dorset), and falls in love with his childhood friend, Avice.  She is sweet, funny, and well-educated, though Jocelyn doesn’t quite approve of the education.  And it turns out she even recites poetry on a platform at the Street of the Wells.

As always, Hardy’s dialogue is humorous.

‘Recite!’ said he. ‘Who’d have thought anybody or anything could recite down here except the reciter we hear away there—the never speechless sea.’

‘O but we are quite intellectual now. In the winter particularly. But, Jocelyn—don’t come to the recitation, will you? It would spoil my performance if you were there, and I want to be as good as the rest.’ 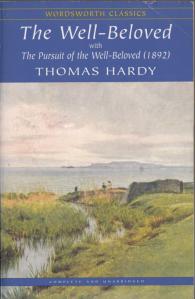 Jocelyn and Avice become engaged, but on the eve of his departure, she writes him a letter canceling their evening rendezvous, because she does not want to “carry out the Island Custom in our courting” (pre-marital sex!), nor does she want anyone to think they have.   Ironically, the cancellation means he meets another woman that night, the beautiful, rich, shallow Marcia.  And so he and Marcia get engaged–and he never sees Avice again.  But he and Marcia break up, too.

Hardy ironically underlines Jocelyn’s faults, and with age the course of love does not run smooth.   At 40, Jocelyn, now a famous sculptor and member of the Royal Academy, returns to the island, still single.  Avice ‘s funeral is in progress, but he glimpses her daughter Ann Avice and falls in love: she looks just like Avice, is even prettier, though, it turns out, is entirely uneducated. The family had fallen on hard times, and Ann Avice works as laundresses. Joceyln rents a castle on the island, and flirts with  Ann Avice when she delivers the linen.  But he has met his match in Ann Avice.  Like Jocelyn, she is always in love, but it never lasts. And when she accompanies him to London to work as a servant….It’s not what you think!

And then twenty years later, when Jocelyn is sixty, he meets the new Avice, the original Avice’s granddaughter.  And it’s so ridiculous I won’t even tell you about it.

Hardy does have a sense of humor.  Jocelyn is not a particularly sympathetic hero.  But this book is so light.   Kind of a male fantasy, except that Hardy undercuts that with his wit and irony.

I’m sure someone out there loves this book.  Alas, it is not for me.

6 thoughts on “Thomas Hardy’s The Well-Beloved”