I may be embarking on an Alison Lurie binge, thanks to Nancy/Silver Season’s recommendation of Lurie in a comment on my post, “Are University Towns Paradise?”

Years ago I read a lot of Alison Lurie, who won the Pulitzer Prize in 1984 for Foreign Affairs, a witty novel about two American professors on sabbatical in London.  She was very popular in the ’80s and ’90s, and my favorite was The Truth about Lorin Jones, a novel about a biographer.

Do people still read Lurie?  Alas, our library has discarded Lurie’s books, so I searched online bookstores.  I found an e-book of her first novel,  Love And Friendship, for $1.99.   Not only is it one of the best college-town novels I’ve read, but it is as accomplished as  Mary McCarthy’s satire, The Groves of Academe.  Lurie’s wit is less biting, but she doesn’t spare the absurdity of academic life.   And she  transcends the college town satire with her vivid, believable characters and detailed descriptions of the chilly winter landscape (adultery is often pursued outdoors) and the politics of college life (you must conform socially and stay on the good side of department heads and deans) .

In Love and Friendship, published in 1962, we follow a small group of professors and their wives over the course of an academic year.  The men teach at  Convers College, in the tiny town of Convers, Pennsylvania.

No one came to Convers except to go to school. The local farmers took their onions and tobacco and corn over to Hampton, and bought their clothes and furniture there. They could not afford and did not want the button-down shirts and imported ski sweaters which were sold in the two local men’s shops, or the hand-rubbed chairs displayed by the Convers antique dealers. 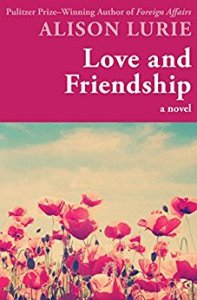 The heroine, Emily Stockwell Turner, a faculty wife and the mother of a small boy, doesn’t mind Convers:  her brothers went to school here, her father is on the board of trustees, and now her husband, Holman, teaches English here.  But she has always felt cheated at being barred from Convers because of her sex.   And we realize that she is still barred from the college because of her sex: the wives have little to do besides volunteer gigs and hobnobbing with each other.

Fortunately, she likes Miranda, a hippieish woman whose husband Jules is decidedly odd, and she spends hours socializing with her while Holman is at work.  Then she meets Miranda’s friend, a philandering music professor, Will Thomas.  Soon Will and Emmy, who is called Emily by Will, are rolling in the hay, or snow, at every opportunity.  Emmy is always giggling, and their frequent sex outdoors makes her think of Lady Chatterley’s Lover.  They are in love, but Will’s definition of love is different from Emmy’s.

Love is not all:  every college has politics.  And, alas, they want a scapegoat.  Miranda’s husband, the strange, intellectual Jules, is brilliant but a nonconformist.  Everyone knows that the college wants to fire him.  But the actual firing  takes a hilarious twist, which I cannot reveal.  This is overall a very charming book, beautifully-written, light and bright.

I hope there will be an e-book sale on Lurie!