I have long been a fan of Evelyn Waugh.  I  giggled over Vile Bodies, his satire on bright young things.  Later I became a devoted fan of his more serious work.  I especially love Brideshead Revisited (I know, some think it very bad and sentimental, but I love it), and the satiric Sword of Honour trilogy, set during World War II, which I wrote about here.

And now I have reread his brilliant novel, Put Out More Flags.  Lo and behold! I think it’s his masterpiece.  In this compelling mix of satire and realism, published in 1942, Waugh writes perceptively about the early years of the war, focusing on the various survival skills, or lack thereof, of a comical cast of upper-class characters.  Waugh resurrected some of the characters from early novels, but this book is a great introduction to them., because Waugh is firing all cylinders and has developed the characters convincingly here.

In the week which preceded the outbreak of World War II–days of surmise and apprehension, which cannot, without irony, be called the last days of peace–and on the Sunday morning when all doubts were finally resolved and misconceptions corrected, three rich women thought first and mainly of Basil Seal. They were his sister, his mother and his mistress. 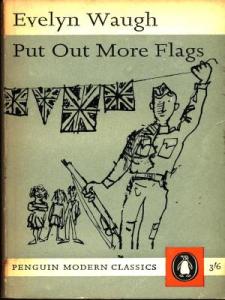 The conniving Basil is a charming ne’er-do-well of whom his aristocratic mother has despaired, because he ruins every opportunity and loses every job she wheedles for him from important friends.  But his loyal sister Barbara insists to her patriotic husband Freddy that  Basil will do well in the war, and her prediction is true:  it’s not that she doesn’t know he’s no good, but she perhaps has a better idea of the brutal nature of war than does Freddy.

Barbara is in charge of billeting evacuees in their village, and a thankless job it is.  She cannot persuade anyone to keep the three Connellys,  the Children from Hell, the oldest a grotesque teenager who routinely falls in love with the man of the house,  and a mischievous younger brother and sister who can wreck a house in 30 seconds.   But Basil finds a way to profit from the very awfulness of the Connolllys:  he collects a fee to take them away from the traumatized homeowners.

Basil’s mother, meanwhile, tries to persuade her friend Sir Joseph to find a place for Basil in the military.   But never mind,  Basil eventually finds a snug little niche for himself in a government agency as a spy.  He simply exaggerates conversations he hears at parties and, if there’s nothing going, makes things up.  He doesn’t think he can do any damage, but he does hurt a friend.  To give him credit, he tries to undo the damage.  Whatever you think of Basil, he is less shallow than he was in his previous incarnation  in Waugh’s Black Mischief.

And then there is Angela, his mistress, hopelessly in love with Basil, and drinking herself to death.  Will anyone be able to help her?  It seems unlikely…and yet, Basil is a different person now.

The characters are so much fun.   Anthony Silk, a gay writer, is very witty;  Alistair and Sonia Trumpington change house frequently and live in cramped quarters, mainly to keep Basil from moving in; and there are countless others.  So many others.  YOU MUST READ THIS BOOK!

The comical thing is that I know someone who was a bit like Basil.  He went to Oxford, too,  and was a bit of a charmer, but also very conniving.  Everything in America was a breeze for him, and he learned to spin straw into gold–that’s all I can say!

THE PLANNED PARENTHOOD BOOK SALE.  Yes, it’s time again.  This year there is a  strong classics section, with Penguins and Oxfords to delight the soul, but we have all those! This year I bought very cheap books–I mean under a dollar!

I found  Niccolo Tucci’s Before My Time, with an introduction by Doris Lessing ($3); Francoise Sagan’s Bonjour Tristesse (80 cents, a bizarre price!); and John Nichols’ The Sterile Cuckoo (60 cents, another strange price).  Did you  see the film of The Sterile Cuckoo, with Liza Minelli?  I’d love to see it again. 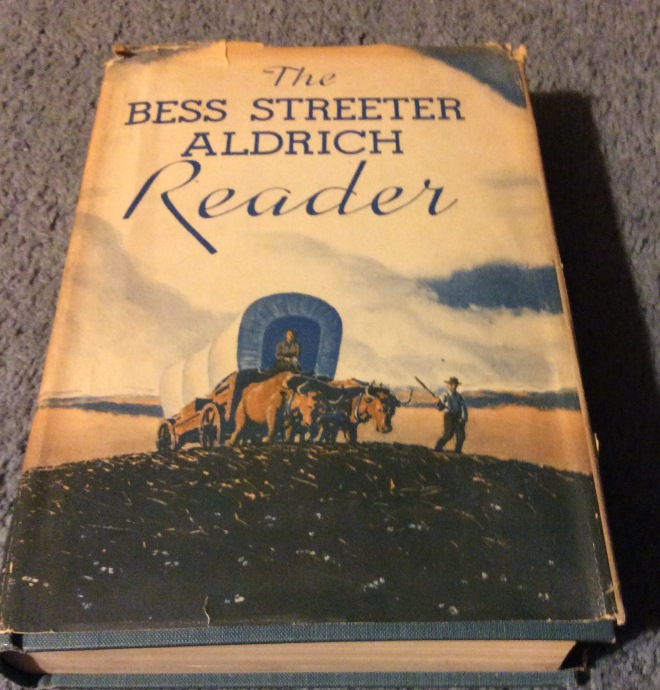 I am such a fan of Bess Streeter Aldrich that I visited her house in Elmwood, Nebraska.  This “reader”edition includes A Lantern in her Hand, Aldrich’s most famous novel, the sequel, A White Bird Flying, and some short stories.  It was 50 cents. 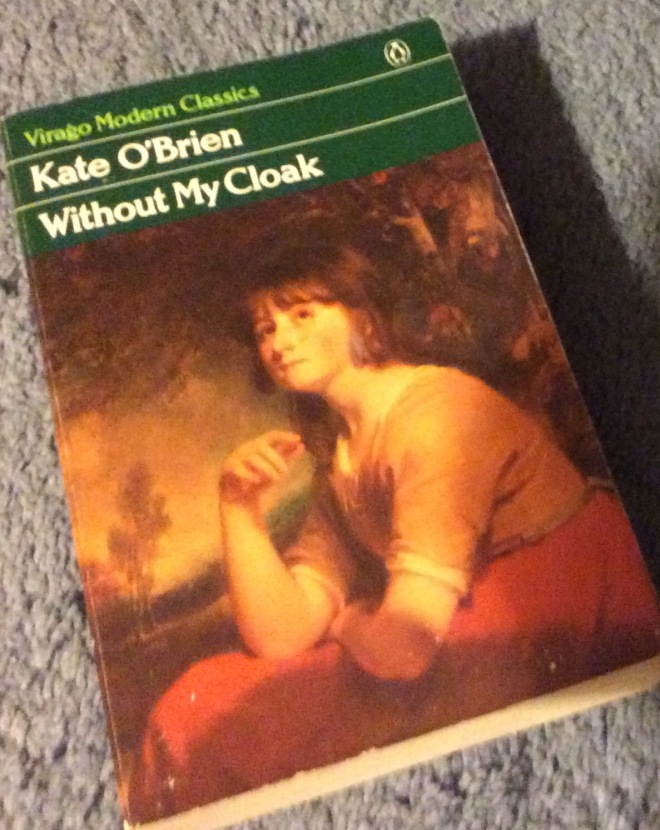 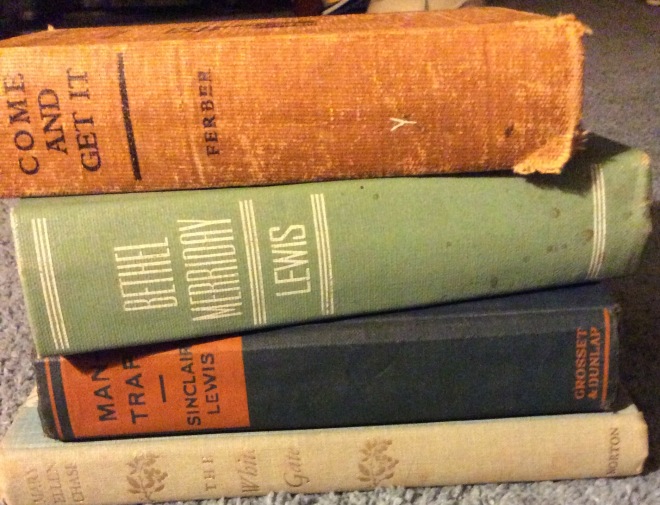 Here are some old books no one wants!  Edna Ferber is the author of So Big (the Pulitzer winner) and Showboat, made into a musical; I’ve never seen Come and Get It.  Then two by Sinclair Lewis, Bethel Merriday and Man Trap; again, I’ve never heard of them.  And then The White Gate, by Mary Ellen Chase, a Maine writer who was popular in the mid-twenetieth century. 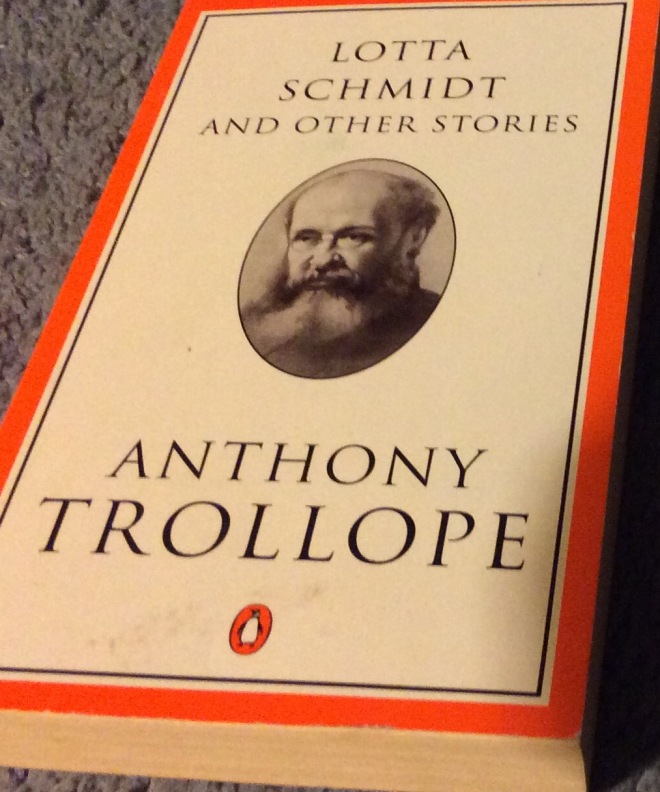 Short stories by Trollope:  how can I go wrong?

Peter De Vries really is the kind of novelist I consider a “cult” writer.  His humor is very silly and goofy, and I know people who love his work; I know others who hate it.  Let’s just say I have to be in the mood.

A good haul.  Perhaps I’ll post about the rest later!