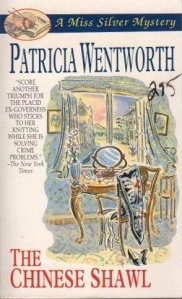 I absolutely love Patricia Wentworth’s Miss Silver mystery series.  Years ago when I took the train from Chicago to New York (you can imagine the length of the journey), I escaped into these well-written mysteries with great pleasure.

If you’re a fan of Agatha Christie’s Miss Marple, you’ll like Miss Silver:  I actually prefer her.  That’s because Wentworth is a deeper writer than Christie. ( Well, I think it’s true, even if you don’t agree.)   For those who don’t know Wentworth’s work, Miss Silver is an ex-governess turned private investigator.  Like Miss Marple, she is always knitting, and seems so innocuous that people trust her.

I recently whiled away a rainy day with The Chinese Shawl, the fifth book in the Miss Silver series, published in 1943.  The best thing about it? It is more than a mystery.  In the first 100 pages (the murder doesn’t take place till page 106), she fascinatingly portrays a group of socialites dominated by a beautiful, cruel actress, Tanis Fane.  Tanis is a man-eater who steals other women’s men,  and then  rejects them.  Yes, she’s a stereotype, but we’ve all known the type. 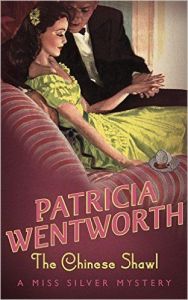 A young man tries to explain Tanis’ character to her country cousin, Laura, who has just turned 21 and come up to London.  Tanis, whom Laura has never met,  has invited her to a party.

“You just wait.  She specializes in other girls’ boyfriends.”

“Not a bit of it–it’s all done with kindness.  I’ve watched her at it for years.  She’s kind to the girl, and she’s kind to the chap, and she goes on being kind to him till the girl gets crowded out, and then after a bit she gets bored and he gets crowded out too.  She doesn’t want any of them for keeps, you know.  She just wants half a dozen of them trailing round, licking her boots and paying for taxis, and ready to cut each others’ throats.  She enjoys that part a lot.”

As you can imagine, Laura is an innocent.   She finds Tanis glamorous.  At the party, one of Tanis’s ex-boyfriends, Carey Desborough, falls in love with Laura at first sight.   But when Tanis sees he wants Laura, she isn’t inclined to let him go.  And things become more complicated when Laura and the others are invited to a house party at The Priory, the Fane family estate, which Laura recently inherited.   Agnes has rented it for years and wants to buy it.  But does Laura want to sell?

From the beginning you know Tanis will be murdered.  It’s that kind of book.  But she has so many enemies.  They’re all suspects, as you can imagine, and Miss Silver figures it out by reading character as well as the clues.  The police officer is one of her ex-charges!

Completely absorbing!  and there are 32 of them in the series. 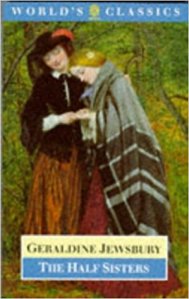 NOT LONG AGO I WROTE ABOUT HOW SILLY I FIND BOOKTUBE.  Well, you will be happy to know that I  found one channel I like,  Books and Things by Katie Lumsden.   And I very much enjoyed her video on “Underrated Victorian Authors,” in which she talks about some of my favorites, like George Gissing and Margaret Oliphant, as well as two I haven’t read, Geraldine Jewsbury and Amy Elizabeth Dilwyn.

In general, I do find Booktube trite, but her “vlog” is enthusiastic and smart.

And do let me know if there are other good Booktube channels, because I have otherwise struck out!