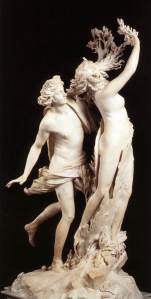 Bernini’s sculpture of Apollo and Daphne

I came of literary age with a close reading of Metamorphoses.  If I had not taken an Ovid class, I would have been a Greek snob forever.  I loved Greek; I still love Greek. I was an avid Greek student. But after studying Latin at the urging of a classics professor, I fell in love with this resonant, elliptical language.

In a seminar room with a clanking radiator, a small group of us translated  Metamorphoses. I had never read a poem so elegant and loopy, fluid and witty.  I spent evenings with Lewis and Short (the dictionary) and Allen and Greenough (the grammar) as I translated Ovid’s myths about nymphs who turned into trees,  beautiful women seduced by Jupiter and transformed into cows, a hunter turned into a stag and killed by his own hounds.

In Ovid’s tragicomic epic poem, Metamorphoses, the  meaning of the transformation is sometimes ambiguous and baffles. One of the most famous is the story of  Daphne and Apollo.  Pursued by Apollo, the nymph Daphne runs away and prays to her father to save her.  Her father transforms her into a tree, but Apollo still claims her as his own:  the laurel tree.  Is this myth about empire? There are many interpretations.

Ovid is my favorite poet.  And so you will not be surprised that I recently enjoyed two books centered on Ovid: Jane Alison’s nonfiction novel, Nine Island, is narrated by a woman who is translating Ovid, and Laurel Fulkerson’s Ovid: A Poet on the Margins, is a scholarly guide to his poetry. 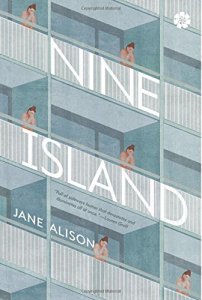 In Alison’s Nine Island, which won the Independent Publishers Award in 2017, J, the narrator, is Jane Alison, or someone like her:  both are translators of Ovid’s Metamorphoses.  J is on deadline:  she has 124 days to finish her book. J writes elliptically, “Sort of translation, but only to start:  am changing his stories around.  I don’t think Ovid of all people would mind.”

J is divorced. A series of futile infertility treatments destroyed her marriage. And so she is having sex with old boyfriends, and trying to meet someone new.  When we first meet her, she is driving back to Miami  after spending a month with a man she calls Sir Gold, the best of her old boyfriends.  Sir Gold told her it was over, to leave.  Now she is alone in her high-rise apartment, with her ancient cat Buster (who wears diapers) and Ovid for company.  She spends much of her time by the pool, alternately swimming and translating.

No, I’ve sailed no seas.  I’ve driven south down I-95, driven south for days, until 95 stopped, and I was back in Miami.

No country for old women.

I’m not old yet, but my heart is sick with old desire, and I’m back in this place of sensual music to see if it’s time to retire from love.

J compares women’s lives to those of Ovid’s women turned into trees.

The spare narrative is exquisite. J’s days are uneventful:  she takes walks under a pink umbrella, makes friends at the pool with an older white-blond woman (her older alter ego?) who swims to numb pain, and visits her mother, who falls and must sell her house. Back in Miami,  the members of the board at J’s condo insist that the pool must  be rebuilt at great expense.  It has to do with shady deals with concrete companies, and the mob is involved.

This is the kind of novel you read for the style and only later realize the depth of character.

I very much enjoyed Alison’s earlier novel about Ovid, An Artist in Love. She is also the author of Change Me:  Stories of Sexual Transformation from Ovid.

Laurel Fulkerson’s Ovid: A Poet on the Margins.  This short book is an excellent guide to Ovid.  Fulkerson sketches his life and emphasizes the ambiguity and paradox in his poetry.  In Metamorphoses, what does it mean that so many gods are rapists?  In a weaving competition with Athena/Minerva, Arachne’s tapestry depicts 21 rapes committed by gods.  Is Ovid just trying to tell us gods are rapists, or is it political?  The poem Ars Amatoria (The Art of Love), a light guide to how to pick up men or women, may have led to his exile from Rome.  According to Ovid in his poem written in exile, Tristia (Sad Things),  he was exiled because of  carmen et error, a poem and an error.  Fulkerson writes, “We never do learn what happened, though many historians and novelists have put together the intriguing hints in a variety of ways, some connecting the relegation to political scheming, some to adultery with imperial women, and some to a combination of the two.”

There is much crammed into this fascinating book, which has only 101 pages–just the right size for an introduction or a review.

4 thoughts on “Ovid in the 21st Century: Jane Alison’s Novel “Nine Island” & Laurel Fulkerson’s “Ovid: A Poet on the Margins””