I found the following entry in my 2010 book journal.  Enjoy! 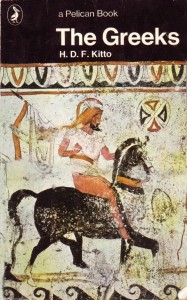 My regimen, now that teaching is over (“No more pencils, no more books, no more students’ dirty looks!”), is to read 200 pages of Greek history a week (for maybe two weeks). Why, I can’t tell you. I’m a language teacher, not a historian.  Classical literature is my passion and, as far as I’m concerned, the reason to read Greek.

But I’ve got my schedule:  a bit of Paul Cartledge’s Ancient Greece: A History of Eleven Cities, followed by a smidgen of H. D. F. Kitto’s The Greeks. These two are good companion volumes:  Cartledge is modern and brisk, concisely attempting to explain the bare necessities; Kitto is more leisurely and fills in the gaps of what you need to know, because Cartledge’s book, for all its brevity, is not very well-organized.

Dear me!  Next thing you know I’ll be reading Edith Hamilton’s The Greek Way.  No, Kitto is actually very good.  This may be one of my favorite books of the year.  I have some scholarly books on reserve at the library and hope one of them will be lucidly-written.  (It’s very tough to find a classicist who can actually write.)

Today I got sidetracked by a box of books on my porch.  Yes, I was lolling on the porch drinking green tea, perusing my Kitto, when a pink book caught my eye–have you noticed how everything is pink these days?–a novel, Raney, by Clyde Edgerton, which came out in 1985 (so the pink was probably not a style indicator).  And, of course, I’m terribly carried away by this Southern small-town novel. Edgerton’s voice reminds me slightly of James Wilcox’s.  That Southern humor is strong.  I can’t resist it.

The heroine, Raney, is a 24-year-old musician, a Baptist, a community college student, a teetotaler, and the daughter of a general store owner.  She is in love with Charles, a sophisticated assistant librarian from Atlanta at the community college, but they have many differences, as becomes clear before their wedding.  She is so upset by his drinking at the wedding rehearsal that she says she will never forget it.  Charles’ propensity for social drinking and serving wine to guests continues to be a major conflict. Raney is a simple soul:  her straightforward, honest, slightly ungrammatical voice is touching and comical.

Although she’s a fervent conservative Baptist, with prejudices against the Episcopal church and Charles’ liberal ideas, she’s very likable, as is her dysfunctional family. But she can’t understand why Charles would drink alcohol at their own wedding.  And she has her reasons.

You would think a man could get married without getting drunk, especially after I explained that nobody in my family drunk alcohol except Uncle Nate, who was in the Navy in World War II, but got burned in combat on over fifty percent of his body, and caught pneumonia and had to be discharged from the Pacific….

Uncle Nate comes to our house in a taxi at any hour of the day or night, drunk, cussing his former wife, who’s dead–Joanne.  And when I say drunk, I mean so drunk he can’t get up the front steps without me and Mama and sometimes the taxi driver helping him…

Raney and Charles have other conflicts:  he is furious when her homey mother visits the house when they are out,  fights with Raney about her naive comments about “blacks” (she has never known a black person), and writes letters to the editor about the dangers of nuclear power plants.  Charles also has his prejudices:  he  dislikes Raney’s simple small-town family, though they include him in family activities, like fishing and camping, and ply him with fried okra and pie .

But their marriage is basically sound, and both parties will learn to accommodate the other.

This charming novel got passed around by my friends in the ’80s  but somehow I never got around to it. In a way it’s nice to have postponed the pleasure.  Now I can look forward to all of Edgerton’s books.

6 thoughts on “The Greeks & Raney”