Death haunts Aldred Leith, the central character of Shirley Hazzard’s The Great Fire, which won the National Book Award in 2003 and the Miles Franklin Award in 2004. In the aftermath of World War II, Aldred, a war hero, travels through China and Japan to document the ruins of Hiroshima and other towns. Explaining to two friends how he got this assignment, Aldred recounts a meeting with a young general in France.

“My paper on Caen had reached his desk. He had informed himself, and knew about my youth in the East, the languages, the war. He’d grown up in China and Indochina, and knew that these places were evaporating, transforming. The last days of all their centuries should be witnessed and recounted by someone who was not a spy, not a sociologist, beholden to no one.” 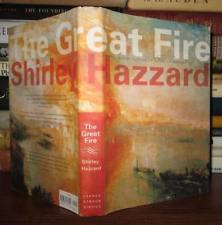 Hazzard, an Australian-American writer, was uniquely qualified to describe the vicissitudes of this lost world, and she does so unsentimentally.  At age 16, she worked for British Intelligence in Hong Kong from 1947 to 1948, monitoring the civil war in China.

Her tough, elliptical prose is most powerful in  its evocation of place. But place means less to Aldred than books, which urgently symbolize the pinnacle of civilization. During his childhood he traveled through Asia with his father, a popular novelist. We first meet  Aldred on a train, studying a book jacket photo of his father. The soldier who meets his train is reading his father’s book. Such literary coincidences are frequent in Hazzard’s novel. Aldred tells two young Australians–Ben and Helen, scholarly siblings who read Carlyle aloud–of his first meeting with his close friend, Peter Exley. “And then, when we first met in Cairo, each of us was carrying the same book.” Helen asks, “What was the book?” (Hazzard never tells us.)

Meanwhile, people are dying. Japan is a shambles.  Within hours of Aldred’s arrival at Kure, an old professor dies in his company. Two days later he stumbles upon the body of a Japanese suicide, a youth he saw verbally abused by Driscoll, the medical officer who is his host and the father of Ben and Helen.  After Aldred retires to his bleak room to write a report of his discovery of the body,17-year-old Helen Driscoll comes to his room with a brandy. And a romance blooms between them, which is Aldred’s salvation from the war.

Hazzard’s shift from her description of the Great Fire (her metaphor for the horrors of war) to romance is disappointing. Much more intriguing are Aldred’s meetings with his friend Peter, a lawyer who is investigating war crimes in China. Speaking about his interviews with former prisoners, Peter says, “No one went to pieces.” But Aldred has a more subversive view. “Well, they did and do, and one has seen it. But it’s like the phenomenon of suicide in all our lives–the wonder is that more don’t commit it.”

Yet romance can happen anywhere, even when one is recovering from war.  Hazzard writes,

Aldred Leith had developed stoicism that might have been a temporary condition of his war, of his task and travels. He knew, however, that the capacity for affection must be kept current if it is not to diminish into postcards. And that responsiveness in youth is no guarantee against later dispassion.

Although Helen is young, she, too, knows death. She spends long hours reading (yes, books again) to her older brother, who is dying of a degenerative disease. The complications of the affair detract from, rather than complement, the ambitious scope of the book. There is a softness at odds with Hazzard’s crystalline prose. But in the end The Great Fire is fiercely effective as a record of post-World War II Asia.

2 thoughts on “The Great Fire by Shirley Hazzard”