Why do I love George Eliot?  It’s strange, isn’t it?  A Midwestern woman reader of the 20th and 21st century avidly reading about Victorian English heroines.

Reading Eliot is satisfying, but rereading her is the ultimate pleasure.  I recently reread her second novel,  The Mill on the Floss:  it was like a psychedelic trip from one reality to another.   Eliot’s effervescent language is so evocative that I saw the landscape, the mill, the river Floss, and the woods.

The first time I read The Mill on the Floss,  the place riveted me.  I transposed our local landscape on Eliot’s, though I had no idea of scale:  I miniaturized our own river, sprawling fields, and wildflower-dotted meadows, because wasn’t England smaller?  Later, I pictured it all as a BBC film (I haven’t seen the Eliot adaptations, so I saw it as  Far from the Madding Crowd). I would love to travel to George Eliot country,  but perhaps it is unnecessary.   Rebecca Mead, author of My Life in Middlemarch, didn’t find her trip to Nuneaton particularly evocative:  Griff House, Eliot’s childhood home, is now a hotel.

But isn’t place especially vivid in Eliot’s books?  I’m afraid that says too much about me!  The first chapter of The Mill on the Floss is devoted to a spectacular description of the setting, St. Ogg’s and its environs.

Even in this leafless time of departing February it is pleasant to look at,–perhaps the chill, damp season adds a charm to the trimly kept, comfortable dwelling-house, as old as the elms and chestnuts that shelter it from the northern blast. The stream is brimful now, and lies high in this little withy plantation, and half drowns the grassy fringe of the croft in front of the house. As I look at the full stream, the vivid grass, the delicate bright-green powder softening the outline of the great trunks and branches that gleam from under the bare purple boughs, I am in love with moistness, and envy the white ducks that are dipping their heads far into the water here among the withes, unmindful of the awkward appearance they make in the drier world above.

So idyllic:  a landscape from the past, already past in a novel published in 1861.  And throughout the book Eliot emphasizes the wildness of the Floss, which ominously swells and frequently floods, which foreshadows the ending.

The landscape is one thing, the characters another, but I intertwined the one with the other, as Eliot intertwines them.  Why do I so identify with Maggie Tulliver, the heroine of The Mill on the Floss?  Is there a kind of imprinting of women’s lives from the past? I  never romped on the banks of a river, but I certainly rooted for Maggie when she pounded nails into her doll’s head in vexation and cut her thick hair after her mother and aunts denigrated it.   But it is the  question of Maggie’s education that especially interests me.

Boys and girls were educated differently.  I wonder if it was this book that persuaded me I wanted a 19th-century gentleman’s education, i.e., classics.  Maggie’s very average (bordering on slow) brother Tom learns Latin and Euclid by rote at a parson’s house, though even her father says Maggie would have benefited more from such studies.  When she visits Tom, she tells him she can help him with Latin.  The dialogue is hilarious.

“You help me, you silly little thing!” said Tom, in such high spirits at this announcement that he quite enjoyed the idea of confounding Maggie by showing her a page of Euclid. “I should like to see you doing one of my lessons! Why, I learn Latin too! Girls never learn such things. They’re too silly.”

“I know what Latin is very well,” said Maggie, confidently, “Latin’s a language. There are Latin words in the Dictionary. There’s bonus, a gift.”

“Well, that’s no reason why it shouldn’t mean ‘gift,'” said Maggie, stoutly. “It may mean several things; almost every word does. There’s ‘lawn,’–it means the grass-plot, as well as the stuff pocket-handkerchiefs are made of.”

Isn’t that amusing, innocent, and realistic?  We read a lot about Tom’s education, but almost nothing about Maggie’s. She goes to a girls’ boarding school with her cousin Lucy, but we hear about it only after she is called home by  her father who has lost all his money in a lawsuit and become very ill.  At home she finds solace in religion and in  her own studies of Latin and algebra, but none of it is  enough. 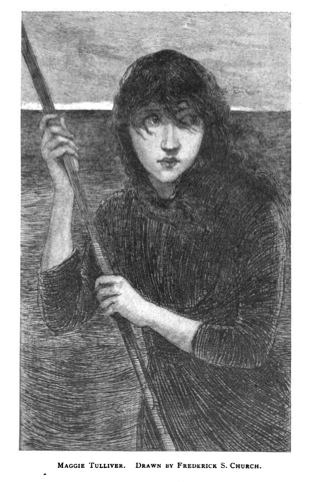 Education was not an issue for me, I used to think, but as I grew older I realized that it was.  I am a feminist, and conscious of discrimination against women, but never believed discrimination happened to me–and this was part of my strength.  In fact the schools in my hometown were very good, and the teachers, mostly women, encouraged me.  I was an excellent student until my parents’ divorce, and then I lost my mojo.  My college-educated mother wanted me to go to college; my uneducated father did not.  Eventually I  wangled jobs, grants, loans, and an assistantship, but it was catch as catch can and good luck.   I could easily have been a Maggie stuck with an unappreciative brother,  or an undereducated Gwendolen Harleth (Daniel Deronda), unable to make a living..  The 20th century was better for women in most ways than the 19th century.    But the 19th century had George Eliot, who could hold her own with the best-educated men of her time, and didn’t she contribute more than most?

Near the end of The Mill in the Floss, sex becomes the major question, and sex and the flooding of the Floss become one and the same.  There are elements of melodrama.  Maggie is courted by two men, Philip, the crippled son of her father’s enemy, and handsome Stephen, a banker’s son, who is engaged to Maggie’s lovely cousin Lucy.  Tom says he will not speak to Maggie if she continues her romance with Philip, whom she would like to marry.  But Stephen and Maggie are wildly attracted to each other, and when they go out in a boat,  Stephen more or less abducts her, taking her farther than they had planned, so they have to spend the night on a commercial boat.  Maggie loses her reputation, though not her virginity, and Tom kicks her out of their home.

Poor Maggie!  We are used to 19th-century novels in which the sexually active woman must die.  Anna Karenina, Madame Bovary, The Awakening… But Maggie doesn’t actually have sex.   And she is horribly punished by death anyway, swept away with her brother Tom in a boat  (yes, another boat!).  Both drown  in the flood.

It all seems unreal and melodramatic–did Maggie and Tom hae to die in a flood?–and what does it have to do with sex?  Yet floods happen and are melodramatic: there have bee n many terrible floods in the Midwest this century, destroying homes, art museums, libraries, downtowns, you name it.

What does the flood in The Mill on the Floss mean symbolically?  In Tim Dolin’s George Eliot, he sums up different theories.  “It has been argued that the flood has the effect of neutralizing the novel’s own commentary, contradicting or negating everything that comes before it and bringing the novel ‘hard up against its own realism’ by indulgently releasing Maggie from the narrow, unjust, oppressive world that social realism has to depict.”

All right.  I’ll accept that–sort of.  Though this is not all he says.  Frankly I need a book of criticism. And so to one of the older libraries we shall have to go one of these days.

8 thoughts on “George Eliot’s The Mill on the Floss: On Landscape, Women’s Education, & Floods”