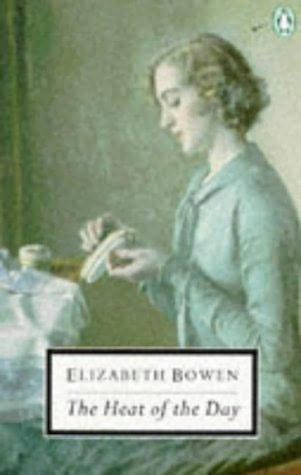 “You might like Elizabeth Bowen,” said a classics professor during a chat about, of all things, the pros and cons of the style of Virginia Woolf.  I had correctly identified a passage by Virginia Woolf, as well as the authors of several other long excerpts from famous books, on a mystifying diagnostic test which had little to do with our subject.  Woolf was then my favorite English writer; he preferred Bowen, who was influenced by Woolf.  Now he is dead, and I prefer Bowen.  The cycle of life…

I recently reread The Heat of the Day, Elizabeth Bowen’s spy novel.  The narrative is oblique and elaborate, and I love her lyrical style, and what the biographer Victoria Glendinning calls her “contortionist manner of sentence construction.”  Glendinning says that Bowen had a difficult time writing this book:  she wrote the first five chapters in 1944, and then rewrote them in 1945 because her reality had changed.  Glendinning writes, “It was thus the very subject of The Heat of the Day–the war–that held up the writing of it; and she did not get around to finishing it until the war was over.”

In this convoluted novel, set during World War II, the middle-aged heroine Stella lives alone in London in a furnished flat while her son Roderick is in the army.  She knows three languages and two or three countries and is “employed in an organization better known as Y.X.D., in secret, exacting, not unimportant work.”  She is approached by Harrison, an English spy who reminds me of Uriah Heep.  He has tried to become her boyfriend: she has rejected him.  She has a lover, Robert.   When Harrison insists on seeing her one last time, he attempts to blackmail her:  he says he has spied on Robert, and claims that Robert is a spy for the enemy.  Harrison says he will not turn him in immediately if she  drops Robert and becomes Harrison’s lover.    Could any situation be more morally repugnant? 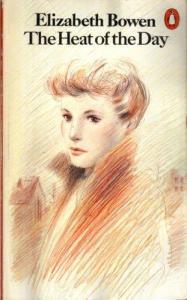 Stella doesn’t know if any of it is true:  is Harrison a spy? Could Robert, who  works at the War Office,  be a spy?  She defends Robert, and sends Harrison away.  She says nothing to Robert, but she becomes nervous and vigilant. What is real?

The narrative is very much a hall of mirrors.  In the beginning of the novel, we see Harrison through the eyes of a young working-class woman who approaches him at an outdoor concert.  She has liked his unconsciousness of everything around him, but her impression changes when he looks at her:  “–one of his eyes either was or behaved as being just perceptively higher than the other.  This lag or inequality of his vision gave her the feeling of being looked at twice–being viewed then checked over again in the same moment.”

And in a scene when we see Stella waiting for Harrison, we also see the obliquity and eeriness of angles.

Propped on the chimney-piece above the built-in electric fire were two photographs, not framed yet–the younger of the two men was Roderick, Stella’s twenty-two-year-old son.  Over the photographs hung a mirror–into which, on hearing Harrison’s footsteps, she looked; not at herself but with the idea of studying, at just one more remove from reality, the door of this room opening behind her, as it must be.  But no, not yet:  he was still knocking into something, putting down his hat in the tiny hall.  This gave her a moment to reconsider–she swung around again, after all, to face him–stood stock still, arms folded, fingers spread over the sleeves of her dark dress.  There came to be something dynamic, as he entered, about her refusal to move at all.

Although it is occasionally melodramatic, I admire this tense, carefully-plotted novel about love and betrayal.  Is it her best?  It is not my favorite.  But she raises complex issues, and the twists and turns are surprising.  The  situation is heartbreaking.  And shouldn’t Hitchcock have made a film of it?

I thought I might have written about other of Bowen’s books at this blog, but I haven’t.  I shall try to do so.  She is a great writer–perhaps out of style these days?

10 thoughts on “Elizabeth Bowen’s The Heat of the Day”