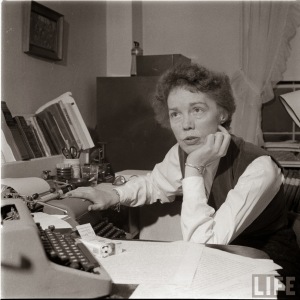 Jean Stafford (1915-1979) , an American writer who won the Pulitzer in 1970 for her Collected Stories, wrote elegant, convoluted fiction  reminiscent of that of Henry James. Born in California, raised and educated in Colorado, the daughter of a writer of Westerns, she met the poet Robert Lowell at a Writers’ Conference, married him, and mingled with New York writers and editors.  (Many of her short stories were published in The New Yorker.)  Her work is bold and resonant:  A refined spinster in Maine reads Virgil’s Georgics aloud, translating as she goes along; an obese philosophy student in Heidelberg eats whole cakes, uses a sucker as a bookmark, and ominously talks about a dead thin twin, who, of course, turns out to be herself; and a young woman undergoes facial reconstruction in a hospital (as did Stafford after Lowell crashed their car into a wall while driving drunk).

Why is Stafford, the female James, as I call her, neglected? NYRB reissued The Mountain Lion a few years ago, but my favorite of her novels is The Catherine Wheel, published in 1951.   Brace yourself: the heroine of The Catherine Wheel is a well-bred spinster, with more than a  dash of Dickens’ Miss Havisham.  And Katharine has a secret:  she is having an affair with her cousin Maeve’s husband, John Shipley, the man she has loved since her teens. And all these years she has been furious that he preferred the insipidity of  Maeve to her brilliance. 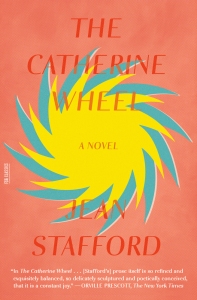 Set during a summer in Maine, this superb book is lyrical and compelling: Katharine spends the summer at the family house in Hawthorne with Maeve’s three children, while Maeve and John travel in Europe. John, a mediocre architect, has assured Katharine that he will leave Maeve at the end of the summer, but Katharine has doubts.  And we learn about the doubts in the form of two intertwined narratives:  one from the perspective of Katharine, frightened of change; the other from that of Andrew, a prep school misfit who had looked forward to the summer playing with his best friend Victor, a village boy who has dropped him to nurse his older brother, Charles, a sailor who has returned to Hawthorne with a mysterious illness.  (I kept thinking gonorrhea, but it is probably typhoid.)

Are you ready for a Staffordian Jamesian passage?

Katharine had endeared herself to the halt and stooping citizenry because not only did she continue to return loyally each year but also intrepidly to withstand the inroads of what Mr. Barker, in spite of his worship of fast automobiles, called “these ultra-modern times.” The customs in Congreve House remained the same that they had been in her father’s day.  She had conceded to electricity, to modern plumbing and the telephone but to no ungainly fads like radios or vacuum cleaners, canned soups or boisterous evenings of The Game…  The servant hall was smaller, the tennis courts had given way to an herb garden, new objects had been introduced into the rooms, but nothing else had changed upon this lordly hill since her father, whom she had idolized, had died.

Katharine and Andrew are engulfed by hatred, fear, and near-madness:  Katharine has wasted years being in love with John and now has her chance; at the same time she realizes that he is not the brilliant man she thought he was when young, that he is having a midlife crisis, and that the affair could destroy his family.  Andrew has no idea about Katharine’s affair with his father, but he is obsessed with fantasizes about killing Charles to get his friend, Victor, back.  And he is terrified of the fantasies.  No one is aware of what is going on with Katharine or Andrew.

I admire this novel very much.  Are there flaws? Yes.  Perhaps the spinster sensibility of Katharine goes too far, though I only noticed this on a second reading.   I happen to like literary spinsters, so it didn’t bother me–much.  And Stafford is  a brilliant writer.

I enjoyed this hugely, though I prefer her short stories.

6 thoughts on “A Forgotten Near-Classic: Jean Stafford’s The Catherine Wheel”