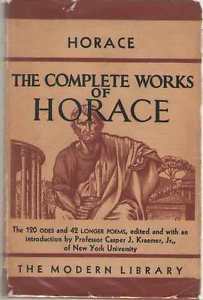 Why do we think poets are mad, wild, and disheveled?

Did it begin with Horace?  I have been reading Horace’s  Ars Poetica (The Art of Poetry), a  witty guide to the history and composition of classical poetry.  A little more than halfway through this charming didactic poem, Horace mocks unkempt Roman poets who affect madness. Horace’s hexameters are labyrinthine and his expression of thoughts so interwoven with abstruse ancient culture that English translations are unclear without notes:   if you don’t read the Latin, good luck to you.   Here is my rough, mostly literal prose translation of this passage, with notes in parentheses.

Because Democritus [“the laughing philosopher”]  believed  talent was a luckier advantage than [knowing] the wretched art, and excluded sane poets from Helicon [a mountain sacred to the Muses], most poets do not bother to cut their fingernails, nor their beards; they seek seclusion and avoid the baths.  For a man will obtain the esteem and name of poet if he never entrusts his head– which couldn’t be cured of insanity in the three Antyricas (three towns where hellebore, used to treat insanity, was grown]–to a barber.

This satiric passage seems very modern. Certainly we have met our share of disheveled poets at poetry readings, though I mostly see professor poets these days. Some modern translations of this passage, however, make it more difficult than it already is.   In Smith Palmer Bovie’s 1959 translation, he substitutes Swiss psychiatrists  for the three Antyricas towns where  hellebore grows.  He writes,

For surely the name
And the fame of the poet will attach itself to that dome
Which has never entrusted itself to the shears of Licinus,
Which trips for treatment three times as many
psychiatrists
As even Swiss harbors have failed to set straight.

Bovie’s translation is clever but too coy for my taste. Swiss psychiatrists in a Roman poem composed in the first century B.C.?  I  finally remembered “dome” used to be slang for “head.”  But it was only after I read the Latin that I realized Bovie was trying to update the Latin passage  for a 20th-century audience.

Are modern poets mad?  Certainly  many have had depression or manic-depressive illness (bipolar disorder):   Edgar Allen Poe, Edna St. Vincent Millay, Ezra Pound,  Robert Lowell,  Sylvia Plath, Anne Sexton, to mention a few.    Some believe madness is part of creativity. Personally, I think it must have hindered their work.  Think of how brilliant they would have been without that pain.

Who are your favorite mad poets?  And what is your theory?   Does madness enhance or obstruct creativity?