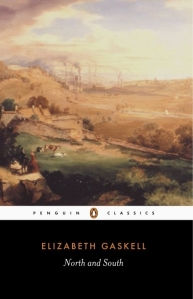 After you’ve read Charlotte Brontë’s Jane Eyre and Emily Brontë’s Wuthering Heights, whom do you read?   Well, the obvious answer is Anne Brontë, and there has been an Anne boom in recent years.  May I admit I’ve never admired Anne?

I prefer Elizabeth Gaskell, who is as earnest and intelligent as Charlotte if not as exotic as Emily. I recently reread her North and South, one of the great industrial novels of the 19th century; it is clearly influenced by Charlotte’s industrial novel, Shirley (which I posted about here).  Both novels are page-turners, written by women of conscience.  Earnest industrial politics, plus everybody falls in love with a mill owner!

Before I make a few comments about the romantic relationship in North and South, here’s the plot summary  via the book description:

North and South tells the story of Margaret Hale, a southerner newly settled in the northern industrial town of Milton, whose ready sympathy with the discontented millworkers sits uneasily with her growing attraction to the charismatic mill owner, John Thornton. The novel poses fundamental questions about the nature of social authority and obedience, ranging from religious crises of conscience to the ethics of naval mutiny and industrial action. Margaret’s internal conflicts mirror the turbulence that she sees all around her. This revised and expanded edition sets the novel in the context of Victorian social and medical debate and explores Gaskell’s subtle representations of sexual passion and communal strife.

Here’s why fans of Charlotte Bronte should read North and South.   It’s not just the industrial politics: it’s the relationship between beautiful, earnest Margaret Hale, the daughter of a minister who has lost his faith, resigned from the church, and moved his family to the industrial town of Milton, and earnest, sexy Mr. Thornton, the owner of a cotton mill. The tension between reluctant Margaret and wary Mr. Thornton recalls the sparring between Jane Eyre and Mr. Rochester, with a dash of Jane Austen’s Pride and Prejudice.  And the name Mr. Thornton alone evokes Mr. Rochester, who lived at Thornfield Hall.

Adjustment to life in smoky Milton is arduous for the Hales. But Margaret befriends and is charitable to some of the workers, as a basket-bearing former minister’s daughter should.  She is, however, contemptuous of “men in trade,” as she characterizes Mr. Thornton, a mill owner who is a classics student of her father’s.  Neither she nor Mr. Thornton sees the other’s point of view: she insists (rightly) on the workers’ need for higher wages, but he explains (also rightly) that new economic demands make it impossible to raise wages now.  Then during a strike, when Margaret throws herself in front of him to prevent his being hit by a rock and is hit instead,  Mr. Thornton falls in love with her.  When he proposes the next day, she is furious and says his way of speaking shocks her, and “is blasphemous.”  Granted, she has already turned down one unwelcome marriage proposal, but her treatment of Mr. Thornton is outrageous.

“And the gentleman thus rescued is forbidden the relief of thanks!” he broke in contemptuously. “I am a man. I claim the right of expressing my feelings.”

“And I yielded to the right; simply saying that you gave me pain by insisting upon it,” she replied, proudly. “But you seem to have imagined, that I was not merely guided by womanly instinct, but”—and here the passionate tears (kept down for long—struggled with vehemently) came up into her eyes, and choked her voice—“ but that I was prompted by some particular feeling for you—you! Why, there was not a man—not a poor desperate man in all that crowd—for whom I had not more sympathy—for whom I should not have done what little I could more heartily.”

What a couple!  But North meets South, and eventually each educates and alters the thinking of the other.  And Gaskell also provides a fascinating look at Victorian factories and of communication between workers and owners.

14 thoughts on “Love in the Cotton Mills: Elizabeth Gaskell’s “North and South””