Either the sparkling Jane Austen or the cynical Juvenal could have said the following:  “It is difficult not to write satire.”  The  Roman satirist Juvenal wrote it ( Satire I):   difficile est saturam non scribere. And yet the 19th-century English novelist and second-century Roman satirist have something in common–the wickedest tongues in their respective languages. 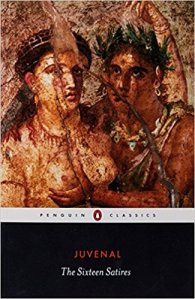 Their spheres of expertise are very different: Austen writes novels about women’s lives, satirizing the tedium of domesticity and the trials of marrying off women in restricted class-appropriate circles; while Juvenal, having survived Domitian’s reign of terror, lampoons the decline of morals and Roman decadence, daring to name  only dead men as examples.  Austen delves subtly beneath the surface, so that sometimes it takes a second or third reading to catch the subversiveness.

Whom do I prefer?  Sometimes one, sometimes the other.  As on a small sketchpad, Austen delineates women’s social lives, their walks and conversations; as in a painting by Bosch, Juvenal derides a colorful cast of Romans, among them women who poison husbands, gamblers who leave their purses but drag a safe instead to the gaming table, and gluttons who eat a whole boar and then die in the bath with an undigested peacock in their stomach.

The form of the satire in dactylic hexameter allows Juvenal occasionally to generalize at the end of a long catalogue of vices. Here is such a generalization in my rough translation: “There will be nothing worse that Posterity can add to our corruption; our descendants will do the same and crave the same depravity; and every vice has stood on the precipice.” (N.B. “… vice can go no further.)

Do you think of Austen as a satirist balanced on a precipice, shifting between a pretense of ladylike reserve and a pointed calculation of “outrageous fortune”(s)?  When I read Emma for the first time, I deemed it a  satire of love and finance. But Austen is more subtle than that: she has a satiric side, and a moral side, and no one better understands than she the serpentine relationship between love and money, and the cryptic  conventions that form the bond between men and women.  Her heroines want to marry, and,  yes, they get their men, but what men!  Handsome, clever, and rich Emma must eat humble pie before her snobbish, hypercritical, much older neighbor, Mr. Knightley, proposes. In Helena Kelly’s Jane Austen, The Radical, she does not dismiss the possibility that Mr. Knightley, who has a passion for “enclosure” of land, wants to marry Emma partly “for all those extra acres, fenced and ditched for free, and the £30,000 besides.”  And certainly I have always thought that their marriage would be made in hell.

Money matters in Austen’s world.   In her first novel, Sense and Sensibility,  Austen begins by describing the financial difficulties of the Dashwoods.  The Dashwood sisters and their mother must leave their comfortable home, because their father managed his finances badly and their half-brother inherited the estate. Now they depend on the kindness of a distant relative, who allows them to live in a cottage on his estate.

Whom will the girls marry?  It is more urgent than ever, now that they are poor.  Elinor assumes her boyfriend Edward Ferrars will propose, but when he does not even visit, she is unable to parse the world of men.  Ferrars has lied to her, a very important lie, we learn.  And how sensible is Elinor, even though she is more sensible than most? Like other girls, she has not been educated in finance, nor does she have any control over money, and could not have suspected any deception because of it.

Like Elinor, Marianne is unable to parse the thinking of men.  When she twists her ankle while running blithely down a hill, a typical Marianne-ish entertainment, a handsome stranger named Willoughby carries her home.  They fall in love:  they love art, novels, poetry..  They have many common tastes.  Unfortunately Willoughby drops her after paying her very marked attentions.

Marianne is a strong character, but she makes herself sick with sensibility and languishes with a real illness after she takes a walk in the rain, mourning Willoughby.   In Lucy Worsley’s witty biography, Jane Austen at Home, she explains the disease of “sensibility”  that afflicts Marianne.  Worsley writes,

Known as The English Malady, ‘sensibility’ had by the middle of the eighteenth century become a fashionable affliction for the well off. It was a classy kind of problem from which to suffer, for your nerves only became dangerously ‘sensitive’ if you had plenty of leisure time, and therefore lots of money, to indulge them.  But if you did want to appear delicate, full of sensibility, refined, it was a good idea to start by reading novels. And as people started to read more novels, with their high-blown, elevated notions about love and romance, they actually began to write to their  own real-life lovers in the same sensitive, romantic terms.

But Helena Kelly, author of Jane Austen, The Secret Radical, interprets sensibility differently.  Depending on whether Austen wrote Sense and Sensibility in the late 18th century or early 19th centurey,  Austen may have been alluding to Wollstonecraft’s The Vindication of the Rights of Women. Wollstonecraft writes that men’s  power is “reason,” while women’s only power is “sensiblity,”  i.e., having the accomplishments that help her attract men and marry.

I lament that women are systematically degraded by receiving the trivial attentions, which men think it manly to pay to the sex, when, in fact, they are insultingly supporting their own superiority. It is not condescension to bow to an interior. So ludicrous, in fact, do these ceremonies appear to me, that I scarcely am able to govern my muscles, when I see a man start with eager, and serious solicitude to lift a handkerchief, or shut a door, when the ladycould have done it herself, had she only moved a pace or two.

Reading Wollstonecraft, I am surprised to recognize that her words still apply. Think of the difference between professional training (business, law) and the liberal arts (languages, literature, the arts). I so value the  liberal arts that I will make a case for sensibility over sense, but I admit our sensibility  prepared us mostly for (women’s?) lower-tier income jobs, teaching, paralegal work, PR,  or freelance writing. I omitted my master’s degree from a few job applications, after learning that  men with bachelor’s degrees weren’t at all interested in hiring women with more education.   I wonder where women are today on the “sensibility” question?  Surely more are in the professions.  I prefer sensibility, but sense–and cents–also matter.

And yet without sensibility are we human? One wonders when one sees people walking up and down the street looking at their phones, doubtless asking Alexa/Siri for directions.

7 thoughts on “Jane Austen and Juvenal: It Is Difficult Not to Write Satire”