In the introduction to the 1898 edition of Honoré de Balzac’s novel Letters of Two Brides, the critic George Saintsbury assures us it is not the best of Balzac.

It is far, far from his best.  Nonetheless, it has been reissued by NYRB,  in a new translation by Jordan Stump, under the title The Memoirs of Two Young Wives.  After reading a sample online of the new translation, which didn’t seem very different from my 1898 copy (translated by R. S. Scott), I stuck with the old:  and  chips of paper littered the floor as I cut the pages.  And that’s a reason to read the new!

Written in the form of letters between two best friends, this slight epistolary novel explores women’s attitudes toward marriage.  Two women of very different social strata went to convent school together.  Louise, intended by her aristocratic family to be a nun, is rescued from the convent by her Carmelite aunt’s knowledge that Louise is “in a decline.” Once she is home in Paris, her mother dolls her up in splendid clothes, she thrives at social events, and she is a belle. But Louise falls in love with her Spanish tutor, who turns out to be a former duc (exiled) but is still, I think, a count–or maybe the opposite–and let me say this romanticism is completely unlike Balazc.

I find Renee more sympathetic than Louise, because there’s none of this hanging from the balcony/hiding in a tree business–that’s what Louise and her lover (later her husband) go in for.  On the other hand, Renee’s family always intended her to marry. Once home in the country, she agrees to marry a traumatized war veteran, former prisoner-of-war, and landowner.  She doesn’t love him, but she wants a family.  And, though I’m surprised by this, her practicality is much more sympathetic than Louise’s drama.

Eventually, I became intrigued–especially by Renee, who is a philosopher.  And the two brides are so different that they bicker back and forth:  Louise tells Renee her marriage to the tutor is one long passion fest, and she pities Renee for not being in love. (Louise later has a second passionate marriage).  Renee tells Louise that she can’t expect the madly-in-love thing to last forever and needs to think about what will last.  Guess who wins in the end? 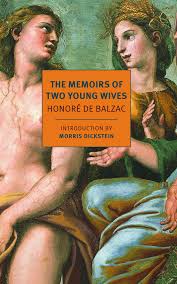 This book is very slight, and actually a bit gushy as well as romantic.   I am baffled as to why it was reissued.   Saintsbury, who writes the introduction to the 1898 translation,  doesn’t admire it either:  he thinks French writers don’t know how to write about women.   I simply thought it was a lesser work of Balzac.

If I were to reissue one of Balzac’s out-of-print novels about women, I would choose A Daughter of Eve, an entertaining novella in which a megalomaniac journalist exploits the infatuation of a countess and his mistress-actress to found a newspaper.  It is published in the same edition (1898 Gebbie Publishing Company) as Letters of Two Brides. After panning Letters of two Brides, Saintsbury writes, “There are, however,… considrable condolences and consolations in “Une Fille d’Eve.”   I agree.

A Daughter of Eve is engaging, if slight, and I thoroughly enjoyed it.  Two virtuous sisters who have led a sheltered life grow up in total innocence and are shocked when it comes time to marry.  Marie Eugenie marries a rich banker, Mr. Nucinigen, and Marie-Angelique marries a count. They thrive for a number of years–it’s better than living alone– until one day, after years of virtuous marriage,  Countess Marie de Vandenesse  takes a lover, the journalist Raoul Nathan.  And this becomes a problem, because soon everybody, especially Nathan, will need money.  Will the rich lose all their money?

I’ve never met a novel I didn’t like in Balzac’s La Comédie Humaine (The Human Comedy), a series of  approximately 95 novels and stories.  But Letters of Two Brides/The Memoirs of Two Young Wives is not especially memorable, so I would skip right to A Daughter of Eve.