Do you love shopping?  Have you ever bought a $2,900 handbag after watching The Devil Wears Prada? Or spent $300 on a Folio Society limited edition ? (Yes, the latter.)

Mind you, you don’t have to suffer from manic-depressive illness to have Memorably Manic moments.  We apply the MMM phrase to any $250-plus purchase that is not a computer or a washing machine.

My Memorably Manic moment occurred in 2014 when I ordered the Folio Society edition of the complete text of Trollope’s The Duke’s Children.  In my defense, I am a Trollope fan.  But you may wonder:   How could I afford it?  Did I take to the streets and sell my prescription thyroid drugs?  (No! I went without new clothes.)

I am a fan of paperbacks, which are compact, flexible, and suitable for reading in the horizontal position.  But I was mesmerized by an article in The Guardian about the publication of the complete text of The Duke’s Children.  Steven Annick, an American Trollope scholar, had restored the complete text from the manuscript at Yale.  When Trollope’s sales were waning, his editor, Charles Dickens, Jr., had required Trollope to cut 65,000 words.

Annick put them back.

And so I ordered the limited edition– an enormous leather object.

Oh, dear, it was lovely, but unwieldy.  I usually read in the horizontal position, and that was impossible.  So I gave the oversized  book to a charity sale.

Was the FS limited edition a one-off?  No, because I have bought used editions of FS books at reasonable prices.  I don’t care for the REALLY oversized FS books, but I love my used set of  Evelyn Waugh’s Sword of Honour trilogy . 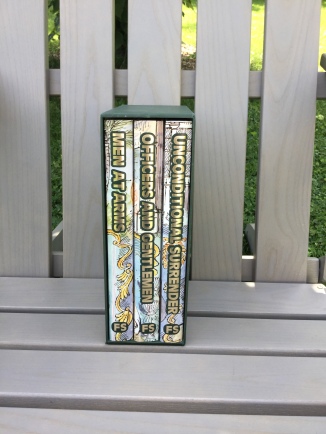 WHAT AM I READING NOW?  I am loving Robert Graves’s historical novel, Count Belisarius, a brilliant retelling of the story of Belisarius, who was a Byzantine general  in the sixth century under the rule of Justinian. If you are a fan of Graves’s dazzling  I, Claudius, you will love Count Belisarius (why isn’t it a BBC series?).  Belisarius, known as the Last Roman because of his courage and integrity (what the Romans would call virtus), was loyal to Justinian, despite his taking credit for Belisarius’s victories. 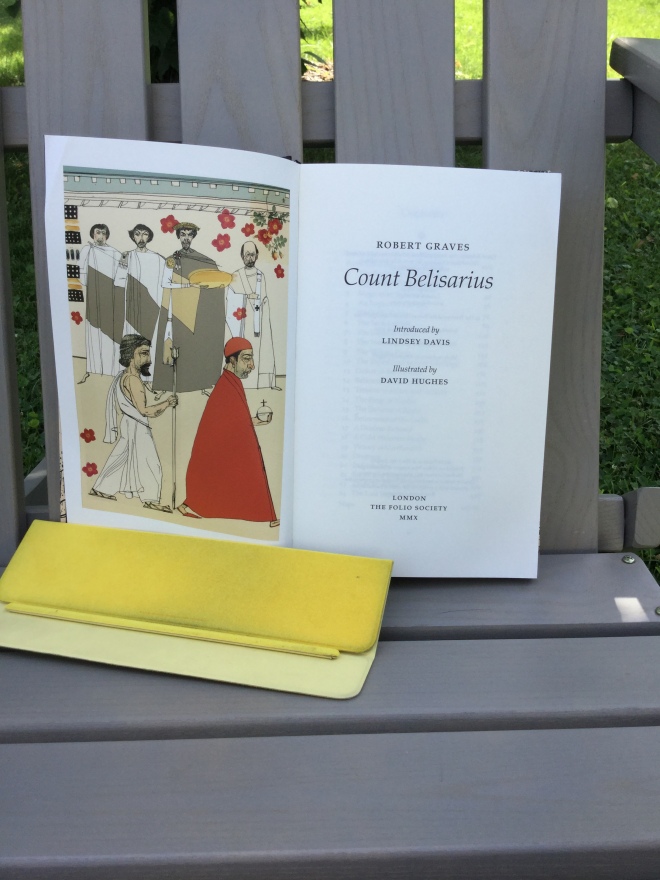 Graves is sympathetic to Belisarius. He intended to write the book from the point-of-view of Antonina, Belisarius’s wife, but at the suggestion of his girlfriend, the poet Laura Riding, changed the perspective to that of Eugenius, Antonina’s eunuch slave. Lindsey Davis, who wrote the introduction to the Folio Society edition, finds this decision disappointing.  But she points out that the trusted domestic servant has been the model for later narrators of historical novels (think Robert Harris’s Cicero trilogy, narrated by Cicero’s secretary).   Davis writes,

Use of such a figure has since become standard practice where men of letters write their novels about famous fellows from history.  It can have the advantage that as part of the hero’s household, the narrator supplies private insights, though we get no pillow talk from Eugenius.  Graves fits him out with an appealing background (he is the son of a British king, captured by Saxon pirates) and he is no cipher, because from time to time he assists his mistress Antonina with her schemes, not least helping to dethrone a pope.

Theodora and Antonina, childhood friends and the powers behind the throne, are by far the most interesting characters. But Graves is such a master of plot and characterization that there are no stick figures:  Belisarius, noble and courageous from boyhood, is commanding and believable.  As a boy, during a dinner at his uncle’s, Belisarius speaks eloquently of what it means to be Roman.

“‘Roman’ is a name borne by hundreds of thousands who have never seen the City of Rome and never will; and so it was, I believe,in the greatest days of the Empire.  To be Roman is to belong not to Rome, a city in Italy, but to the world.  The Roman legionaries who perished with Valens were Gauls and Spaniards and Britons and Dalmatians and many other sorts; of true-born Romans among them there cannot have been many hundreds….  Now, suppose that one could combine Hun archer and Gothic lancer and civilize him as a Roman, and put him under camp discipline–that, I think, would be to breed a soldier as near perfection as possible.  I intend to command such troops someday.”

Don’t fear being bored by soldiers: Graves’s war scenes are vivid and suspenseful.   If, as a Latin student, you fell in love with Julius Caesar’s Gallic Wars (for the gorgeous prose!), and Livy’s history (also gorgeous prose!) and even admired Belisarius’s enemy, the Greek historian Procopius, you will appreciate Graves’s facility in describing battles:  it is part of a long narrative tradition.   Trained in rhetoric,  Belisarius delivers speeches worthy of Cicero, especially when preventing mutiny, or cementing the plan for recapturing Carthage from the Vandals.

There is much to muse about in Grave’s intelligent chronicle of Justinian’s age, which he describes in the preface as  the overlapping of the Classical Age with the Romantic Age of medieval legend.