This summer I am immersed in the eternal ’20s and ’30s of P. G. Wodehouse’s Blandings series.  Some prefer his Jeeves books, but I am enchanted by the characters at Blandings Castle. There is the dotty Lord Emsworth, who owns a prize pig, the Empress of Blandings; his bossy sister Lady Constance, who often thwarts young love; their brother Galahad, who spent his youth cavorting at the Pelicans Club; and we cannot forget the many star-crossed lovers and the many, many imposters lurking at Blandings Castle.  In one of the novels, Summer Lightning, their love-struck nephew Ronnie steals the Empress so he can then “find” the pig  and ingratiate himself with Lord Emsworth, his trustee.  But then the pig is stolen again.  And can the butler Beach fix everything? 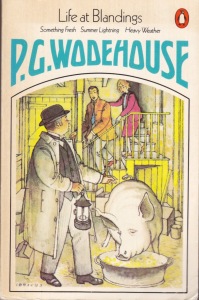 And so, in the midst of comedy, you can imagine my chagrin when I almost lost a Blandings omnibus!

The sun was shining after days of rain, and I was riding my bike to a bench where I planned to read Wodehouse’s Summer Lightning, one of the three novels in the Blandings omnibus, Life at Blandings.  But I jolted over a bumpy section of asphalt trail, and alas! I had a flat tire.

There is only one way to fix a flat, and that is to have someone else do it.  I tried once to follow the directions in Anybody’s Bike Book.  Disaster!  (Even Carrie in Homeland takes her flat tire off the bike and puts it in the trunk of her car, I assume to take it to the bike shop.) Now my husband fixes flat tires. But first I had to wheel my bike back to civilization, chain the bike to something, and then find a pay phone and call him to rescue and retrieve.

Finally I made it to a park, chained the bike to a picket fence, and then cut across the mud back to the trail.  There was a big puddle, but who cared?  Alas, it was mostly mud, and I went flying and so did my Skoob bag with the Wodehouse book!

Well, the  bag was pretty much totaled, but the book was only a bit damp.  And as I waited for my husband, I was grateful for Wodehouse’s Summer Lightning, because there is nothing duller than sitting in the middle of nowhere with nothing to do.  Lady Connie and the Duke of Dunstable were plotting to steal Galahad’s memoirs, because they wanted to repress certain episodes…

I can’t recommend Wodehouse too highly.

6 thoughts on “Mud and the Magnum Opus: In Which a Blandings Novel Gets Wet”