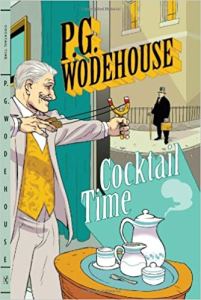 This summer I’ve written about effervescent classics by P. G. Wodehouse, Elizabeth von Arnim, and Patricia Moyes.  Where, you may wonder, are my rants on modern mores? Where my extravagant enthusings about Ovid’s epic? Well, the daily news is so dreadful that I now focus strictly on the light and whimsical. After skimming The New York Times, I want to quaff a Wodehouse cocktail, drink a von Arnim cup of coffee, or sip a liqueur at a 1960s party in a Moyes mystery.

Mind you, I haven’t abandoned the traditional classics. I am currently devouring (or quaffing) an 800-page Victorian novel by Anthony Trollope.

I am a mad Trollope fan.  He is, I always say, the greatest Victorian writer for non-intellectuals . He is not a master of rhetoric like Dickens, nor is he a an elegant stylist like Eliot, but he is consistently solid and intelligent. His understanding of politics, psychology, and finance is curiously modern. The best of his well-plotted novels never go out-of-date.

I am loving Trollope’s Orley Farm, a neglected novel about a lawsuit against a fascinating widow, Lady Mason, who was cleared of the charge of forging a codicil to her husband’s will 20 years ago.  She won the case, and her son Lucius, then a baby, inherited Orley Farm. Now the case has been reopened, and Lady Mason’s 60-year-old lawyer, who is half in love with her, realizes she is guilty, though he won’t admit it.  Her 70-year-old neighbor, Sir Peregrine Orme, is so outraged by the accusations and convinced of her innocence that he proposes marriage to her, hoping his own name will protect her.  Ironically, it is her Oxford-educated son, Lucius, the beneficiary of the forged codicil,  who caused the reopening of the case by revoking the tenancy of two fields long rented by Mr. Dockwrath, a lawyer.  Furious,  Mr Dockwrath reviews the legal papers in the case and digs up new evidence to get revenge.   And Mr. Mason, Sir Joseph Mason’s son by his first marriage, is eager to dislodge Lady Mason.

Orley Farm is Trollope’s Bleak House, and in a way Lady Mason is Trollope’s Lady Dedlock, though Lady Dedlock’s sin is that of having a baby out of wedlock, while Mason committed a financial crime.  Although we readers do not approve of Lady Mason’s actions, she is mostly a sympathetic character, and complex in a way that those on the right side of the law are not.  Trollope realistically describes her weariness, depression, fearfulness, and remorse, as well as her failure to act in any way that might hurt her son.  But there is a huge cast of characters, and love and marriage as well as money are at the center.

The novel is brilliant, if you can get past the first 30 rambling pages.  Trollope has a problem with beginnings, and I was dismayed by this one. But then he gets a grip, and suddenly his prose smoothes out and he fascinates us with his distinctive character portraits.   Doctor Thorne, one of my other favorites, also suffers from Bad Beginning Syndrome.

Although I know there are many, many Trollope fans out there, because we all went a little crazy during the bicentenary in 2015, we all have our own favorite Victorian writers.  Who is yours?

18 thoughts on “Classics for Non-Intellectuals: Who Is Your Favorite Victorian Writer?”