Anthony Trollope’s  He Knew He Was Right is my favorite novel at the moment, simply because I know it less well than my two other favorites, War and Peace and Villette.  And I consider He Knew He Was Right even greater than The Way We Live Now, which is often cited as Trollope’s greatest (see Robert McCrum at the Guardian and John Lanchester at NPR).  I almost wonder is there is a man/woman split on these two classics:  The Way We Live Now is about finance; He Knew He Was Right focuses on marriage.  Mind you, I love both novels almost equally.  But I am fascinated by Trollope’s views on the making and disintegration of engagements and marriages In He Knew It Was Right.

In this brilliant novel, the marriage plot is at its thickest.  Can two obstinate people have a happy marriage? A seemingly well-suited couple, Louis Trevelyan, a wealthy Englishman, and Emily Rowley, the daughter of Sir Marmaduke Rowley, the governor of the Mandarin Islands, have fallen in love and are engaged to be married.  Emily’s mother, Lady Rowley, observes that Louis has one fault:  he likes to have his own way.

“But his way is such a good way,” said Sir Marmaduke. “He will be such a good guide for the girls!”

“But Emily likes her way too,” said Lady Rowley.

And that is the crux of the novel.  What happens when a strong-willed couple disagree and will not see each other’s point-of-view?

The marriage between Louis and Emily is all billing and cooing at first:  they live in an extravagant house in London, and  Emily’s charming sister Nora lives with them because the Trevelyans can help her make a good match, i.e., with a rich man.   Louis and Emily have a little boy who is the apple of their eye.

Suddenly everything changes.  Louis becomes pathologically jealous of the frequent visits of Colonel Osborne, a flirtatious 50ish man who is one of Emily’s father’s oldest friends, as she frequently points out.  Emily does think she views the Colonel as a father figure, and he is much too old to be attractive to a woman in her twenties.  But she is oblivious of the fact that Colonel Osborne glories in mischief.  He caused a rift between another couple, as Louis’s friend Lady Millborough warns him, and the jealous husband took his wife to Naples to get away from him.  She asks, Couldn’t Louis just take Emily to Naples?  When Louis decides he and Emily must separate, Lady Millborough is appalled.  She tries to talk to Emily, but the talk of obedience to her husband does not go over well. Emily says, “And I will obey Mr. Trevelyan–in anything reasonable,”

Louis, Colonel Osborne, and Emily in the park.

Why is Emily so hard to empathize with?  She is right, and her husband is wrong.  But in the beginning, she carries things so very far.  Louis is tormented with jealousy, but she does nothing to assuage it.  Even Nora tells her to take a step back, but Emily fusses, argues, and continues to be defiant, writing notes to the Colonel, in which she implies that her husband is being unreasonable.  It drives Louis crazy–literally.

And so the couple separate.  Their friend Hugh Stanbury (eventually Nora’s suitor) arranges for them to live with his mother and his strong-willed spinster sister, Priscilla, in a nice biggish house in a village.  Even here Colonel Osborne cannot leave Emily alone.   He enjoys his mischievous flirtation and pays her a visit.  There is much gossip in the village after Emily “receives” him, and even Nora is not sure that he should have visited.  And the  mad Louis, who has hired a detective to keep an eye on her, becomes, if possible, even madder on the point of Emily’s “sins” when he learns of the visit.  And Priscilla tells Hugh that things have gone too far, what with the Colonel and the detective and the gossip, and that it is not right for them to continue to live with Emily and Nora. 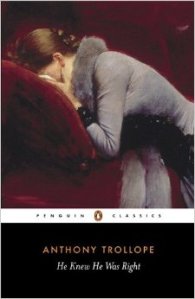 My inner spinster is almost, if not quite, in agreement with Priscilla.  On the one hand, I love Nora (if not Emily), and want them to have a home.  I also want Priscilla and her mother to have a nice home:  before they lived in a tiny cottage.  But all the women are (rightfully) uncomfortable about the Colonel’s visit.  Only Emily seems not to notice his transgressions.

Emily has a strong moral code, and as a feminist I agree that she should be able to see anyone she wants.  But in a marriage compromises are made, and where there is jealousy someone usually has to bend.  Couples do break up due to jealousy, but not over a father’s friend!  Colonel Osborne is not worth it.

I do not empathize with Louis Trevelyan, and do not mean to indicate that I do.  But Emily is only sympathetic as a mother:  her insane husband’s kidnapping of their child is one of the cruellest acts in the history of fiction.  One question that is never quite answered is whether Louis’s madness could have been prevented, or whether the mad jealousy would have manifest itself later with someone else.  Trollope seems to have regarded the jealousy as inevitable.  I am not sure.

This is a rich novel, with a large cast of characters, most more sympathetic than the Trevelyans, and all at the center of a web of engagements (some broken) and marriages (that we hope will be happy).  And he is an unusually effective writer. It drives me crazy when people say Trollope’s style is flat. It is simple, unembellished, and seems more modern than that of most 19th-century writers.