My husband caught a cold at the office.  I blame it on paper clips, post-its, and office supplies.

And now everyone has it. The city is stricken with the common cold.  And I’m surprised there’s not a quarantine.

And so I am coughing and drinking Cold-Eeze and wondering if there’s a yoga pose that will banish the cold.  Meanwhile, I’m making a list of novels with memorable scenes of illness.  Alas, I cannot remember many scenes with the common cold.

1.  In Pride and Prejudice, Jane Bennet catches a violent cold while visiting Miss Bingley and Mrs. Hurst at Netherfield Park, the home of her future fiance, Mr. Bingley.  She becomes so ill that they refuse to let her go home and she sends a letter to her sister Elizabeth.

“I find myself very unwell this morning, which, I suppose, is to be imputed to my getting wet through yesterday. My kind friends will not hear of my returning till I am better. They insist also on my seeing Mr. Jones—therefore do not be alarmed if you should hear of his having been to me—and, excepting a sore throat and headache, there is not much the matter with me.—Yours, etc.”

2.  In Turgenev’s On the Eve, the  heroine, Elena, an intense young woman who wants a purpose, falls in love with Insarov, a Bulgarian revolutionary, and educates herself about the cause.  Alas, he catches pneumonia, and though he recovers for a time, he does not live long.  Elena is heartbroken but she lives to fight another day.

‘Elena!’ sounded distinctly in her ears. She raised her head quickly, turned round, and was stupefied: Insarov, white as snow, the snow of her dream, had half risen from the sofa, and was staring at her with large, bright, dreadful eyes. His hair hung in disorder on his forehead and his lips parted strangely. Horror, mingled with an anguish of tenderness, was expressed on his suddenly transfigured face.

She fell with a scream on her knees, and clung to his breast.

‘It’s all over,’ repeated Insarov: ‘I’m dying… Good-bye, my poor girl! good-bye, my country!’ and he fell backwards on to the sofa. 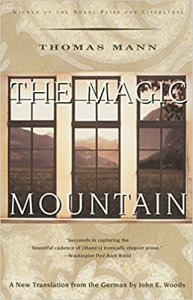 3.  In Thomas Mann’s The Magic Mountain, the hero, Hans Castorp, visits his tubercular cousin at a sanatorium in the Swiss Alps, and laughs at the easy life-style there before he, too, is diagnosed with TB.

It would not have taken much for Hans Castorp to be seized by another fit of laughter.  “What?  You lie out on your balcony rain or shine, night or day?” he asked, his voice wavering on the edge.

4.   In The Painted Veil, one of my favorite novels by W. Somerset Maugham, Kitty’s husband Walter is furious when he learns she has had an affair.  He takes her with him to mainland China, where he must deal with a cholera epidemic.  Needless to say no one is safe from the cholera, but Walter and a group of nuns put up a good fight. Kitty wants to help the nuns.

“There is no need to scrub the floors.  That is done by after a fashion by the orphans.”  She paused and looked kindly at Kittty.  “My dear child, do you not think that you have done enough in coming with your husband here?  That is more than many wives would have had the courage to do, and for the rest how can you be better occupied than by giving him peace and comfort when he comes home to you after the day’s work?  Believe me, he needs tthen all your love and consideration.”

5. I’ve run out of respiratory illnesses and cholera and am on to a zombie novel.  There is some beautiful writing at the beginning of Carrie Ryan’s  The Forest of Hands and Teeth:

My mother used to tell me about the ocean.  She said there was a place where there was nothing but water as far as you could see and that it was always moving, rushing toward you and then away.

The narrator, Mary, has grown up in a village behind a fence, to secure the villagers from zombies, known as the Unconsecrated, who infect human beings with  their bites.  After her mother becomes a zombie, Mary becomes an outcast.  The Sisters, a group of secret-loving nuns who know the true history of the world, shelter her for a while after her mother “turns”–her mother chooses to become a zombie rather than to die.  Although Mary is badly treated by the Sisters, she learns that the nuns have contact with the outside and that a young woman named Gabrielle has come in with news.  Is there any hope?  Not much.

6.  Graham Greene’s A BURNT-OUT CASE deals with leprosy, but I’m too tired to write about it!

THIS IS A SHORT LIST BECAUSE I’M SICK, BUT TELL ME YOUR OWN FAVORITE NOVELS WITH MEMORABLE SCENES OF ILLNESS!

26 thoughts on “What to Read When You’re Ill: Novels with Memorable Scenes of Illness”