Yesterday I took a bike ride.

I It was 88 degrees, but it has been so hot that it felt cool.  Although the trees have that frumpy end-of-summer look, it’s lovely to pedal through the woods.  But then, despite frequent breaks to guzzle water, I registered that I was riding unusually slowly. And so I took a coffee break in an air-conditioned cafe.  All better, I thought as I walked into the heat.  But I was so exhausted on a steep hill that I got off my bike and walked.  That NEVER happens.

It was a biking breakdown, obviously. Too hot, too long.   Once home, I sat on the couch and drank water for two hours. My husband went off to buy me a huge bottle of Diet Coke.  Did I get off the couch at all?  No, except to make dinner–just to prove I was not defeated.

I spent hours reading, but I discovered that you don’t want to read anything too demanding after an exercise breakdown.

FIVE  BOOKS TO READ AFTER A BIKING BREAKDOWN! 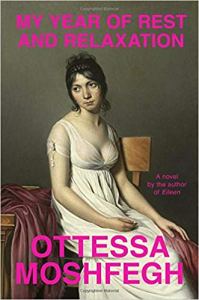 1.  My Year of Rest and Relaxation by Ottessa Moshfegg.  Oblomov meets Gogol in this dark comic novel about a young woman who decides to sleep for a year.

The narrator is beautiful, blond, and smart.  Everyone does her bidding because she is always the prettiest one in the room. Her best friend says she looks like Kate Moss.   But  her parents have died, her boyfriend doesn’t love her, she disdains her only friend,  and she has a ridiculous job as a receptionist at an art gallery.  When she inherits money, she decides she wants to sleep in her expensive Manhattan apartment for a year. A psychiatrist prescribes many drugs for her “anxiety,” most of which make her sleep.

The narrator is unsympathetic, but the book is very, very funny; at the same time horrifying and sad.  One of the drugs causes blackouts during which she wakes up to find she has shopped (where did she get the white fur coat?), gone to clubs, and ordered Thai food.  Things get darker, darker, and darker.

A very fast read by the winner of the PEN/Hemingway award for her first novel, Eileen. 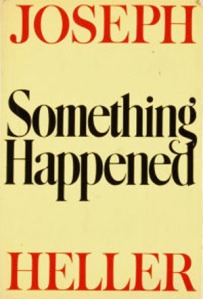 2.  Something Happened by Joseph Heller.   Who can ever forget Catch-22, the satiric American classic about World War II? (If you like Evelyn Waugh’s Sword of Honour trilogy, you should enjoy Heller’s novel.)  But I used to swear that Heller’s second novel, Something Happened, published in 1974, was even better.  Was I right?

Heller satirizes the discontent of an  American middle-aged man, Bob Slocum, who is living a life of quiet desperation but at least has a sense of humor about it.   He would rather be at his horrible office than at home with his family, and isn’t that the American way?  Fans of Mad Men will love the atmosphere, but I have to warn you, NOTHING HAPPENS. It is essentially a monologue by the narrator Bob Slocum.  Kurt Vonnegut wrote in The New York Times in 1974:

“Something Happened” is so astonishingly pessimistic, in fact, that it can be called a daring experiment. Depictions of utter hopelessness in literature have been acceptable up to now only in small dose, in short-story form, as in Franz Kafka’s “The Metamorphosis,” Shirley Jackson’s “The Lottery,” or John D. MacDonald’s “The Hangover,” to name a treasured few. As far as I know, though, Joseph Heller is the first major American writer to deal with unrelieved misery at novel length. Even more rashly, he leaves his major character, Slocum, essentially unchanged at the end.

3. An Informal History of the Hugos:  A Personal Look Back at the Hugo Awards, 1953-2000 by Jo Walton.  The Hugo Award is the only fan-voted and fan-administered science fiction award.  If you’re a literary award junkie, you will devour this even if you’re not an SF fan.  Walton, a brilliant writer, critic, and Hugo Award-winning SF writer, has an unusual approach to analyzing the process of nominations.  She criticizes not only the winners but looks at many great books that might have been equally deserving.

She writes in the introduction:

I don’t think the best novel always wins. I think it’s very hard to say what the best book of the year is. Most years, there’s no single obvious best. It’s much easier to say what the top five are. I thought it might be interesting to take a historical look at the individual years and consider what was nominated and what won, to look at what else could have been nominated and wasn’t, and how well the selected books have stood the test of time. I wanted to look at the nominees to see whether the Hugos were picking the best five books, not only at the winners. It’s easy to find consideration of Hugo winners. I wanted to do something different—to revisit the winners and nominees in context.

4.  They Walked Like Men by Clifford D. Simak.  To my knowledge, no one on Earth (maybe on Mars) ever reads this science fiction classic.  Originally published in 1962, it has been out of print since  1979.  This radical satiric novel questions the wisdom of urban sprawl, the cynical practices of real estate czars, and suburban flight to…well, nowhere.  Everybody should have a copy of They Walked Like Men. You never know when Earth will be taken over for its real estate.

5. This Rough Magic by Mary Stewart.  Set in Corfu, this brilliant Gothic is a homage to The Tempest. The narrator, Lucy,  an unemployed actress, decides to join her pregnant sister, Phyllida, the wife of a rich banker, on vacation at a villa in Corfu.  There is beautiful scenery but many strange events:  the maid’s son drowns on a boat trip with an English photographer, someone shoots at a dolphin while Lucy is swimming near it in the sea, and the moody behavior of a composer, Max, who lives in a villa up the hill, seems strange:  does he have something to hide?  But Max’s father, a retired actor she has always worshiped, is charming.  When Lucy learns about a smuggling ring, she makes some very smart decisions.  But are they smart enough?