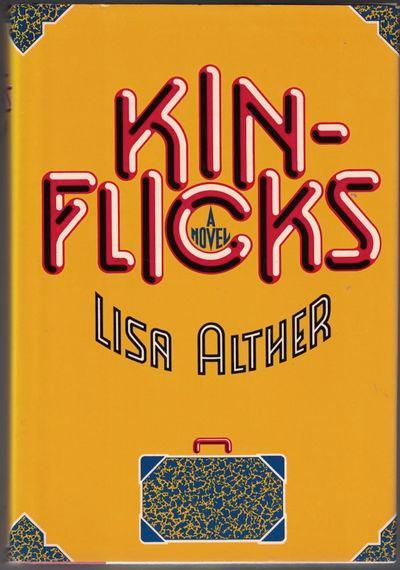 Sometimes we forget women are accomplished satirists.  Satirist is not on the approved list of women’s roles:   daughters, caregivers, friends, confidantes, girlfriends, sluts, wives, housekeepers, mothers, good listeners, and wage earners. And so we find ourselves saying to a shoplifter,  “There, there.”  Baffling, isn’t it?

And we turn to satire.

I am rereading Lisa Alther’s underrated Kinflicks, a riotously funny novel about women’s changing roles and sexual identities in the 1950s and ’60s.  And I am also reading Lexi Frieman’s new novel,  Inappropriation, a satire of identity politics.  These books have more in common than you would think. 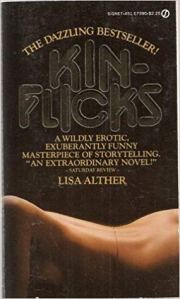 Let me start with Kinflicks, published in 1975.  The narrator, Ginny Babcock, has returned to her hometown, Hullsport, Tennessee, because her mother in the hospital.   The mother and daughter have a complicated relationship:  both have plenty of complaints.  But Ginny is the real protagonist, a refugee from the South who hasn’t found her identity yet.

As Ginny drives around her hometown, she has flashbacks to the past.  She has morphed from a flag-waving cheerleader to black-clad girlfriend of a motorcycle-riding delinquent to intellectual at a women’s college to lesbian feminist to cheating wife and ambivalent mother.

Her father, the Major, was always trying to straighten her out, and, ironically, his controlling personality drove her away from home.   After a motorcycle accident, he pressured her to apply to a women’s college,  Worthley College.  She tried to get herself rejected at the interview.

In a last-ditch effort of defiance, I wore a black, too-tight straight skirt; a black cardigan buttoned up the back with a Do-It Pruitt pointed bra underneath; Clem’s red dragon windbreaker, the tatters of which I had carefully stitched together upon finding them among Mother’s cleaning cloths; black ballet slippers; and Clem’s huge clanking identification bracelet.

But no matter what Ginny does, she succeeds, and she found herself at Worthley.  Whether she’s studying philosophy or living in a commune, she gives it her all.  But Alther is a wicked satirist.  When Ginny’s overbearing lesbian girlfriend is decapitated in a snowmobile accident, it is irreverently funny–plus accidents like that are common. 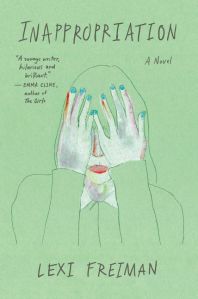 I am about one-third through Lexi Frieman’s new satiric novel, Inappropriation. Is it Kinflicks for Millennials?   Ziggy, the Australian Jewish teenage heroine, has just started attending Kandara, a girls’ school whose class hierachy disappoints her. There are the Cates (a clique of rich, entitled debutantes), the rugby players, whom she describes as “hypermuscular Anglo-Saxonites,” the brilliant Asians and the cool, homework-averse Asians, the “unsalvageable spinsters,” and “the large-boned unpretty.”

Soon Ziggy befriends two girls, Tessa, who has a prosthetic arm and “identifies as cyborg,” and Lex, who wants to be a rapper and is banned from school recitals.  After their first  conversations, Ziggy researches genderqueerness at Wikipedia. And after chatting and posting all night at a queer social media site, she decides “the only category she can commit to with any confidence is bisexual gender queerness.  A kind of placeholder….  If she is genderqueer, Ziggy doesn’t need to take hormones or wear a baseball cap or even call herself a he.”

So far the character who gives the best advice is Rowena, a trans woman in Ziggy’s New Age therapist mother’s annual menarche workshop. (Rowena cannot menstruate but experiences the symptoms; Ziggy does not menstruate.). When Ziggy corners Rowena,  she advises Ziggy to be herself and not commit to someone else’s definition of identity.

Inappropriation is comical, but it is also stark.  It lacks the joy of Kinflicks.  I am not sure I’ll have time to finish this, but I am quite sure some of you would love it.