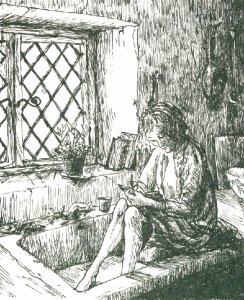 Dodie Smith’s I Capture the Castle and The New Moon with the Old are incomparably charming.  I often reread favorite scenes:  the scene in I Capture the Castle where Rose and Cassandra are mistaken for bears because they are wearing their late aunt’s unfashionable antique fur coats; and the scene in The New Moon with the Old where Clare  jokes that the only job she is qualified for is “king’s mistress,” because she has read so many Dumas novels.

But whom do you read after Dodie Smith?

I have turned to Elizabeth Goudge, another witty, spellbinding storyteller of the 20th century.  You don’t see her books anymore, but our public library still has her enchanting children’s novel, The Little White Horse, which won the Carnegie Medal for British Children’s Books in 1946.  The first Goudge I read was her adult novel, Green Dolphin Street, which is a bit like Gone with the Wind set in New Zealand; it won the Literary Guild Award in 1944 and was adapted as a film.  (I’d love to see the film.) 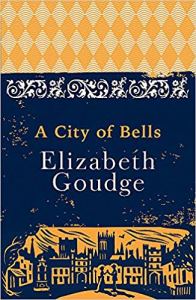 I recently reread A City of Bells, set in Torminster, a Cathedral town based on Wells in the UK.  I thoroughly enjoyed this well-written novel, with its sharp dialogue and lyrical descriptions of the city.  One of the main characters, Jocelyn Irvin,  has been physically and psychologically damaged in the Boer War.  He has no vocation, so he goes to Torminster to stay with his grandfather, a canon of the cathedral. And while there he falls in love with Felicity, a gorgeous, charming actress who is visiting her aunt.  Due to the influence of Felicity and Grandfather, he opens a bookshop.  And there he finishes the manuscript of a poem by the former tenant;  he and Felicity produce it as a play in London.  When Jocelyn goes to London for rehearsals,  Grandfather runs the bookshop.

I know this quote will make you laugh.

…Joceylyn was obliged to leave the shop to the care of Grandfather, the children, and Miss Lavendar on at least three days a week … Grandmother was outraged … That she should live to see her own husband on the wrong side of a counter was really the last straw in a married life strewn with straws.  “A Canon of the Cathedral serving in a shop,” she said indignantly to Jocelyn.  “I never heard of such a thing in my whole life.  What the Dean thinks I don’t know and don’t want to know.  And what your poor Grandfather, who has never, let me tell you, been able to subtract a penny from three-halfpence since the day he was born, gives in the way of change I’m sure I don’t know.”

I am surprised at how well Goudge’s books have stood up. Some passages are Dickensian, some are graceful, others sentimental.  My favorite Goudge is The Scent of Water, a  novel about a professional woman in London who inherits a house in the country from a relative she saw only once as a child. When she decides to move there, friends tell her it’s a bad decision, but she comes to terms with herself as a person rather than as a financially successful woman without a personal life

What is your favorite comfort book?  And whom do you read after Dodie Smith? 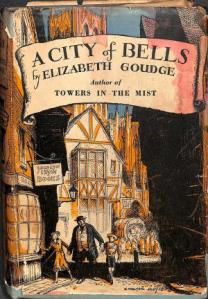 12 thoughts on “Whom Should You Read after Dodie Smith? I Say Elizabeth Goudge”