Recently I visited the Women’s Archives at the University of Iowa Libraries and read old issues of Ain’t I a Woman?, a feminist newspaper published by a collective in Iowa City (1970-74).

The anonymous writer of “Notes on Cutting My Hair” was not quite s Second Wave Feminist Delilah, but she analyzes the meaning of the length of women’s hair.  She begins by describing her own sensual waist-length hair, worn in three braids pinned up on her head.

Then feminists in Iowa City began to experiment with very short hair, changing their trademark look from feminine “freak” (“hippie” is the media word) to a bold statement about feminists defying fashion. Impressed by a friend (housemate?) who dared to cut off all her hair, the narrator had hers cut to her shoulders.  Then she attended a conference in Grinnell and noted, “Ann’s hair was really short,”  and everyone was talking about the “Iowa City haircut.” Then the scissors came out.

Her very short hair changed the way she related to others.  A male professor whom she disliked no longer counted on her half-flirtatious deference.

When I walk through the commons, I feel much less on display.  I’m freer to look for people I know, walking through is now more my business than the business of people who are looking at me, and if people watch me I don’t care.  I’m not touched by it…  Much less do I see myself as others see me, and operate either in agreement with that image or defensively against it.

I knew so many women with Iowa City haircuts.

I had an Iowa City haircut, too.  One day I was eating dinner with friends when a strip of fly paper fell from the ceiling into my hair.  It was agonizing, all that goop in my hair.  I had it trimmed to my shoulders.  Then, a few months later, when I noticed some stylish feminists wearing short hair, I  had it cut very, you know, pixieish.  Did I read this essay in AIAW?  I can’t remember.

I had very mixed feelings about my short hair.

My women friends approved of the new look:  both heterosexual and lesbian feminists understood the significance of flouting fashion.  Why should we spend all that time on our hair and clothes?

Sometimes I loved my short hair, sometimes I hated it.

Ssometimes, missing my long hair, I wondered if this fashion was a throwback from dyke- (a word the lesbians used a lot) to bulldyke-.

I didn’t say that aloud.

The anonymous writer of the article felt more confident with short hair, but I felt more vulnerable with men. One man told me, frowning,  “You really changed yourself.” On the other hand, a boy at school said he’d never noticed me before and now thought I was beautiful.  And when I told my husband about this AIAW essay, he speculated that the short hair might have backfired and men paid them more attention.  Well, I think in general not.  Confronted with a woman with long  hair and a lot of makeup, and a woman with an Iowa City haircut and no makeup, guess whom they’re more likely to pick?

I have grown and cut my hair and grown it back and cut it many times in my life.

Every woman, whether feminist or not, knows her hair can define her, and “Notes on Cutting My Hair,” about a specific moment in Iowa City women’s history, provides a feminist perspective.

I planned to do some research in the Women’s Archives at the University of Iowa Library.

The library was eerie, the first floor under construction with plastic sheets for walls and wires popping out everywhere.

The Special Collections rooms on the third floor were closed.  It hadn’t occurred to me that they would be closed on Saturday.

It was raining so hard that I didn’t feel up to leaving the library right away.

I lounged around on the fourth floor with some classical journals.  I read a few articles and reviews.  And then I came across an article that all of you will want to read, because it is very, very funny: Monica S. Cyrino’s “I Was Colin Farrell’s Latin Teacher” (Classical Journal, Feb./March 2012, Vol. 107/No. 3).

Monica S. Cyrino, a classics professor at the University of New Mexico with an interest in film, received an e-mail from a producer asking her to write a few lines of Latin dialogue for Colin Farrell.  He was playing a vampire in  a remake of the movie, Fright Night. (The film was being shot in New Mexico because of the state’s tax breaks.)

Farrell, who is a bibliophile (one of Cyrino’s students spotted him buying poetry books at a Barnes and Noble), thought his seduction lines would be sexier in Latin.  As he dropped onto a dance floor and whisked away a teenage girl, he was supposed to say:  “You just need a taste.  You’ll see.  It can be like a dream.”

Cyrino translates the Latin with a graduate students, and is invited onto the set to meet Farrell, but there is a lot of hanging around, and since Farrell, his stand-in, and his stunt double all wear black jeans and a black shirt, it is difficult to tell one from another.

She has just reached into a cooler to get a bottle of Evian when Joy Ellison, his vocal coach, brings Farrell over to meet her.  “Nice to meet you, love!”

My hand was still stuck in the cooler.  I yanked it out and held it in front of me, dripping wet and frozen, and for a minute I was in a state of acute aporia.  Should I wipe my soaking hand on the $300 cashmere top that I had so insouciantly donned for the day?  Or should I give my cold, wet hand to Alexander the Great? 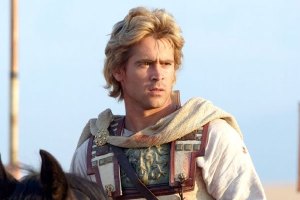 “You’re on set all day, right, love?  Will you be here later so we can talk about the Latin scene?”

Later they go over the sexy Latin together, and he asks her if they can reverse the last two words, so the line ends with the word somnia (dreams):  Solum necesse est sapias.  Percipies.  Par ac somnia.

“It doesn’t change the meaning, now does it, love?”

And she immediately thinks he knows Latin, because how else would he know that?

“Nah, love…They stopped Latin and corporal punishment the year before I came up…and ya see how I turned out?”

All right, now here’s what I’m thinking.  He’s teasing her!  Because, honestly, if he doesn’t know any Latin, why would he want Latin in a vampire movie? How would he know about the Latin word order?

(The Latin lines were cut from the film.)