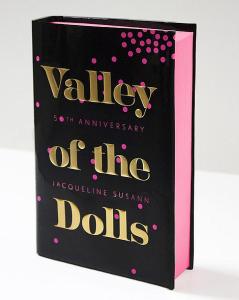 Yes, it’s trashy, but it’s also great, and it tapped into the zeitgeist  in 1966.  As a fan of pop women’s fiction, I was interested to read in The New York Times that a 50th anniversary edition of Jacqueline Susann’s The Valley of the Dolls will be published by Grove Press in July.   Judy Hottensen, the associate publisher of Grove Atlantic, told the Times  she hopes it will appeal to young women raised on “Girls” and “Sex and the City.”

It took me many years to get around to Valley of the Dolls, and it pleasantly surprised me.  Susann’s pop classic proceeds along the lines of Nancy Hale’s The Prodigal Women and Mary McCarthy’s The Group: it is the story of three young women who move to New York, become friends at the beginning of their careers, and climb the ladder of the entertainment industry, not without much popping of pills.  Anne, the emotionally stable one from New England, works as a secretary and then becomes a model.  She doesn’t need pills (well, only very briefly).    But you can imagine what the pills do to Neely, the Broadway star who becomes a screaming home-wrecking harridan, and Jennifer, the lovely, sweet,  pill-dependent woman who decides to act in French art films because no one values her for anything except her body.

Here’s the jacket copy from my old paperback:

Dolls: red or black, capsules or tablets, washed down with vodka or swallowed straight–for Anne, Neely, and Jennifer, it doesn’t matter, as long as the pill bottle is within easy reach. These three women become best friends when they are young and struggling in New York City and then climb to the top of the entertainment industry–only to find there’s nowhere to go but down–into the Valley of the Dolls.

All right, this book is not for everybody–but it is for the beach!

2 in The New Republic, Maggie Doherty says Kate Millet’s best-selling 1970 classic of feminist criticism, Sexual Politics, still speaks to us.  (I read this in the seventies, and though I certainly didn’t agree with Millet about D. H. Lawrence, I thought she was astute about Henry Miller and Norman Mailer.)

3 Barbara Ellen at The Guardian thinks that single women now have things harder than Bridget Jones did in the ’90s. She writes, “The issue is that Bridget Jones is a true creature of the 1990s, and the 1990s not only seem a painfully long time ago, but painfully innocent, too.”

One day a friend in her fifties, feeling confident and beautiful, walked along the beach wearing a bikini.  A young man came up behind her and then blanched when he saw her face.

“That’s when I knew I was middle-aged,” she said.

Many of us have moments like this, but we secretly remain confident, loving our crow’s feet, our gray hair, and our bodies.

And so a lot of us are laughing aloud at the moxie of Bridget in Helen Fielding’s new novel, Bridget Jones:  Mad About the Boy.

Bridget, 51, now a widow and a single mother, is attempting to get out of the house and meet men.  It is a jungle in clubs and on Twitter and she makes many faux pas.   She tells “Leatherjacketman,” a man she meets at a club, that she hasn’t had sex in four and a half years.  And when she is on a date with a younger man, he takes away her phone so she won’t tweet the whole date.

Reviewers hate this book, and why it should be reviewed in the first place–it’s light, it’s charming, it’s not literature–I do not know.  It is not a comedy in the class of, say, Cathleen Schine’s The Three Weissmanns of Weissport, a retelling of Sense and Sensibility.  If reviewers expect Bridget to be a role model, they are not good readers.

While parenthood and profound loss may have forced Bridget to grow up in some ways, she hasn’t grown up much. And that’s one of this novel’s key problems. Readers may expect a middle-aged woman who has dealt with such loss to have lowered her narcissism levels a tad. Not Bridget Jones . . . or, pardon me, ­@JonesyBJ.

Bridget is middle-aged, not dead.

Bridget is still in what I call the flirt zone, and that, too, is a problem for some reviewers.  One of Bridget’s suitors is 21 years younger, and of course we know it won’t last.  But, as Bridget points out, younger men like older women because they’re “refreshingly not looking to them to be bread-winners and not thinking about babies any more.”

And Bridget says of the fifties:

It used to be the age of Germaine Greer’s ‘Invisible Woman,’ branded as non-viable, post-menopausal sitcom fodder. But now with the Talitha school of branding combined with Kim Cattrall, Julianne and Demi Moore, etc., is all starting to change!

Reading about middle-aged women is empowering for those of us who are middle-aged.   Though women are believed not to age as well as men, that is probably a power thing:  we’re still doing everything we’ve always done, just as middle-aged men are.  And,  frankly, we  want to read about people our age now and then.  Young men and women can be…well…boring…if very sweet.

I have enjoyed other novels about aging women. 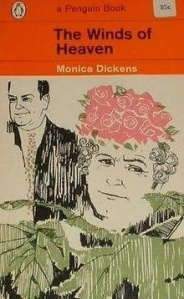 In Monica Dickens’ The Winds of Heaven, Louise Bickford, a 57-year-old widow, spends part of each year living with each of her three daughters.  (Thank God I didn’t reproduce, though I’ll probably regret it in old age.)   She spends the winter at a hotel owned by a friend who doesn’t want her.

In London, which seems unbearably exciting and sophisticated to Louise, she waits in a tea room for her daughter, wishing she were more attractive.

“Louise was always much concerned with how people were thinking of her and summing her up; not knowing that a small, middle-aged woman with stubby features and hair no longer brown and not yet grey usually goes unnoticed.”

But she does attract Gordon, a fat mystery writer, whom she meets in a tea room.  She has read his books.  They become good friends.

And Louise gradually finds herself.  This is a charming comedy-drama, not great literature, but entertaining.

Of course Colette’s Julie de Carneilhan is great literature, not a pop novel.  Julie, the beautiful heroine, in her early forties, still regrets her divorce from her second husband, Herbert.  Her brother tells her that people will talk if she goes out partying with her younger boyfriend, Coco, while Herbert is very ill.

Julie asks, “Am I expected to put on mourning in advance for a man who was unfaithful to me for eight years and has been married again for another three?”

She is bitter but deeply cares for Herbert, and has a revelation when she visits him.  This is a graceful, lyrical novel about the consequences of divorce.

I’m always interested in “middle-aged” literature.  So what are your favorite books about middle age and old age?  (And I don’t mean that book about menopause that recommends we have an orgasm a day to stay healthy.  I’m still laughing about that.)

Today, a perfect gray fall day for curling up with a good book, I read Horace’s Odes and Epodes and mused about the women in his poetry.

Horace dislikes older women, which is perhaps not unusual, though we don’t often read about it in poetry.

In the elegant, if angry, Ode I.XXV, Horace addresses an aging woman, Lydia.  He says that young men bang less often on her shutters than they once did; they no longer deprive her of sleep.  Does Lydia miss this, I wonder?   Now “the door loves the threshold, while before it often moved on its hinges.” That is a sexual metaphor in Latin poetry.  Whenever they talk about doors…

I wonder whether the windows and doors are really open for women today in the age of “hook-ups,” or whether choices are narrower and cause more anxiety.   In the late twentieth century men never banged on our windows, though they banged on the door sometimes. Once my boyfriend and I were sleeping when a strange man turned on the light.  Oh, sorry, he was looking for my roommate.

My roommate was really more the Lydia type than I. Men might have serenaded her, as the young men do in Horace’s Lydia poem, in the days before the Pill, if we had been adults then;  I was as far from Lydia as one could get, the type who hung out at the coffeehouse, chatted nonstop, sat through Days of Heaven again and again, and went jogging.   One day my roommate informed me that I “owed” her and must attend a champagne breakfast and go out on a boat with her and two of her men friends.

This spawned my famous dating advice, “Don’t get on the boat.”  Once you are on the boat, you are likely to be bored for hours, because there you are, with nothing to do but drink beer…  The champagne is gone.  You have little in common with the guys.  Sure, they are nice, and I appreciate the invitation, but…

Horace doesn’t give dating advice.  He complains instead about impotence with older women.  I would now, according to his calculations, be an older woman,  because I am  older than Lydia, who might not have lived to be very old back in Rome of the first century B.C.

In Epode XII, an early, rude poem, he complains about a woman’s wrinkles and smell.  This is David West’s translation.

The sweat and nasty smell get worse all over
her wrinkled body, as my penis droops
and raging passion cools
and all the while the powdered chalk
and crocodile shit run on her face as she ruts away…

And one can see why we didn’t read Horace’s early poems, the Epodes, in grad school.  About one-third of us were women, and we would have been terribly offended.  I am not shocked by poetry nowadays.   One can see the greatness of his poem about Lydia, the second-rate-ness of the Epode.  Did one come from the other?

And in Epode II, he again is impotent, and again complains.

You dare to ask me, you decrepit, stinking slut,
what makes me impotent?
And you with blackened teeth, and so advanced
in age that wrinkles plough your forehead,
your raw and filthy arsehole gaping like a cow’s
between your wizened buttocks.

Not quite the gorgeous language one would expect in poetry.

Ode I.XIII is another graceful poem about Lydia, or at least a Lydia (I’m not sure if it’s the same one, and I have no reference books about Horace).  Again, what a difference between the Odes and the Epodes.  The following literal translation is my own, and captures the shortness of the lines, though certainly not the grace.

And something else perhaps swells too.  That is the way Roman poetry works.  That is what the word tumet (swells) implies.  Catullus, Horace, and Ovid used it, as critics tell us.  The poets were  risqué.

Anyway, it’s been an interesting, quiet day of Latin, not answering the phone, and considering the way women live now and the way we don’t.

N.B. Bridget Jones:  Mad About the Boy is being trashed online by both men and women, partly a copycat effect, I think.  Bridget is condemned for being an older woman with a sex life.  This charming novel, which should be passed around instead of reviewed, is making me laugh out loud.

What do you think of views of aging women in our times?